GET NEWS AND ARTICLES IN YOUR INBOXPrint
A
A
Home | Mises Library | The Fed: Reality Trumps Rhetoric 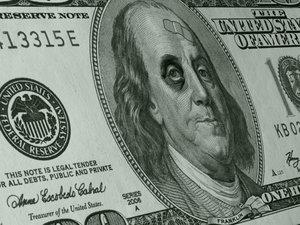 [This article is excerpted from the December issue of The Free Market, and is adapted from the fifth chapter of 2014's The Fed at One Hundred, edited by David Howden and Joseph Salerno.]

Throughout the existence of the Fed, its officers and intellectual supporters understandably asserted that the government’s movement toward central banking was a most beneficial evolution. In a 1948 issue of The Federal Reserve Bulletin, for example, Fed Chairman Thomas B. McCabe asserted that money production could not manage itself, so we need a central bank such as the Fed that acts for the public interest. Nearly three decades later, the venerable Arthur Burns claimed that the basic assets of the Fed are concern for the general welfare, moral integrity, respect for tested knowledge, and independence of thought.

The alleged benefits from a Fed-managed elastic money stock became the standard justification for the Fed in later propaganda. Again in 1948, Fed Chairman McCabe asserted that a lack of a central bank caused a continual threat of financial panic, but the Fed put an end to this danger — a rather cheeky claim to make only a few years after the Great Depression. Subsequent Fed Chairman William McChesney Martin claimed that the Fed was designed to minimize panics and crises due to irregularities in flow of money supply and make the monetary system function more smoothly, but that a gold standard was too rigid.

In 2013, Chairman Ben Bernanke likewise told college students that “financial stability concerns were a major reason why Congress decided to try to create a central bank in the beginning of the 20th century.”

Alas, from the beginning, reality diverged from Fed rhetoric. What the Fed claimed it did and would do sharply differed from what it actually did and from the consequences of its actions. Instead of preventing and ameliorating crises, it caused and aggravated them. Instead of fighting inflation, it was inflation’s fountainhead. Instead of remaining politically independent, it served politicians.

While it was originally claimed that the Fed would make financial and economic crises impossible by supplying an elastic money stock, in reality, from the beginning the Federal Reserve System was deliberately designed as an engine of inflation to be controlled and kept uniform by the central bank.

As one might expect as the money supply increased continually over the past century, the purchasing power of the dollar collapsed relative to what it was the century before the Fed. The consumer price index was 22.8 times higher in June 2013 than in January of 1913.

In light of the historical record, concerns about price deflation should be laughable. Noticeable price deflation has occurred only three times over the past one hundred years. The Fed allowed for price deflation in the wake of the 1920–21 recession, which is why it was over so quickly. It was ineffective in stopping monetary and price deflation in 1931–33 even though it was not for lack of trying.

The Fed Fails to Prevent Crises

The financial meltdown of 2008 is merely the most recent economic debacle fostered by the Fed. Less than eight years after its origin, a Fed induced inflationary boom set in motion the recession of 1920–22. Fed inflation in the mid-to-late 1920s ushered in the recession that turned into the Great Depression. After World War II the Fed oversaw inflation and recession during the 1950s. By 1963 Fed-backed inflation so far outstripped the U.S. stock of gold that it was nowhere near large enough to cover our obligations under the Bretton Woods system. The situation was so bad, in fact, that the U.S. Treasury was compelled to borrow abroad in money other than dollars because of foreign lack of confidence in U.S. currency. The Fed prevented neither the stock market crash of 1987 nor the collapse of the hedge fund Long Term Capital Management. Immediately after the great stock market crash of 1987, then new Federal Reserve Chairman Greenspan, assured investors that the Fed stood ready to provide whatever liquidity was necessary to keep the markets afloat. The Fed’s solution to the 1990s recession and Mexican Peso crisis was more of the same — monetary inflation via credit expansion.

Investors flush with new cash were looking for opportunities and became hip to the next big thing: technology and the internet. Fed inflation in the 1990s led to the tech-stock bubble and subsequent recession of 2000. The Fed again responded by doing what it does best: assuring investors, expanding credit and increasing the money supply and repeated its “accommodation” after the 9/11 terrorist attacks. Many investors, bitten by the tech crash and induced by various lending regulations, directed their new money into real estate and then mortgage backed securities and financial derivatives based on these securities. Capital was malinvested again resulting in the Great Recession and the worst of crony capitalism.

Economic history demonstrates that not only has the Fed not provided economic stability, again and again it has introduced instability and economic destruction through its inflationary credit expansion and interest rate manipulation.

For 100 years the Fed has proclaimed its econonomic indispensibility. The picture it paints of a world without the Fed is a dystopian one in which society is left lurching from recession to recession, alternately experiencing runaway inflation and high unemployment. Thanks to the Fed, it is claimed, we instead enjoy sound money, fewer recessions, high employment, stable prices, and increased standards of living. In other words, the Fed is absolutely necessary for full-orbed macroeconomic stability.

Economic reality teaches a vastly different lesson, however, because the laws of economics have a way of impinging on statist rhetoric. The history of the Fed has been one of monetary inflation, higher overall prices, diminished purchasing power, economic depressions, and lost decades. In 1913 the state sowed the inflationist wind and for a hundred years we have been reaping the economic whirlwind.