GET NEWS AND ARTICLES IN YOUR INBOXPrint
A
A
Home | Mises Library | Farewell, Richard Posner 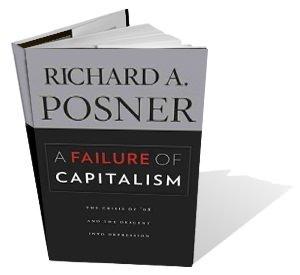 Tags Media and CultureOther Schools of ThoughtPhilosophy and MethodologyPolitical Theory

[A Failure of Capitalism: The Crisis of '08 and the Descent into Depression • By Richard Posner • Harvard University Press (2009) • 368 pages]

With his latest book, A Failure of Capitalism, Richard Posner has lived up to his oft-maligned reputation as a provocateur. Coming from a man who is the founder of the law-and-economics movement and an elected member of the Mont Pelerin Society, the sensational declaration that capitalism has failed will surely raise eyebrows. But Posner's musings, besides being premature, too often reek of false starts and gross prevarications.

We libertarians should commend Posner, one of the most original thinkers of our time, for his longstanding rejection of groupthink and for his refusal to conform to hackneyed ideologies. Nevertheless, we must also bid him farewell. This latest book, a career about-face, will do little to help those affected by the crisis. It will even hurt them further.

Posner suggests that, rather than euphemize, we call a spade a spade: the financial downturn is a depression, not merely a crisis. He insists on the unpalatable term "depression" because the current troubles far exceed any modest slump of recent decades and have precipitated government intervention unrivaled since the Great Depression. Posner is probably right on this score.

He's often right in his critique of the housing bubble as well, even if he fails to fully account for government's role in subprime mortgage loans: hyping home ownership, slashing interest rates, channeling artificial demand into the housing industry, and so on. Posner's thesis — that the depression represents a market failure brought on by deregulation — pivots on the myth that regulators actually regulate rather than serve the interests of leviathan beneficiaries (i.e., their cronies and themselves).

As for this latter point, Posner does acknowledge, among other things, that the SEC was bound up with agents of the private-securities industry despite its obligation to enforce federal security laws. All the same, he does not adequately deal with this problem or even the related problems involving government-sponsored enterprises (e.g., Fannie, Freddie, and the like) that privilege the interests of the elite few at the expense of the many. Simply put, Posner ignores corporatism. I have neither the time nor space to undertake this issue here. For further reading, I recommend Thomas E. Woods's Meltdown, a short, well-reasoned book that is accessible to the layperson (like me).

Posner's proposal that "we need a more active and intelligent government to keep our model of a capitalist economy from running off the rails" seems quixotic at best. For an intelligent government (were there such a thing) would minimize rather than increase state impositions on the economy and would allow resources to flow from declining to expanding industries according to natural market forces.

Fraught with references to, and implicit endorsements of, Keynesian economics — the power of which, Posner claims, lies in its "simple, commonsense logic" — this book is a statist tour de force. Mario J. Rizzo has written at length about Posner's Keynesian conversion. Suffice it to say that Posner argues on the one hand that government can prevent depressions, and on the other hand that government failed to curb the recent economic downturn. This disjuncture begs the question: would more government bureaucracy and regulation have brought about a timelier and more coherent response? Is it not risky to put so much stock in something with such a volatile track record?

Posner submits that "conservatives," a strikingly vague term that he leaves undefined, argue that government triggered the crisis with "legislative pressures on banks to facilitate home-ownership by easing mortgage requirements and conditions." True, many self-described conservatives take this position. But Posner, apparently trying to cast these "conservatives" as hypocritical, indicts former President Bush for pushing homeownership as part of a compassionate-conservative agenda.

That Posner casts President Bush as the face of "conservative economics" (an oddly misleading category in itself) is not only telling but also, quite frankly, preposterous. For Bush — who championed massive government bailouts long before Obama — was hardly conservative in any small-government sense. He ran up budget deficits far greater than his predecessors, led us into two costly wars, and doubled the national debt. In light of these big-government flops, it seems outrageous for Posner to claim that "the way was open for a doctrinaire free-market, pro-business, anti-regulatory ideology to dominate the Bush Administration's economic thinking."

Posner achieves his goal of a "concise, constructive, jargon- and acronym-free, non-technical, unsensational, light-on-anecdote, analytical examination," but his hurried analysis is fatally flawed. Small wonder that his book has received little attention. Most likely dashed off on a tight deadline, it reads like several blog posts carelessly cobbled together (Posner admits in the preface that he's incorporated several blog posts).

Although we cannot fault him for the time sensitivity of his project, we can and should point out where the rush has taken its toll. At one point, for instance, Posner claims that the Democrats scored with the American public by bailing out the auto industry; shortly thereafter, he claims that the American public opposed the auto-industry bailout. In moments like this, Posner, having his cake and eating it too, disappoints over and over again.

Apparently flirting with supporters of both major political parties, he equivocates ad nauseam by spelling out a putatively conservative argument, a putatively liberal argument, and then his own argument, a convenient cherry-picking of the two. As another gesture toward mass audiences, he eschews footnotes and criticizes the economics profession — which he dubs an elite group of academics and finance theorists — for its apparent laxity and ineptitude. Posner's newfound populism, though, is unconvincing.

Even sympathetic readers will quickly tire of Posner's cocky rhetoric. Posner is — to the best of my knowledge — a magnanimous person with a genuine concern for the lives of millions of Americans, but his book, if heeded, will only exacerbate current conditions.

The Mont Pelerin Society declares that its members "see danger in the expansion of government." If Posner still shares this view, he has a funny way of showing it.