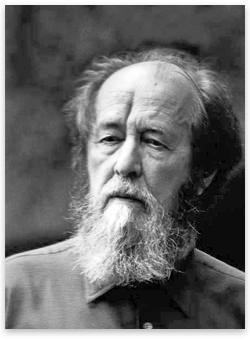 Aleksandr Isayevich Solzhenitsyn, writer, Nobel Prize winner, and the most famous Soviet dissident died at the age of 89 on August 3, 2008 in his home near Moscow. He lived a long and hard life, but he died the way that he wanted to: "He wanted to die in the summer — and he died in the summer," his wife Natalya said. "He wanted to die at home — and he died at home. In general I should say that Aleksandr Isayevich lived a difficult but happy life."

His entire life was a victory over the most improbable. Aleksandr Solzhenitsyn was born on December 11, 1918 in Kislovodsk in Southern Russia, half a year after his father died in a hunting accident. He managed to get a Soviet university education despite the fact that his mother Taisiya came from one of the richest families of Southern Russia and his father Isaakiy was an officer in the tsar's army.

Aleksandr was raised by his mother in abject poverty as his earliest years coincided with war communism and its abolition of private property (making economic calculation impossible); what followed was mass starvation and destruction. His family was no exception — their property was confiscated and later destroyed by central planners.

Solzhenitsyn stated in his autobiographical series of novels The Red Wheel that his mother was fighting for survival and they had to keep his father's background in the old Imperial Army a secret. Taisiya was well educated and openly encouraged her son's literary and scientific interests, while also secretly raising him in the Christian faith. He studied physics and mathematics at Rostov University before becoming a Soviet army officer after Hitler invaded Russia in 1941.

He was commissioned as a Soviet artillery officer during the Second World War despite the fact that he had previously been rejected due to poor health. A successful artillery captain, he was arrested by the secret police in 1945 for disrespectful remarks about Stalin in a letter to a friend.

Despite his eight-year sentence for hard labor (which was nearly a death sentence in Stalin's dreadful Gulag system), he managed to stay near Moscow in the government research facility for imprisoned scientists. Eventually he was transferred to the special Ekibastuz camp in Kazakhstan. In the Tashkent medical ward a malignant tumor was removed from his stomach in 1954, and he survived the tumor and the surgery against all odds.

After release from the Gulag in 1956, Solzhenitsyn returned to Central Russia, worked as a math teacher and began to write his powerful prose. "During all the years until 1961, not only was I convinced that I should never see a single line of mine in print in my lifetime, but, also, I scarcely dared allow any of my close acquaintances to read anything I had written because I feared that this would become known," he said in his autobiography. "Finally, at the age of 42, this secret authorship began to wear me down."

He published his first works, two novellas: "One Day in the Life of Ivan Denisovich," and "Matryona's House" in a literary journal Novyi Mir (New World) in 1962 with explicit approval by Nikita Khrushchev. These were the only publications of Solzhenitsyn in his own country until 1990.

In 1970, after publishing several works in the West, including the novel Cancer Ward — a fictional piece based on Solzhenitsyn's own treatment at the Tashkent cancer ward — he was awarded, while in exile, the Nobel Prize in literature. Solzhenitsyn didn't attend the ceremony in Stockholm, Sweden for fear that he would not be allowed to re-enter the USSR.

Three years later, his Gulag Archipelago was published in France. Immediately after this publication he was accused of treason, stripped of his citizenship, and deported to Germany. He wrote sarcastically: "For a country to have a great writer … is like having another government. That's why no régime has ever loved great writers, only minor ones."

He accepted an invitation to teach at Stanford University, and then moved to Cavendish, Vermont, where he lived with his family for years.

In 1990, his citizenship was restored by Gorbachev, and he returned to Russia in 1994 and actively participated in the reform process. He crossed the country that had already ceased to be the Soviet Union, from the East to the West, acquiring "a collection of cries and tears."

"It is history's sorrow," Solzhenitsyn wrote afterwards, "the grief of our era, which I carry about me like an anathema."

We will remember Solzhenitsyn as an unyielding champion of freedom who dedicated himself to revealing the horrors of socialism and exposing the ultimate evil of Lenin, Stalin, and their cohort of mass murderers. Once a prisoner of brutal labor camps himself, Solzhenitsyn chronicled the horrors of the Soviet Gulag system and emerged as a one of Russia's greatest writers. He became a moral and spiritual leader who exposed and condemned the nefarious nature of the socialist ideology that served as the basis for the monstrous communist slave camps established from Siberia to Ethiopia, Cuba to Vietnam, China, and Yugoslavia. He riveted socialists of all countries whose secret ghastly history he exposed.

"For us in Russia, communism is a dead dog, while, for many people in the West, it is still a living lion", wrote Solzhenitsyn while in his exile in the West.

In the West, he liked the Swiss model of local government and spoke highly of his experiences living in Vermont. Before leaving for Russia in 1994, Solzhenitsyn spoke to his neighbors in a Cavendish town meeting and thanked the town for its hospitality and for respecting his privacy. He thought of the town-meeting type of self-government as the most suitable for Russia. He did not, however, make a god of democracy; he admired great Russian reformer Pyotr Stolypin with his strong promarket and antisocialist stand as the prime minister of the Russian Empire (1906-1911).

Solzhenitsyn believed in the individual rather than the group, party, or state. He wrote in The Gulag Archipelago, "that the line separating good and evil passes not through states, nor between classes, nor between political parties either — but through all human hearts."

Solzhenitsyn had enough courage to equate socialism and Nazism as equally evil and morally reprehensible. He condemned both Nazi and Soviet atrocities during the Second World War and he accused his fellow countrymen of masterminding their own shipwreck.

His writings earned him over 20 years of prison, exile, and world-wide renown, making him the most prominent dissident of the Soviet era and a symbol of intellectual resistance to communist rule. But he is also one of the most maligned and defamed writers of the 20th century. He has been the victim of character assassination and willful distortions from almost every quarter.

He published his final original work in June 2001 with "200 Years Together: 1775-1995," about the history of Jews in Russia. Solzhenitsyn spent his last years in failing health and seclusion at his rural home in Troitse-Lykovo near Moscow, editing his 30-volume collected works. He predicted that he would not be able to complete the work, which will "continue after my death."