The Evolution of an Anti-Anti-Communist 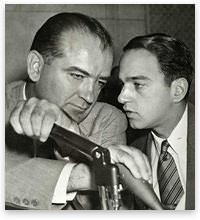 Tags War and Foreign PolicyOther Schools of ThoughtPhilosophy and Methodology

[An MP3 audio file of this article, read by Dr. Floy Lilley, is available for download, or you can listen to it within this page.]

In his "Confessions of a Right-Wing Liberal" (1968), Murray Rothbard wrote,

Twenty years ago I was an extreme right-wing Republican, a young and lone "Neanderthal" (as the liberals used to call us) who believed, as one friend pungently put it, that "Senator Taft had sold out to the socialists." Today, I am most likely to be called an extreme leftist, since I favor immediate withdrawal from Vietnam, denounce US imperialism, advocate Black Power and have just joined the new Peace and Freedom Party. And yet my basic political views have not changed by a single iota in these two decades!

While his claim of ideological steadfastness on his "basic political views" may have been correct, Rothbard did change his mind on questions of strategy and alliance, most significantly on the question of "McCarthyism" and the broader anti-Communist movement of the American Right, which he eventually rejected in favor of a more nuanced (and largely misunderstood) anti-anti-Communism.

What is anti-anti-Communism? In 1984, anthropologist Clifford Geertz wrote an article called "Anti Anti-Relativism." He explained his newly coined term in this way:

My through-the-looking-glass title is intended to suggest such an effort to counter a view rather than to defend the view it claims to be counter to. The analogy I had in mind in choosing it … is what, at the height of the cold war days (you remember them) was called "anti anti-communism." Those of us who strenuously opposed the obsession, as we saw it, with the Red Menace were thus denominated by those who, as they saw it, regarded the Menace as the primary fact of contemporary political life, with the insinuation — wildly incorrect in the vast majority of cases — that, by the law of the double negative, we had some secret affection for the Soviet Union.1

The "postanalytic" philosopher Richard Rorty countered Geertz's anti-anti-relativism with his own "anti-anti-ethnocentrism," describing the context of these dueling double negatives as "postmodern bourgeois liberalism."2 But however much the "anti-anti-" prefix may suggest indulgent pomo wordplay, anti-anti-Communist is an appropriate label to apply to someone like Murray Rothbard, who went from ardently anti to courageously anti-anti without ever supporting or sympathizing with Communism itself — contrary to the absurd accusations from his former fellows at the National Review.

He describes this transition in his book The Betrayal of the American Right. In chapter 12, "National Review and the Triumph of the New Right," Rothbard writes,

It was, in fact, McCarthy and "McCarthyism" that provided the main catalyst for transforming the mass base of the right wing from isolationism and quasi-libertarianism to simple anti-Communism.…

Not seeing this transformation process at work at the time, I myself was a McCarthy enthusiast. There were two basic reasons. One was that while McCarthy was employing the weapon of a governmental committee, the great bulk of his victims were not private citizens but government officials: bureaucrats and Army officers. Most of McCarthy's red-baiting was therefore "voluntary" rather than "compulsory," since the persons being attacked were, as government officials, fair game from the libertarian point of view. Besides, day in and day out, such Establishment organs as the New York Times kept telling us that McCarthy was "tearing down the morale of the executive branch"; what more could a libertarian hope for? And "tearing down the morale of the Army" to boot! What balm for an antimilitarist! …

Since I failed to understand the interplay of domestic and foreign red-baiting that was at work in the McCarthy movement, I was bewildered when McCarthy, after his outrageous censure by the Senate in late 1954, turned to whooping it up for war on behalf of Chiang Kai-shek in Asia. Why this turnabout? It was clear that the New Right forces behind McCarthy were now convinced that domestic red-baiting, angering as it did the center-right establishment, had become counterproductive, and that from now on the full stress must be on pushing for war against Communism abroad. …

At any rate, in retrospect, it is clear that libertarians and Old Rightists, including myself, had made a great mistake in endorsing domestic red-baiting, a red-baiting that proved to be the major entering wedge for the complete transformation of the original right wing. We should have listened more carefully to Frank Chodorov, and to his splendidly libertarian stand on domestic red-baiting: "How to get rid of the communists in the government? Easy. Just abolish the jobs."

That was from an early 1970s narrative of how Rothbard's thinking evolved during the 1950s. In that account, the critical issue is the reversal of foreign policy from Old Right "isolationism" (nonintervention abroad) to New Right internationalism (global crusade). But there's another problem with anti-Communism as a movement, which is how it diverts domestic policy away from individual liberty toward the police-state paternalism for which "conservatism" has become synonymous.

Rothbard makes this point beautifully in an unpublished report he wrote in 1961 for the Volker Fund on an American history textbook, which he criticized for its "almost complete absence of intellectual history, of the people and the ideas that have been important in America":

It is typical, for example, of the intellectual paucity of this work that, while Communism is held up to be a diabolic enemy, it is never even passably defined; the reader only knows that the Communists are a band of people who took over Russia in 1917 and who want to "conquer the world."

As a result, the reader never learns that Communism is simply one consistent wing of socialism ([the author] persistently refers to Communists and socialists only as "political extremists" — a peculiarly uninformative term), and therefore there is no link between Communists and previous Marxian and other socialists, much less any realization that socialism, in turn, is simply an extreme wing of statism. If [he] had begun to point these things out, as any competent historian should, then the reader might get the idea that the reason why Communism may be considered an enemy is precisely that it represents socialism, or extreme statism — but this would mean a recasting of the reader's mind into examining ideologies, and domestic ideologies at that, rather than launch yet another crusade against yet another band of foreign devils, who obscurely want to "conquer" people.

There you have it: Communism is extreme socialism; socialism is extreme statism. No postwar "New Right" conservative can afford to have the general focus of the discussion shift to intellectual history or an understanding of underlying ideologies, lest his own pet policy fall under the same spotlight.

Of course the young Rothbard was anti-Communist. What could be more clearly libertarian than the rejection of universal slavery? But when we let immediate issues stand in for the timeless and universal principle of individual liberty (I will leave the naming of current examples as an exercise for the reader), we risk unknowingly promoting policies of coercion in the name of freedom.