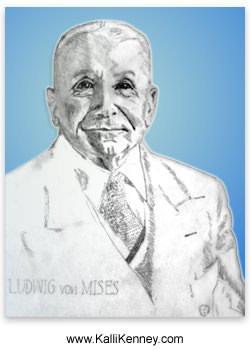 Those of us who were privileged to know Ludwig von Mises have lost a dear friend who meant much in our lives and deeply influenced the direction of our thought and our efforts. But the loss of Ludwig von Mises is a loss to the whole civilized world. He was the greatest economist of his generation. He was more than that. He was one of the social thinkers of our age.

His was a powerful and original mind comparable to such minds as that of Ricardo and of his own teacher, Böhm-Bawerk. He saw economics not as some narrow specialty but as a study of no less than the whole realm of human action, human choice, human decision. And because he saw it so broadly he rightly felt that those who had not studied economics were incapable of wise political decisions, because nearly all such decisions, in this day of statism, have an economic aspect.

He was a phenomenal worker. In conferring its Distinguished Fellow Award on him in the American Economic Association credited Mises as the author of 19 volumes if one counts only first editions. But when we consider all the later editions that he so painstakingly revised and rewrote himself, his works must have come to at least twice that number. Translations of them were legion. In addition, he wrote hundreds of articles and gave countless lectures, and not one was a mere repetition.

Of his many volumes, at least three were undoubted masterpieces. They were the Theory of Money and Credit, which first appeared in German in 1912, his Socialism, also first in German in 1922, and Human Action in 1949, which grew out of a German version that appeared in 1940.

This is not the place, or the occasion, to attempt to state in any detail precisely what were the almost innumerable contributions that he made to economic and sociological thought. They range from his rethinking of the very foundations of the science, what he himself called epistemological questions, to the new light he threw on every particular doctrine he discussed.

But the catalogue of his contributions has already been recited by his many disciples and admirers in two Festschriften devoted to him, the first in 1956 and the second in two volumes, with 66 contributors, in 1971 on the occasion of his 90th birthday.

Among so many admirable tributes I hope it will not seem invidious to mention one in particular, the pamphlet that was just published this year, the Essential von Mises by Murray Rothbard, which explains with beautiful lucidity what Mises contributed intellectually and pays such discerning tribute to the man.

In only one respect will I violate my resolve not to speak here of Mises's doctrines. And this is to refer to his famous contention that the cardinal weakness of the socialist system, apart from its necessary reliance on central dictatorship and coercion, is that it cannot solve what he called "the problem of economic calculation." This problem is solved in a free capitalistic society by free markets, free individual choice, free competition, free money prices, costs, and profits.

But a socialist system would not know how to allocate its resources of land, of capital, and of human labor to meet, with the least inefficiency and waste, the wants of consumers. It would not know what goods and services it ought to be producing, in what relative amounts, or even by what technical methods. The inability of a socialist system to calculate would not be the result of any lack of good intentions or public spirit on the part of the socialist managers. As Mises put it, "Even angels, if they were endowed only with human reason, could not form a socialistic community."

It was this powerful challenge, forcing socialists to face their central problem, that once caused a Marxist economist, Oskar Lange who later became a member of the Polish Politburo, to declare in admiration that "in front of every socialist Ministry of Planning there should be a statue of Ludwig von Mises."

It was one of the ironies of Mises's life, in fact, that his outright ideological enemies sensed his real stature more than most of what we may call the American academic establishment. When he arrived here in 1940, already 59 years old, the American universities did not stumble over each other to offer him a post. If you mentioned his name to someone in an influential position to employ or appoint him, you were told that Mises was a remarkable thinker, no doubt, but too "reactionary," too "extreme," above all, too rigid, inflexible and "uncompromising."

Yet I never heard a word of personal bitterness or resentment from his lips. When he came here he was in serious financial difficulties, but I never learned of this from his own lips either. It was not until 1946 that he became, with the help of friends, a visiting professor at the Graduate School of New York University. And I'd like to say here that the person who is more responsible than any other for seeing that he was kept in that post until 1969 was Larry Fertig.

It is a consolation, however, to be able to announce that at least one college, Hillsdale in Michigan, is setting up a chair of economics in Mises's honor. And there are good reasons to think that at least one other college will later do so.

It is hard to separate Mises the man from Mises the thinker. I have never known a man who was so completely dedicated to his work, so totally immersed in it. He lived for his work, for his thinking, for his ideals. In his youth, he was fond of mountain climbing, of skiing, occasionally of tennis. And throughout all his life he was an enthusiastic walker. Yet these relaxations were always subordinated to his central task. You could hardly call them distractions. They kept him physically and mentally fit for his thinking and writing. This concentration was in also evident in his conversation. That conversation was marked by the relentlessness of his logic, by his many flashes of wit, and by the immense range of his knowledge, particularly of history. But he was impatient with small talk.

His outstanding moral quality was moral courage, the ability to stand alone, and an almost fanatical intellectual honesty and candor that refused to deviate or compromise an inch. This often cost him personally dear, but it set an ideal to strengthen and inspire his students and all the rest of us who were privileged to know him.

Ludwig von Mises was, in a sense, a formidable man. But I don't mean to imply by anything that I have said that he was deficient in kindness, in sympathy, affection, or love. He felt very deeply, and he was intensely loyal, as his closest friends had reason to know. But he tried to suppress any display of feeling that might be regarded as extravagant.

Thanks at least in part to the constant care that his wife Margit took of his health and comfort and in protecting him from unwanted intrusions, he lived for 92 incredibly productive years. Lu always knew how much he owed to her. To cite one example out of so many, in the foreword of the third edition of his Human Action, after thanking a handful of us for helpful suggestions, he added, "But most of all I want to thank my wife for her steady encouragement and help."

In a real sense, Ludwig von Mises still lives. He lives in his books, which will be read for centuries. And more immediately he lives in the affection and love and in the minds and thoughts of his students, many of whom have themselves become famous. Among his most brilliant students in Europe were Gottfried von Haberler, Friedrich Hayek, Fritz Machlup, Oskar Morgenstern, Karl Popper, and Wilhelm Roepke. Among the younger group in America have been Percy Greaves, Israel Kirzner, George Reisman, Murray Rothbard, Hans Sennholz, Louis Spadaro. In mentioning these, most of whom are present today, I hope I have not done an injustice to some I may have inadvertently left out.

Perhaps most of all, Ludwig von Mises was the most powerful spokesman of our time for the purification of capitalism and the preservation of economic freedom. Because it illustrates the depth of his feeling and the uncanny foresight with which he judged the course of events more than 40 years ago, I cannot forebear from quoting a passage from the last page of his book on Socialism:

Everyone carries a part of society on his shoulders; no one is relieved of his share of responsibility by others. And no one can find a safe way out for himself if society is sweeping towards destruction. Therefore everyone, in his own interests, must thrust himself vigorously into the intellectual battle. None can stand aside with unconcern; the interests of everyone hang on the result. Whether he chooses or not, every man is drawn into the great historical struggle, the decisive battle into which our epoch has plunged us.