The Economics of Slushy Drinks 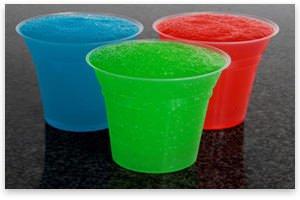 "That's quite a markup," remarked my father as he paid for my six-year-old son's treat after a soccer game. "Three dollars for a cup of ice."

It's true; the price tag did seem steep at first. But as we analyzed the situation more carefully — my father is also a fan of free markets — we realized that there was no reason to be outraged at the vendor's price.

Before speculating on the ins and outs of the frozen-drink market, let me give the background. My son plays soccer for a town league. Every Saturday, the teams all play each other at one central location, with at least 20 little fields set up for the various age brackets. During the course of the day, I'd guess that at least a thousand people (counting spectators) cycle through the fields.

During Easter weekend my parents were visiting, and we all went to my son's game. My son pointed out with enthusiasm a truck that was parked in a very accessible area, because it housed ice drinks. (I think technically they were not the ICEE brand, but it was the same idea.)

After my son's team absolutely blew out their opponents, I suggested to my son that if he asked nicely, Grandpa would probably buy him a treat at the truck. And now I have brought all readers up to speed from where our story first began. …

How Could Somebody Charge $3 for a Cup of Ice?

As a card-carrying armchair economist, I did not conduct any actual research for this article. Nevertheless, it may interest some readers to learn how to think like an economist on such everyday puzzles.

Factors on the Demand Side

The first important point is that my father voluntarily paid the $3 for the refreshment, albeit with some significant social pressure leaning on him after the promise made to my son. But if, for example, he had gotten to the truck and the sign said each frozen drink cost $30, my father clearly would have walked away. We could've told my son that it was too much money, and that we'd stop at a convenience store instead.

We already have more insight into the "high" price of the drinks — their extremely convenient location. An ice-cold-drink-at-the-store is not the same good as an ice-cold-drink-next-to-the-soccer-field. There is nothing irrational or "uneconomical" about consumers being willing to pay more for the immediate quenching of their thirst.

Although I obviously didn't think it through at the time, I realized in retrospect that when I suggested to my son that my dad would buy him the treat, I knew that the price had to be "reasonable," because the truck had obviously been at the games before (since my son recognized it), and because I could see a crowd of people in front of it.

These considerations shed some light on the "demand side" of the equation. Especially because it was a hot day, it's no mystery that so many people were willing to exchange $3 for a "cup of ice."

Factors on the Supply Side

Now let's look at the supply side. In general, if we're trying to understand why a price might be high, it's not enough in economics to explain that people really value something. We need to go further, and explain why the quantity supplied stays low enough so that what's called the "marginal utility" of the small number of units remains high.

Let me clarify with a different example. If someone were selling bottles of water at $100 a piece, we could explain that by saying that the consumers valued each bottle more than the other goods and services that could have been obtained with the $100. However, because that price is so unusually high, we would want to explore the situation more in order to figure out why more bottles weren't being channeled to these particular consumers, who were obviously on the verge of dying of thirst.

By the same token, we can speculate on the "supply side" of our frozen drink supplier, to see if the apparently high price of $3 really isn't so surprising after all.

One obvious observation is that it was a hot day, and so refrigerating the ice in a relatively small container (i.e. that could fit in a truck) might be expensive, especially because it has to sit in the hot sun for at least several hours. The vendor also had to buy the sugar flavoring (available in several colors) that the kids would squirt into their "cup of ice." Who knows how much those cost to restock, but the vendor would also have to worry about some kids dribbling large amounts onto the ground before their parents intervened.

Another obvious expense in the operation was the truck itself. This wasn't some guy's F-150 with a cooler thrown in the back; the whole truck had been configured to sell frozen treats. (For example, one side of the truck was painted full of descriptions of the available items.) Now, perhaps the owner used the vehicle for his personal transportation needs, but it's possible that the truck was dedicated entirely to his business. In that case, the $3 per sale would need to cover not just the ice, cup, and flavoring, but also a tiny portion of the truck payment and upkeep, including gas.

Another major cost was the vendor's time. I love watching my son play, but I know I'm ready to get the heck out of Dodge when the game ends. In order to make it worthwhile to stand at that field for several hours, the vendor would have to charge a high enough "markup" to pay himself a decent hourly wage.

Yet another consideration is the risk involved. If there are thunderstorms (or even if the field is too muddy from previous rains), all the games would be cancelled on a particular Saturday. (I think they make them up — if at all — with double-headers in subsequent weeks, rather than extending the season.) So when deciding on his pricing strategy, the frozen-drink vendor would need to consider that he might miss out on a large fraction of potential sales due to weather. If the weather is particularly cold, then it might not make sense to drive the truck to the field even if the games are on.

Finally, we have to consider that the coveted location is itself valuable. The truck's owner obviously had to get permission from the league to be able to park right in the middle of all the fields, so that the majority of parents and kids would pass near it on their way home. This is what gives the truck vendor such an advantage over his competitors in nearby convenience stores and restaurants, and the soccer league might charge him a fee for this privilege (unless he's friends with the people running it).

Depending on the fee that might be charged for use of the location, the entire problem might get pushed back a step. Rather than asking, "How can this vendor get away with skimming so much off the parents?" we instead would want to know, "How can the soccer league get away with earning so much from providing concessions during the games?"

The answer to this second question would follow similar lines. We would first realize that nobody was forced to join the league, and that if the organizers really were making a killing, then competing soccer leagues (charging lower registration fees and/or providing concessions at lower prices) would spring up.

The point of this article wasn't to say whether $3 for an iced drink was "too high" or "just right," according to some particular theory of justice. Rather, as dispassionate economists, we can analyze why consumers were willing to pay so much for each unit of a good, and why producers didn't rush in to sell more units at a lower price. Such an exercise is useful in understanding how the world works, and it also promotes social harmony when we see things from another's perspective. And believe me, social harmony is valuable indeed after a bunch of parents have watched their 6-year-olds play soccer.