Economic Thought through the Ages 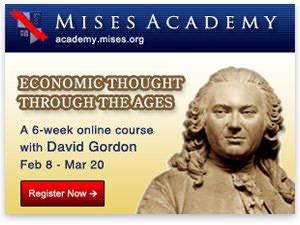 [David Gordon will teach Economic Thought Through the Ages, a 6-week online course, February 8 – March 20, at the Mises Academy.]

An Austrian Perspective on the History of Economic Thought, the capstone of Murray Rothbard's career, is one of the greatest works of intellectual history written in the 20th century. It is a massive book, over 1,000 pages of small print, and students often find it hard to read. This course, the first of a two-part series, will cover the first volume. Students who take it will gain a thorough knowledge of some of the key themes of the book.

People with three different interests will find this course of value. First, if you want to learn Austrian economics, it is essential to grasp how this system grew out of previous economic thought. Austrian economics developed the insights of the Spanish Scholastics, in particular the subjective theory of value, and reacted against the classical economics of Adam Smith and his followers. Rothbard's book is an unrivalled source of insight on these vital topics.

Second, if you are interested in the thought of Murray Rothbard, you need to read An Austrian Perspective. It contains his views on many topics either not otherwise available or not discussed elsewhere in so much detail. These include the key mistake in Aristotle's economics, why Adam Smith is overrated, the place of religion in economic development, and the importance of Cantillon and Turgot.

Third, if you are interested in history, you will find in Rothbard's book a treasure trove of insights. How did the idea of natural law develop? What role did Catholics and Protestants play in the development of capitalism: is the Weber thesis correct? Was Machiavelli a teacher of evil? How did the modern state arise? What was the basis of mercantilism?

The course consists of six weekly lectures beginning February 6. Each lecture will last about one hour, followed by a half-hour for questions and discussion. Weekly quizzes will be offered for those who wish to take the course for credit.

Here is a tentative schedule for the course: