Economic Isolationism in The Walking Dead 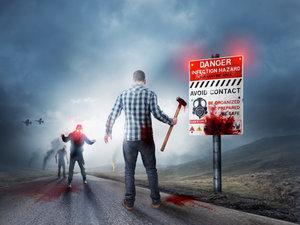 In an infamous scene from season 3 of zombie apocalypse show The Walking Dead, the protagonists, who have left their fortified base for the sake of supplies, are pictured driving down a road bordered densely by trees. A lone hitchhiker soon appears on the desolate stretch. Upon seeing their approaching car, he gesticulates wildly and yells, “Slow down! I'm begging you.” But unblinkingly they cruise past, and the hitchhiker falls in despair to his knees. On their way back only hours later, a red smudge on the asphalt is all that remains.

In The Walking Dead, the survivors have splintered into exclusive, tribal communities. Within these groups, individuals labor for each other; but in their encounters with outsiders, they are mercilessly standoffish, as illustrated by the hitchhiker scene. Rothbardian insights into violence, as well as the law of time preference in the context of a cruel, zombie-infested world, explain (what we will term) economic isolationism in The Walking Dead.

Murray Rothbard, in Man, Economy, and State, systematically explains the deterrents that can serve to dissuade an individual from violence in a stateless society.1 These deterrents include moral compunctions, consideration for the risks of defeat, and, most importantly for our purposes, the long-run losses incurred by violent action. These long-run losses refer to the future goods and services that a companionship with the victim could have provided, had he not been killed or otherwise rendered disagreeable to the prospect of trade. Notably, as the long-run losses incurred by violence consist of future goods and services, they are subject to a diminution in value by increases in individual time preference.

In a world overrun by murderous zombies, one’s existence is defined by incredible uncertainty. Thus, the notion of a distant future is regarded with understandable scepticism, to the detriment of the value of goods promised therein; i.e., time preferences are high. As a result, regard for the gains from trade is impacted, for they are a long but trickling stream. This diminution in the value of future goods, at the same time, elevates the relative value of war-gotten plunder: expropriated property is available in a lump sum for immediate consumption. And so, in a high-time-preference environment, a bias is created that undermines the prospects of peaceful cooperation, the benefits from which, though usually larger in sum, suffer from their tendency to be drawn out temporally.

We may say that, ceteris paribus, as time preferences rise in a society, the incidence of violent action will increase. This is not to suggest that moral and upright people could be corrupted, or that the weak and cautious could be emboldened, by an impatience for consumption alone. Rather, high time preferences have their effect on those marginal actors, who were previously kept non-violent by the feeblest of restraints. Imagine “violence” as a writhing beast, imprisoned by the collective grip of numerous shackles. These “shackles” are representative of the multiple (previously outlined) deterrents, of which our analysis has focused on just one — namely, the long-run losses incurred by violent action. Imagine further that, at times, some of these shackles are momentarily weakened or removed: desperate circumstances may temporarily subordinate moral qualms, or victory may seem so certain as to eradicate any concerns regarding defeat. In these marginal cases, the effect of an increase in time preference is to undo the last restraint, squashing the value placed on forgone, future trade, and unleashing the beast in the process. With the causal link between violence and time preference elucidated, it is a simple enough task to explain economic isolationism in The Walking Dead.

When time preferences are high, the collateral that an individual holds over his fellows is reduced: he may no longer rely on the threat of future non-cooperation as a deterrent against would-be aggressors. In such an environment, the value of his companionship is largely derived from its present usefulness. This leaves him at considerable risk of ill-treatment should he ever succumb to temporary injury or sickness, or should he find himself in any other imaginable scenario in which his companions might consider his exploitation to be of immediate profitability. In such an environment, an individual will, through experience, come to anticipate an increased likelihood of violence by his associates.

Decision-making processes are directly impacted by this perceived risk of violence. In evaluating the net benefits provided by an additional companion in one’s circle, a risk discount is now applied, subtracting from the gains from trade. This discount was the cause of the hitchhiker's demise: the benefits his labor could have provided were judged insufficient to overcome the risks he, as a self-interested actor in a high-time-preference environment, posed to life and property. And so he was condemned to die by the wayside.

At this point, an objection may arise: why, if this risk discount is so potent, hasn’t it produced a state of “perfect isolationism,” i.e., a society of totally secluded individuals? Why have the characters aggregated their survival efforts at all, forming groups? The reason is simple: the marginal benefits of those initial associations are enormous, and they can therefore withstand the weight of the risk discount — a completely isolated individual in any place, regardless of his proximity to zombies, would be utterly poverty stricken.

As the group expands, however, and more specialization of labor is enabled, newcomers are tasked with the role of providing for increasingly marginal wants, the achievement of which, though desirable, will at a point no longer outweigh the conflicting urge to minimize risk. Thus, the entry of refugees into the compound will stop at that point where the marginal benefit of the next individual’s net contribution is no longer large enough to justify the associated risk. As stated above, the hitchhiker’s exclusion resulted from his appearing to the characters after this “overflow point”: the benefits he offered were too marginal to justify the risks. To appreciate this, imagine him appearing instead at a time before the establishment of their group, when they were still vagabonds. In this deprived state, the characters would have regarded his companionship a great boon, and would therefore have been unlikely to leave him as fodder for the zombies.

The benefits of association diminish at the margin, while the risks, which are at least in part the product of a high-time-preference environment, do not. Therefore, a point is inevitably reached at which further integration with outsiders is deemed unprofitable. The isolationism displayed by the protagonists’ group is indicative of said point’s arrival. United as common benefactors in an exclusive system of specialization and trade, they form an alliance of “us” (on the inside), distinct from “them” (on the outside).