The Economic Delusions of the Political Class 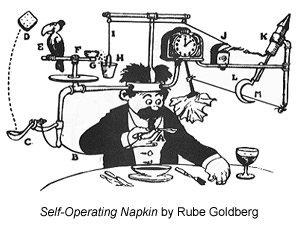 The New York Times recently ran an "analysis" article entitled, "Debt Problem's Sure Cure: Economic Growth." This is something that falls into the category of "Gee, why didn't I think of that?" All you need is growth, so let's go get us some growth! That will take care of everything!

There is, in theory, a happy solution to our debt troubles. It's called economic growth. No need to raise taxes or cut programs. Just get the economy growing the way it used to.

At one level, she is correct. Assume, for a second, that sanity were to prevail in Washington and Obama were to make an admission that his "green-energy" projects are a vast waste of resources. One could imagine a speech like this: "My fellow Americans, it is time we gave up the charade that we can replace, by force, our current energy systems with ethanol, windmill farms, and solar power. I am going to ask Congress to get rid of the energy mandates and unsustainable goals for producing 'green fuels,' and I will also review many of the EPA's regulations. I have come to realize that we cannot subsidize and mandate a depressed economy into recovery, and that our 'green initiatives' have only made things worse. We already have a dynamic energy industry, and we have to stop destroying one of the few semihealthy sectors of our economy."

One can imagine that a number of things would follow:

The outcry among the greens and their political, academic, and media allies would be shrill; cries of anguish would run from one coast to another. Second, assuming he and Congress actually carried out these directives, another cry of anguish would come from people tied to the production and sales involving the "green-energy" apparatus.

There is no doubt that whole ethanol and electric-windmill plants would stand idle, and the countryside would be dotted with now-useless windmills. Lots of people tied to this whole infrastructure would lose their jobs, and there would be a spate of media stories about the personal troubles tied to their unemployment.

Like the ignorant bystanders in Bastiat's broken-window fallacy, many commentators simply are unwilling and intellectually unable to comprehend that their employment and production schemes are based on the fallacy of composition, in which it is assumed that what might be good for a select few always is good for the masses, and what is harmful to that select few also is harmful to society overall.

It's fine to endorse "economic growth," but we also need to know how economies actually grow in the first place. Unfortunately, the very things that this economy needs to grow involve repealing programs and laws that government and its interests like.

The idea of allowing entrepreneurs to move resources from lower-valued to higher-valued uses (as ultimately determined by consumers and discovered by entrepreneurs in a free market) is considered to be so repugnant that it is imperative that government impose an alternative "solution." So, instead of real entrepreneurship, we are left with windmill farms, ethanol, and a whole host of unsustainable schemes that so distort the economy that huge numbers of people are made worse off.

Why is real, free-market growth so hated by the political classes? There are three main reasons, the first of which is the reluctance of people to accept that consumer choice really should be what directs resources. For example, consumers by their selections have demonstrated that they prefer gasoline-powered automobiles and electricity that comes mostly from coal-fired electric generators.

"The political classes may be a lot of things, and they believe themselves to be many things, but one thing they will not accept under any circumstances is being irrelevant."

It is not that consumers don't want other forms of transportation that might use less fuel, or that they hate windmills (although a lot of people living near windmills really do hate them). Instead, given the opportunity costs of fuels and transportation, as well as the way that these particular entities perform, consumers are showing their preferences for better, cheaper fuels.

Such thinking is anathema to the political classes, and so people associated with them hold that consumers need to be forced by state powers to make other choices. In a recent speech in Iowa to the Renewable Fuels Association, Republican presidential hopeful Newt Gingrich, the former speaker of the House, not only gave his undying support to corn-based ethanol, but also said that the US government needs to mandate that consumers purchase "flex-fuel" cars. To put it another way, if consumers will not spend their money the way that a political insider like Gingrich would like, then the consumers need to be forced to do what Gingrich and his allies want.

Another reason is that the political classes refuse to see profits (and losses) in a free-market system as being a good thing. Instead, we hear constantly that profits are an unjust extraction of wealth from "the people," while losses are tragic and should not be permitted. When one explains that profits reflect the free movement of resources from lower-valued uses to higher-valued uses, such an explanation is ignored.

Third, and perhaps most important, a successful free-market system can operate without any help at all from the political classes. In fact, it works better when politically connected people are not involved in the economy at all, or at least as policy makers. The political classes may be a lot of things, and they believe themselves to be many things, but one thing they will not accept under any circumstances is being irrelevant.

Yes, economic growth would be a good thing for the US economy and other economies. However, because such growth can occur only within the bounds of a free-market system, the political classes will do everything they can to make an end run around markets and impose something that would make Rube Goldberg proud. In the end, they force the economy into depression and then place the blame on everyone but themselves.