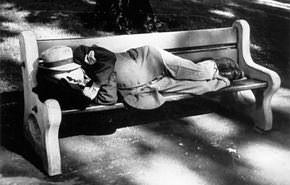 Tags Booms and BustsMedia and Culture

A conspicuous cultural change we can look forward to is a dramatic change in men's dress style. Guys, you might as well get ahead of the curve. The free-fall economy means a boon for better fashion for men who intend to survive the onslaught.

We will be highly fortunate if the second Great Depression turns out to be as stylish as the first, in which even the bums sleeping in the park benches looked better than the average workers and even CEOs today.

Just look at this guy in this Depression-era photo. See the 1 ¾ inch cuffs on his trousers, the snappy crease in his pants, the great hat, and the woolen trousers? And the shoes: leather and laces resting on a solid foundation. If I found any of his clothes in the vintage shop, I would snap them up and be ready for today's tight job market, which seeks serious men, not goofs in sweats and polos.

The boom times led to great shabbiness. Workers have lived in wrinkles and jeans. The guy with the shirt with buttons is derided by others — "You going to a wedding or something?" We were all encouraged to look up to the slobwear of hotshot traders and stock jobbers and the others, who revel in the fact that they look like heck all of the time. Even the billionaires have looked like hobos (who themselves looked pretty great in the 1930s).

The idea behind shabby vogue was to give the impression that you don't really care what others think. You are the cutting edge, the smasher of idols and conventions, a person who doesn't give a flip about how society judges such artificial external superficialities as pant creases and ties and things. Your value is in your very person, the fact of your existence on this planet. In the boom times, the message of fashion is "It's all about me!"

Now all of this has come into question. How much value did this jeans-clad generation really add? How much of it evaporated? How much was illusion all along? Maybe all this hype about intellectual capital is poppycock, and what matters is what one actually does, and not only for oneself but for others, such as customers and bosses and fellow workers.

As Trevor Kaufman, the guru of "CEO Casual," told the Wall Street Journal in an article written at the top of the boom, "A suit has become something you wear when you're asking for money."

In the bust, your clothes need to send a different message. There are fewer resources to spare. Everyone is conserving. The goal of your life becomes different. You are no longer permitted to pretend that your very existence is a blessing to the world. Instead, you must add more value to the world than you take from it. This is especially true in your work life.

In fact, this should be your professional motto: I can add more value to this firm than I take from it.

Right now, with unemployment moving into the double digits, it is becoming a dog-eat-dog world in labor markets. You must stand out. You must find ways to show that you are not expendable, that tossing you out would do more harm to the company than good. You must show that the company will risk losing more revenue by sending you away than by keeping you.

Clothing reflects this. There is no sense in disadvantaging yourself in this struggle.

Just have a look at what all men in the Great Depression wore. They were smashing. The suit. The hat. The shoes. The ties. Everything was well put together, among all races and classes of men. This isn't just because all this stuff was intrinsic to the culture. Men in all times and all places have had the option of looking ridiculously unkempt. The point is that these men were under pressure to perform, to show that they were valuable, to demonstrate on sight that they were desirable commodities as workers.

So let us plunge back in time to examine modern needs in light of historical precedent, with some tutorial along the way.

Let's start with the suit. It should be made of wool. It should be gray or blue. It should not have that strange Euro fit but rather have the loose-but-neat fit of the traditional American suit, which was never designed to show off your body, but rather your character.

Thus must it be sturdy and serious. The jacket can have two buttons, three buttons, or four buttons. When you are standing, all but the bottom button should be buttoned. You need to work on the habit of unbuttoning these buttons when you sit down and rebuttoning them when you stand up. Yes, you have to do this each time. Try it consciously over the course of a day and it becomes habit. The only exception might be at dinner, during which it is permissible to keep the coat buttoned.

Just so that we are clear, the sport coat and pants combination is not a suit. In other words, a blazer and khakis don't work. A suit has a jacket and pants and sometimes a vest that match. The fabric and color of the top and the bottom are the same.

You can buy great suits in thrift stores or on e-Bay, but you have to have a sense of what you are doing. If you don't, you have to pay more by going to a nice men's store, where you will have to pay the big bucks. However, you can get by on two or three suits, essentially forever. Wear one on M-W-F and the other on T-Th-S.

Shirts, always worn with an undershirt during the bust (because people who really work also really sweat), should be white, blue, or light tan. Everything else is a risk. It can be straight collar or button-down. Lose the fancy "collar bars" and things until you are CEO. They look pompous most of the time.

For fit, the pants length should grace the top of the shoe, and the cuffs should be more than 1 ¼ inches but less than 2 inches. The shirtsleeves should fall ¼ to ½ an inch below the jacket.

Now consider the shoes. They should lace up. They should have leather soles if possible. Loafers are for loafers, and you don't want anyone to think you are among them.

And hats! This might be the most exciting of the restorations of our time. Men haven't really worn them since the 1960s, and that's not just because JFK didn't wear his. It's really because we don't get out much anymore. We go from the house to the car to the office and hats don't serve that much function anymore.

And I hate that I even have to say this, but hats are not to be worn indoors. The only exceptions are large public spaces: malls, train stations, airports, and hotel lobbies. Otherwise, they are always off: restaurants, homes, offices, elevators, etc.

However, the hat serves more than a pure utility function. It is a thing of beauty. It is as valuable, in this sense, in the hand as it is on the head. A hat changes everything about a man. It elicits notice and respect, and the man with a hat knows this: he is complimented on it constantly. And let's just tell the truth here: it raises you above the rabble quicker than any article of clothing.

There are two general colors of hats: browns and blacks. You choose your hat the same way you would choose your socks, by picking up on general hues and themes. They are made of wool and sometimes pelts (fancy stuff). They can be stiff or crushable. You know the style that is right for you by trying it on. Different head shapes require different styles, so I'm not sure that online shopping can really work here.

In any case, despite our indoor culture, the new Great Depression stands a good chance of finally smashing the legacy of JFK: the hat might be restored.

Please note one final point: dressing up doesn't mean adopting a stuffy personality with a stiff way about you, or walking around like a tin man. Good clothes provide the freedom to express yourself in other ways. You can be casual-acting and normal-behaving, and it is all the more important to be this way when you are dressed up. You can still move about normally, and do all the things you would otherwise normally do.

Clothes on a man should look and seem comfortable no matter what they are. You must be confident enough to wear them as if you belong in them. The more you can look like your clothes are in fact no big deal, just part of your life, the more compelling the message will be.

The way you dress can make all the difference. If it doesn't work to boost your professional life, you can always count on looking fantastic when you march on the White House and protest against its occupants for robbing you blind in the name of saving you.