GET NEWS AND ARTICLES IN YOUR INBOXPrint
A
A
Home | Mises Library | Doomed to Failure: American Conservatism 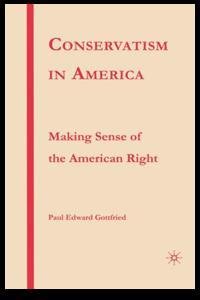 Paul Gottfried's excellent book lends strong support to a controversial claim of Murray Rothbard's. In his The Betrayal of the American Right (Mises Institute, 2007), Rothbard argues that the American Old Right could not be considered conservative in the European sense. Quite the contrary, it opposed traditional conservatism as an enemy of liberty. Rothbard states his view with characteristic force. He refers to "the philosophy that has marked genuinely conservative thought, regardless of label, since the ancient days of Oriental despotism: an all-encompassing reverence for 'Throne-and-Altar,' for whatever divinely sanctioned State apparatus happened to be in existence." (Betrayal, p. 1). The Old Right of Nock, Flynn, Garrett, and others, was a classical liberal movement, not a conservative one.

Though he was a close friend of Rothbard's and often his ally on practical political questions, Gottfried is not a libertarian. This distinguished paleoconservative would not, it is safe to say, share Rothbard's rejection of European conservatism. Nevertheless, his main argument very usefully supplements Rothbard. Gottfried, though himself sympathetic to European conservatism, maintains that a conservatism of this stripe could not, and did not, exist in the United States. If he is correct, then not only was the Old Right not conservative, as Rothbard says; it could not have been.

But why can European-style conservatism not take root in America? Gottfried thinks that conservatism needs a social basis to flourish. Absent a hierarchical class structure, there is no basis for a viable conservatism; and such a structure did not exist in America. Conservative values do not float freely in abstraction from class. Here Gottfried has been greatly influenced by Karl Mannheim. 1 According to Mannheim, "the conservative Denkweise (way of thinking) emerged as a reaction to bourgeois rationalism as European aristocrats and their theoretical apologists reacted against liberal and revolutionary democratic reformers, and their political designs. In opposition to these reformers, conservative critics on the continent upheld the inalienability of aristocratic estates…" (p. 33). Gottfried very usefully points out that Mannheim's famous "free-floating intellectuals" do not constitute an exception to his view that values rest on class. The intellectuals are freely floating in that since the Middle Ages, "they have been moving around looking for classes and groups to which they could attach themselves" (p. 34).

Because the appropriate social classes for European conservatism were not to be found in the United States, the attempt by William Buckley and his National Review cohorts to establish a simulacrum of European conservatism in America was doomed to failure. Gottfried finds a large measure of merit in Louis Hartz's thesis, in his The Liberal Tradition in America, that the sole American tradition has been liberalism, though he does not share Hartz's enthusiasm about it.

According to Hartz, the United States from its inception was marked by two critical factors that would determine its later course as a political society, namely "absence of feudalism and the presence of the liberal idea" … It is possible, and indeed crucial for the present study, to frame an argument similar to Hartz's without replicating his polemics or overgeneralizations. (pp. 6–7)

Lacking the necessary social base, intellectuals in search of an American conservatism were reduced to futile expedients. Russell Kirk in The Conservative Mind offered a list of supposed conservative principles, but his creed was amorphous and, in new editions of the book, changed with the times. Harry Jaffa endeavored to deduce a principled politics from the equality clause of the Declaration of Independence, but his attempt failed. Not all American conservatives endorsed Jaffa's sophisms, but his condemnation of moral relativism won wide assent. Absolute values, it was hoped, would provide the needed basis for an American conservative politics.

In what seems to me the most philosophically interesting section of the book, Gottfried rejects this project. He does so not only because he accepts Mannheim's thesis: if Mannheim is correct, insistence on absolute values will not suffice to create conservatism. He also contends that the attempt to establish absolute values will have disastrous consequences.

Here we must avoid misunderstanding. Gottfried, in his criticism of absolute values, does not claim that all value judgments are subjective. He acknowledges, with Max Scheler and Nicolai Hartmann, that there are objective hierarchies of value:

The value terminology that runs through the discourse of such ethicists as [Eliseo] Vivas, Max Scheler, J.N. Findlay, and the Swedish humanist Claes Ryn refers explicitly to a morally structured universe, one in which ethical judgments have to be made in terms of either a supposedly recognizable order of ascending goods or a single highest good. (p. 99). 2

Rather, what concerns him is this. Often, political figures endeavor to impose their subjective preferences on everyone else. They do so by contending without reason that their values apply universally. The attempt to impose values in this way results in what Carl Schmitt called the "tyranny of values."

According to Schmitt, values work as Angriffspunkte, points of attack by which individuals try to impose their wills on each other … By legislating their value preferences, or by otherwise projecting them outwards, they hope to give these preferences wider scope … Like the Kantian ethicist, the asserter of a value desires universal validation for his belief. His "highest value" can be rendered valid only in proportion to how widely he can apply it by forcing its acceptance. (p.109)

Schmitt blamed such attempts to enforce values for the ideological wars that disfigured the twentieth century. 3

It seems to me that Schmitt and Gottfried are right that often people do attempt to impose their values on others through spurious pretensions to universality. Certainly, the excesses of Wilsonianism and of contemporary neoconservatism count as prime instances in point. But it does not follow from this that no values are binding on everyone. Kant, after all, had arguments for the categorical imperative; he did not simply postulate it as valid. If Schmitt thinks him wrong, he must refute him. To describe what he takes to be the bad consequences of universalism does not suffice.

Schmitt and Gottfried stand innocent, though, of a charge that may have occurred to some readers. If they fear the destructive effects of universalism, are they not attempting to impose a universal value of their own, namely the avoidance of destructive conflicts of value? Have they here enmeshed themselves in contradiction?

I do not think so. They are best read, not as making a value claim, but rather a factual one. This is what happens, they say, if one attempts to universalize values. It is then up to us whether we view this consequence as so bad that it leads us to reject universalism. If we do so view it, we need not claim that our act of rejection itself expresses a value of universal validity.

But have not Schmitt and Gottfried escaped this snare only to fall before another objection? If they say that their rejection of universalism does not itself claim universal validity, have they not embraced value subjectivism? How then can they appeal to the objective value hierarchies of Scheler and Hartmann? Here I think one must distinguish between objectivity and universality. One can consistently hold that certain values are true independently of personal preference while holding at the same time that these values do not impose binding obligations on all, come what may.

If what I have said so far is right, though, am I not left with a problem of my own? I have said that Schmitt and Gottfried have failed to refute the universalist claims of Kant and others like him. But neither have I refuted their claim that universalism leads to destructive conflicts about values. Am I left in the uncomfortable position, then, of asserting that a system of values that leads to destructive conflicts may nevertheless turn out to be true?

My escape lies in the nature of the values claimed to be universally true. What if these values include the claim that one may not initiate force against others? Would not a system that includes this value be able to sustain itself against the charge of a tyranny of values? Of course, I have not conjured this idea out of my imagination. It is precisely the libertarian ethics defended by Murray Rothbard. I hope that Gottfried will in his future work respond in more detail to the claims of libertarian ethics, as well as develop at length his fascinating remarks about ethical theory.

Regardless of whether one can accept without reservation all that Gottfried says about the tyranny of values, no one can reasonably deny Gottfried's claim that American values conservatism has been a failure. As our author abundantly shows, neither National Review conservatives nor neoconservatives have been able to sustain a coherent set of values.

Instead, as leftist views have become ever more dominant in public opinion, these supposed defenders of absolute truth have bowed with the wind. They have themselves moved leftward, in an effort to accommodate themselves to the prevailing consensus.

In an example that much concerns Gottfried, Martin Luther King, Jr. is now portrayed by these people as himself virtually a neoconservative. He is held to have favored a strict policy of nondiscrimination and to have spurned special treatment for blacks. In fact, this radically distorts King's views; and years ago, the National Review conservatives took an entirely different line on him:

In 1983, Human Events and National Review expressed outrage over proposed congressional legislation for a Martin Luther King, Jr. national holiday, alleging King's communist associations, adulterous liaisons, and advocacy of civil disobedience. But within twenty years, the same sources not only played down what until a few years earlier had enflamed their editors, but they were discovering in a once-despised social radical a deeply conservative Christian theologian. (p. 139)

Values conservatism, in this instance as in many others, could not sustain itself.

In his detailed account of the peregrinations of values conservatives, Gottfried indicts not only his customary target, the neoconservatives, but also William Buckley, Jr. As Gottfried shows, Buckley has often played a malign role in purging from conservatism those not in accord with the values he at the time professes. He would not allow Old Rightists such as John T. Flynn access to his magazine to argue against the Cold War statism it was the principal aim of National Review to advance. Buckley continued his nefarious course even as late as 1995, in his shameful obituary of Murray Rothbard. A man of principle who refused to accommodate himself to the current consensus was too much for Buckley to bear.

Conservatism in America manifests the author's immense erudition, in German, French, and Italian sources, as well as in English ones. It is an indispensable work for understanding what passes for American conservatism in our day.