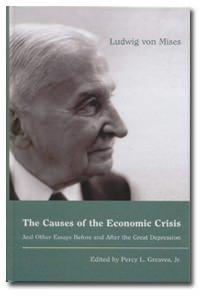 No matter how many warnings have been issued, an economic crisis always takes a country by surprise. The most urgent task is to somehow prevent policymakers from doing evil things to "correct" the crisis. Every form of intervention can only make matters worse. The best policy is to adopt a laissez-faire policy through regulatory cuts, sound money, and eliminating legal restrictions on trade. The liquidation must be allowed to happen on its own to provide a suitable foundation for a future recovery.

How can we help this happen? One way is to make sure that the right books are front and center. We might start by reviewing the great event that still inspires today's most fallacious countercyclical policies: the Great Depression.

It turns out that Ludwig von Mises was the great prophet of the event, with a series of essays on the nature of the business cycle and the urgency of sound money. After the Depression hit, he urged a free-market policy for the world. These wonderful essays are collected in The Causes of the Economic Crisis. It was a tragedy that it took so long for them to appear in English. What they show is that he, not Keynes, was the person who had it all figured out.

When I speak of a laissez-faire policy, many people's first reaction is: that's what Herbert Hoover did! But the truth is quite the opposite. Hoover was actually the first New Dealer. He tried to reflate the economy and attempted ill-fated jobs and spending programs. In fact, FDR's presidential campaign of 1932 argued that Hoover was a big spender who was driving up the debt and making matters worse through his intervention!

Never heard that before? Have a look at Murray Rothbard's America's Great Depression, which remains the best overall account of why the stock market crash happened and what Hoover did to make everything worse. Murray shows that the depression was not a crisis of capitalism but the result of a disastrously loose monetary policy in the 1920s. A special treat of this book is how Rothbard takes you through the theoretical underpinnings of the crisis, and shows precisely how the central bank distorts the structure of production and unbalances the relationship between consumption and investment.

Along the same lines, we need to understand that the Great Depression was hardly the first such crisis. In 1920 there was another, but it was resolved rather quickly because the government stayed out of the way. Moreover, banking panics occurred often in the 19th century, and always because of the same factor: fractional-reserve banking backed by a lender of last resort. Counterfeiting comes to nothing but trouble. Rothbard reviews the whole of this history, complete with an accounting of every crooked banker and every power-mad politician, in A History of Money and Banking in the United States.

How serious do you want to get with your theoretical understanding? Do you find yourself tripped up by inflationists throwing intellectual curveballs? Maybe you should sit down with the great treatise on money and banking in our time: Money, Bank Credit, and Economic Cycles by Jesus Huerta de Soto.

Yes, it is long. Yes, it has apparatus. But the scholarship is wholly necessary for proving his radical thesis that fractional-reserve banking constitutes an intervention in the market economy and is the foundational reason for the business cycle. Through a close examination of microeconomic law and economy, he finds a link to macroeconomic effects. What we do in the micro sphere echoes in the macro sphere.

De Soto goes back to Roman law to show that bank deposits are rightly treated like other forms of property subject to the usual standards of fraud. He demonstrates how this standard was widely accepted until a change in outlook in the high Middle Ages, when special interests prevailed on legal regimes to have deposits treated as loans — with disastrous effects. The debate on this subject has been around for many decades, but no one has shed more light on this subject than De Soto. I fully expect that this book will continue to be mandatory reading for any banking scholar for decades ahead.

It is the thesis of L. Albert Hahn, another forgotten anti-Keynesian, that all excess money creates illusions of prosperity. He was once an advocate of Keynesian-style economic management, but he saw the error then wrote this fabulous and passionate attack on the whole theoretical and political apparatus. Mises was a big advocate of this book: The Economics of Illusion.

It doesn't say good things about our world where people in college read the Keynesians, are taught that they were right about free markets, but meanwhile truly great economists like Hahn are forgotten — forgotten so much, in fact, that this book has been out of print for many decades. The Mises Institute has made it available again. Isn't it time we revise our sense of what ideas deserve study, and what ideas deserve to truly drop down the memory hole?

Hahn was not alone among the great economic thinkers of this age. The New York Times employed one as its top editorialist: Henry Hazlitt. He warned constantly about the dangers of the dollar creation. His first great book against the Marshall Plan's foreign aid was Will Dollars Save the World?

Then he turned his fire on the Bretton Woods agreement, and he was shot down for it — forced out. But who was right? The agreement broke down because it didn't allow dollar convertibility for American citizens.

Here you can read his analysis of not only Bretton Woods but the whole inflation issue: What You Should Know about Inflation. He lays out the entire issue: what is money, what it does, what government does to money, how the economy responds, what it means for your life, and what to do about it. Hazlitt of course advocated the gold standard.

Since Ron Paul has raised the issue of the gold standard, and is being treated like some kind of visitor from Mars for having mentioned the subject at all, we need to know more about the true American heritage of the gold standard. This is why I'm personally very fired up that the Mises Institute has brought back William Gouge's Short History of Money and Banking, which I first read while working for Ron in his congressional office.

Gouge lived from 1796 through 1863 and was involved in all the great debates on banking in the 19th century. His book is a major attack on all inflationary finance, and reading him underscores just how universal are the lessons on money and banking — universal in the sense that they apply in all times and all places.

Back in the 19th century, there were many people who wanted inflation: bankers, debtors, and the government. What a surprise! Who has an interest in sound money? Consumers, savers, and liberty-loving citizens. This is the essential conflict. Are we going to have a monetary regime rooted in robbery, or one rooted in honesty? Gouge was on the side of honesty, and he inspires us today.

Coming a few decades later, but along the same lines, is Charles Holt Carroll's Organization of Debt Into Currency. This is one of those books that develops a hard-core cadre of fans. When we started reprinting these great American economic classics, people began to ask us: what about Carroll? Well, here it is, and once you get into the book, you realize why Rothbard and George Reisman and so many others swear by it. He patiently explains the difference between money and debt and how the government goes about sowing confusion about what is what.

Now, Ron Paul stands in this tradition of thinkers in every way. Even on the campaign stump, he speaks about the evil of fiat money and Fed management of the nation's money stock. In a true sense, he says, we've put a cartelized gang of central planners in charge of the good that constitutes half of every economic exchange, and we are paying the price in terms of declining purchasing power, exchange-rate chaos, rampant debt, and growing crises in sector after sector.

Is there a way out? Most certainly! It goes by the name of gold. Make the dollar as good as gold and you eliminate the inflation problem and the business cycles that go along with it. Here is the great secret of the gold standard. The problem is not that it is unviable from the perspective of economics; the problem is that there are many people allied against it: the big banks, the creditor class, and government. You see, gold would provide a hard-core anchor for liberty. Under the right form of the gold standard, government could no longer spend with impunity or run up debt without limit. The resources it spent would have to be raised the old-fashioned way.

It behooves every American to read Ron's book, really his manifesto on the topic. It is called The Case for Gold. He covers 19th-century monetary history and discusses several plans for instituting a gold standard.

Note that I didn't say "going back" to a gold standard, because if you look at past gold standards, there was always a flaw in the form of government intervention. There was the crazy system called bimetallism. There was the lack of domestic convertibility after the New Deal. There were the guarantees in the form of central bank backing. There were special privileges in the law.

The gold standard that Ron favors is not complicated: it is the one that would emerge in a world of freedom, a free-market money.

If his large book seems like too much, have a look at this primer: Gold, Peace, and Prosperity. You can read it in an hour. It explains why you should care about these issues, and why the government doesn't want you to care about them.

I never expected that, in my lifetime, the money issue would again become central to politics, but Ron — inspired by Mises and Rothbard — has done it.

And why not? The topic was huge in the 19th century, when people understood the dangers of putting the government in charge of everything.

Now we take the socialization of money and credit for granted. It is time we rethink all this. The restoration of sound money would be the greatest single stroke for liberty taken in 100 years.