Does It Make Sense to Resurrect the Glass-Steagall Act? | Mises Institute
Skip to main content

GET NEWS AND ARTICLES IN YOUR INBOXPrint
A
A
Home | Mises Library | Does It Make Sense to Resurrect the Glass-Steagall Act?

Does It Make Sense to Resurrect the Glass-Steagall Act? 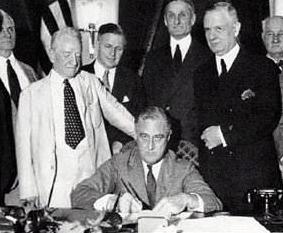 At the end of January, President Barack Obama announced that he is planning to introduce new regulations for the banking industry, to prevent excessive speculation. According to the president, no bank or financial institution that contains a bank will own, invest in, or sponsor a hedge fund or private equity fund, or have proprietary trading operations unrelated to serving customers for its own profit.

The driving force behind this plan is the former Federal Reserve Board chairman Paul Volcker who, it seems, wants to resurrect the Glass-Steagall Act of 1933. Instead of the separation of commercial and investment banking, we will now have a separation of banking business from proprietary trading, hedge funds, and private equity. In his testimony to the Senate on February 2, 2010, Volcker said,

The specific points at issue are ownership or sponsorship of hedge funds and private equity funds, and proprietary trading — that is, placing bank capital at risk in the search of speculative profit rather than in response to customer needs.

Some provisions of the Glass-Steagall Act, such as Regulation Q, which allowed the Federal Reserve to regulate interest rates on savings accounts, were repealed in 1980. The provisions that prohibited a bank-holding company from owning other financial companies were repealed on November 12, 1999. The repeal enabled commercial banks to underwrite and trade instruments like mortgage-backed securities, and establish structured investment vehicles (SIVs) that bought those securities.

The year before the repeal, subprime loans were around 10% of all mortgage lending. By 2005 they were approaching 21%.

From this way of thinking, it would appear that a reform along the lines as suggested by Volcker could stabilize financial markets and prevent boom–bust cycles.

The opponents of the Volcker plan, such as the Federal Reserve Board governor, Kevin Warsh, are of the view that the plan may only stifle the economy. In his comments published in a Financial Times opinion piece (February 2, 2010), he said,

We must resurrect market discipline as a complement to prudential supervision. Otherwise, the spectre of government support threatens to confuse price signals and create a class of institutions that operate under different rules.… The US economy runs grave risks if we slouch toward a quasi–public utility model.

According to opponents, the best way to fix the problem is to allow the market forces to do the job.

The proponents for less control in the banking industry hold that fewer restrictions imply a better use of scarce resources, which will lead to the generation of more real wealth.

It is true that a free-banking environment is an agent of wealth promotion through the efficient use of scarce real resources, whilst controlled banking stifles the process of real-wealth formation. However, the opponents of the Volcker plan overlooked that the present banking system has nothing to do with free banking or a free market.

What we have at present is a banking system within the framework of the central bank, which promotes monetary inflation and the destruction of the process of real-wealth generation through fractional-reserve banking.

In the present system, the more unrestricted the banks are, the more money they can generate "out of thin air," and the more damage they can inflict upon the wealth-generation process.

This must be contrasted with genuine free banking, i.e., the absence of the central bank, where the potential for the creation of money out of thin air is minimal.

Take, for instance, Farmer Joe, who sells his saved 1kg of seeds for $100. He then deposits this $100 with Bank A. Note that the $100 is fully backed up by the saved 1kg of seeds. Also, observe that Joe is exercising his demand for money by holding it in the demand deposits of the bank. (Joe could also have exercised his demand for money by holding the money at home in a jar, or by keeping it under the mattress).

Whenever a bank takes a portion of Joe's deposited money and lends it out, it sets in motion serious trouble. Let us say that Bank A lends $50 to Bob by taking $50 out of Joe's deposit. Remember that Joe still exercises his demand for $100. No additional saving backs up this $50. Once Bob uses the money, he in fact engages in an exchange of nothing for something. This amounts to nonproductive consumption of real wealth. What we have here is $150 that is backed by $100. (Remember that $100 is fully backed up by 1kg of seeds — real savings).

Now, Joe demands money, not to hold it as such but to use it as the medium of exchange. So let us say that Joe decides to use his $100 to buy goods from Sam, who banks with Bank B. On the following day, Bank B will present the check on $100 to Bank A. In short, $100 is shifted from A to B. No more money is now left at Bank A.

Let us say that Bob, who borrowed $50 from Bank A, also buys goods from Sam, who keeps his money with Bank B. This will pose a problem to Bank A since it doesn't have the $50 to pay Bank B once the check on $50 written against A is presented by B. In short, Bank A is "caught," so to speak.

As the number of banks rises and the number of clients per bank declines, the chances that clients will spend money on the goods of individuals that are banking with other banks will increase. This in turn increases the risk of the bank not being able to honor its checks if this bank practices fractional-reserve banking — i.e., lends fictitious claims or money out of thin air.

Conversely, as the number of competitive banks diminishes, that is, as the number of clients per bank rises, the likelihood of being "caught" practicing fractional-reserve banking diminishes. In the extreme case, if there is only one bank, it can practice fractional-reserve banking without any fear of being "caught," since it will always clear its own checks. Thus Sam, who sold goods to Bob, would simply deposit the check with Bank A.

We can thus conclude that in a free-banking environment with many competitive banks, if a particular bank tries to expand credit by practicing fractional-reserve banking, it runs the risk of being caught. So it is quite likely that in a free-market economy the threat of bankruptcy will bring to a minimum the practice of fractional-reserve banking.

The Existence of a Central Bank Encourages Fractional-Reserve Banking

This is, however, not so in the case of the existence of a central bank. By means of monetary policy, the central bank protects fractional-reserve banking and thus the creation of money out of thin air.

The modern banking system can be seen as one huge monopoly bank, guided and coordinated by the central bank. And as we have seen, one monopoly bank can practice fractional-reserve banking without running the risk of being caught.

Through ongoing monetary management, i.e., money pumping, the central bank makes sure that all the banks engage jointly in the expansion of credit out of thin air.

The joint expansion in turn guarantees that checks presented for redemption by banks to each other are netted out. By means of monetary injections, the central bank makes sure that the banking system is liquid enough that banks will not bankrupt each other.

The Myth of Financial Deregulation

Prior to the financial deregulation of the 1980s, we had controlled banking. Banks' conduct was guided by the central bank. Within this type of environment, banks' profit margins were nearly predetermined, because the Fed imposed interest-rate ceilings and controlled short-term interest rates. Hence, the life of the banks was quite easy, albeit boring.

The introduction of financial deregulations and the dismantling of the Glass-Steagall Act changed all that. The deregulated environment resulted in fierce competition between banks.

The previously fixed margins were severely curtailed. This in turn called for an increase in volumes of lending in order to maintain the level of profits.

This increase culminated in an explosion in the creation of credit out of thin air. Indeed, in the deregulated environment, banks' ability to amplify the Fed's pumping has enormously increased. 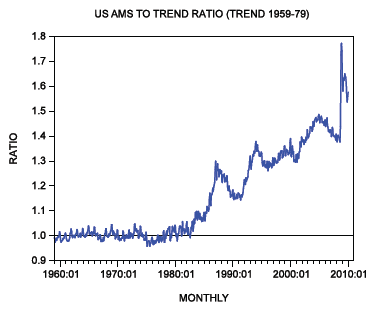 We suggest that it is this massive explosion of money that has severely damaged the pool of real savings and laid the foundation for the present economic crisis. Rather than promoting an efficient allocation of real savings, the current "deregulated" monetary system has been channeling money created out of thin air across the economy.

From this it follows that in the present banking system, what is required to reduce a further weakening of the real-wealth-generation process is to introduce tighter controls on banks.

As Murray Rothbard put it,

Many free-market advocates wonder: why is it that I am a champion of free markets, privatization, and deregulation everywhere else, but not in the banking system? The answer should now be clear: Banking is not a legitimate industry, providing legitimate service, so long as it continues to be a system of fractional-reserve banking: that is, the fraudulent making of contracts that it is impossible to honor.2

Pay attention that we don't suggest suppressing the free market, but suppressing banks' ability to generate credit out of thin air. The present banking system has nothing to do with a true free-market economy.

It must be reiterated here that more controls in the framework of central banking can only slow down the pace of the erosion of real-wealth formation. They cannot prevent the erosion. (Remember, the Fed continues to pump money to navigate the economy). More controls will simply suppress banks' ability to amplify the Fed's pumping. In this sense, controls are preferable to a so-called deregulated banking sector.

Would more controls, i.e., keeping the Glass-Steagall Act intact, have prevented the current economic crisis? We suggest that the crisis wouldn't have been as severe, since controls would have prevented the massive monetary explosion since the early 1980s, which put the pool of real savings under severe pressure.

The financial deregulations have sped up the erosion of the real-wealth-generation process. Consequently, instead of having a severe crisis in 20 years' time, we have it now.

Now, if controls were the answer for economic instability, then why, prior to financial deregulation in early 1980s, did the US economy experience vicious economic swings? 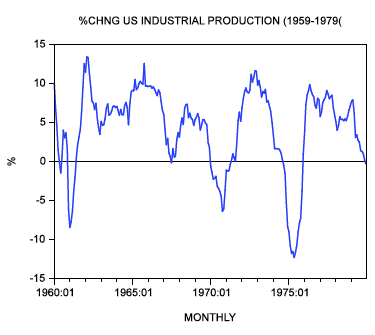 In the present setup, the policy makers of the Fed are of the view that they can somehow navigate the economy toward the path of stable economic growth. Their navigation via money pumping leads to fluctuations in the money supply's rate of growth. This in turn leads to the boom–bust cycles that the Fed supposedly is trying to smooth out or eliminate all together.

As long as we have a central bank, it makes sense to impose tighter controls on banks in order to minimize the damage the central bank's policies inflict. A better alternative is, of course, to have genuine free banking without the central bank.