GET NEWS AND ARTICLES IN YOUR INBOXPrint
A
A
Home | Mises Library | Did the Fed Cause the Housing Bubble?

Did the Fed Cause the Housing Bubble?

One of the few positive developments from the housing bubble is that many mainstream economists have recognized the pernicious role played by the Federal Reserve. Indeed, some analysts on CNBC have discussed the outright abolition of the Fed.

The case against the Fed is straightforward: In an attempt to jumpstart the economy out of recession, Greenspan slashed the federal funds target from 6.5% in January 2001 down to a ridiculous 1% by June 2003. After holding rates at 1% for a year, the Fed then steadily ratcheted them back up to 5.25% by June 2006. The connection between these moves by the central bank, versus the pumping up and popping of the housing bubble, seemed to be more than just a coincidence. On the contrary, it looked like a classic example of the Misesian theory of the business cycle, in which artificially low interest rates lead to malinvestments, which then require a recession to correct.

Ironically, just as many mainstream analysts are seeing the wisdom of the Austrian view, two prominent libertarian economists, Jeffrey Rogers Hummel and David Henderson, have claimed the opposite. Hummel and Henderson (H&H) argue that despite its bad press as of late, the Fed really isn't to blame for the housing mess. Coming from other writers, one might suspect political motives for such views. Yet H&H are certainly no tools of the powers that be. We have here a purely academic disagreement, but even so I hope to show that H&H's position falls apart under scrutiny.

One of H&H's arguments to defend the Fed is that the low interest rates in the early 2000s weren't really that low after all, once we adjust for inflation. In their words,

Why do people judge the Federal Reserve, whether under Alan Greenspan or Ben Bernanke, to be a major cause of the subprime bust? They note how low interest rates were from 2002 through 2004 and make the classic mistake of using interest rates to judge monetary policy. If interest rates are low, they reason, monetary policy must have been excessively expansionary.

Years ago, Milton Friedman pointed out one problem with this reasoning by emphasizing the distinction between nominal and real rates. Nominal rates can be low because expected inflation is low, an indicator of tight monetary policy.

Although the general point is correct, it still doesn't exonerate Greenspan's Fed. As Figure 1 below indicates, even if we adjust the federal funds rate for the (forward-looking) actual annual rates of price inflation that occurred, rates were still remarkably low. One has to go back to the 1970s to see an "easier" monetary policy.1 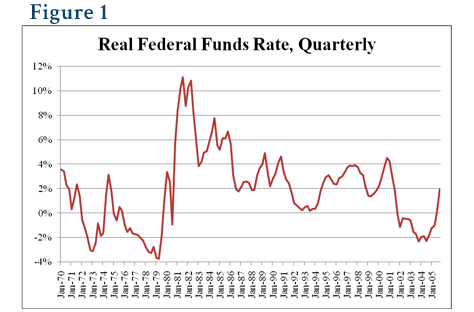 As the excerpt above alluded to, H&H think that interest rates are a poor gauge of Fed policy. Much better indicators, in their view, are the growth rates of various monetary aggregates:

The Fed most directly controls the monetary base. Its year-to-year annual growth rate since 2001 fell from 10% to below 5% in 2006 and now is 2%. Also, nearly all of the growth of the monetary base went into currency, much of which is held abroad.

Now something is a bit suspicious in the above figures. Few doubt that the Fed had been fairly moderate by 2006 in its handling of affairs; after all, the housing bubble popped. So the statistics given by H&H really don't help us to evaluate whether the housing boom can be blamed on the Fed. We get a much better idea by looking at the plots of the growth rates over time. Figure 2 below contrasts the federal funds target rate with the annual growth rate in the monetary base (i.e., total bank reserves plus currency). 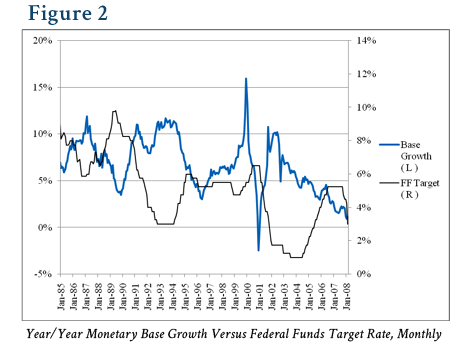 Figure 2 seems to be the textbook illustration of how the Federal Reserve conducts its open market operations: When it cuts the federal funds target rate, it pumps reserves into the system, i.e., expands the monetary base. On the other hand, when the Fed raises interest rates, it slows the rate of monetary expansion. Except for the large blips due to the Y2K scare — when the Fed flooded the system with liquidity and then sucked it right back out — the early 2000s fit the pattern perfectly. That is, when Greenspan cut the target rate from January 2001 through June 2003, the monetary base grew rapidly. Eventually the base growth came back down to moderate territory, but that was when the Fed was ratcheting up interest rates, just as we would expect.

Indeed, to see just how inflationary the Fed's monetary policy was during the early 2000s, we can consult Figure 3 below. This shows a longer plot, this time of annual growth rates in both the monetary base and M1 (i.e., currency, traveler's checks, and checkable deposits). 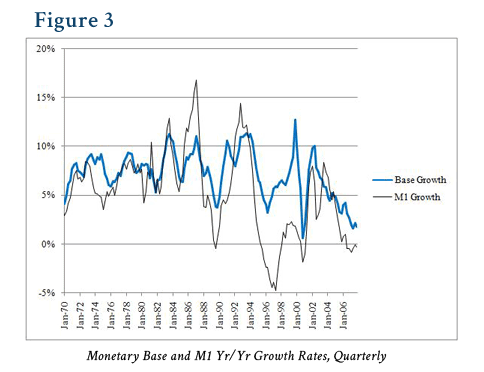 Studying Figure 3, it is hard to make sense of the H&H thesis. When the Fed was (I allege) irresponsibly fueling the housing boom from 2000 to 2004, both the monetary base and M1 grew at annual rates that were comparable to the experience of the 1970s.2

(In addition to the Y2K blips up and down, there was also a sharp injection and pullback due to the September 11, 2001 attacks that make the black line bounce around.)

Unless H&H want to argue that the Fed conducted a tight policy throughout the 1970s, it seems their defense of Greenspan falls apart.

The Fed's role in the housing boom and bust is a classic illustration of the Austrian business cycle theory. Indeed, the Misesian explanation in this case is so compelling that more and more economists and financial analysts are being persuaded. Hummel and Henderson's attempt to argue otherwise fails.