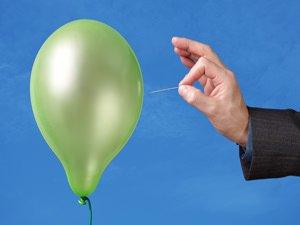 Deflation is feared not only by the followers of Milton Friedman (those from the so-called Monetarist or Chicago School of economics), but by Keynesian economists as well. Leading Keynesian Paul Krugman, in a 2010 New York Times article titled “Why Deflation is Bad,” cited deflation as the cause of falling aggregate demand since “when people expect falling prices, they become less willing to spend, and in particular less willing to borrow.”1

Presumably, he believes this delay in spending lasts in perpetuity. But we know from experience that, even in the face of falling prices, individuals and businesses will still, at some point, purchase the good or service in question. Consumption cannot be forever forgone. We see this every day in the computer/electronics industry: the value of using an iPhone over the next six months is worth more than the savings in delaying its purchase.

Another common argument in the defamation of deflation concerns profits. With falling prices, how can businesses earn any as profit margins are squeezed? But profit margins by definition result from both sale prices and costs. If costs — which are after all prices themselves — also fall by the same magnitude (and there is no reason why they would not), profits are unaffected.

If deflation impacts neither aggregate demand nor profits, how does it cause recessions? It does not. Examining any recessionary period subsequent to the Great Depression would lead one to this conclusion.

In addition, the American economic experience during the nineteenth century is even more telling.

Twice, while experiencing sustained and significant economic growth, the American economy “endured” deflationary periods of 50 percent.2 But what of the “statistical proof” offered in Friedman’s A Monetary History of the United States? A more robust study has been completed by several Federal Reserve economists who found:

If deflation does not cause recessions (or depressions as they were known prior to World War II), what does? And why was it so prominently featured during the Great Depression? According to economists of the Austrian School of economics, recessions share the same source: artificial inflation of the money supply. The ensuing “malinvestment” caused by synthetically lowered interest rates is revealed when interest rates resort to their natural level as determined by the supply and demand of savings.

In the resultant recession, if fractional-reserve-based loans are defaulted or repaid, if a central bank contracts the money supply, and/or if the demand for money rises significantly, deflation may occur. More frequently, however, as central bankers frantically expand the money supply at the onset of a recession, inflation (or at least no deflation) will be experienced. So deflation, a sometime symptom, has been unjustly maligned as a recessionary source.

But today’s central bankers do not share this belief. In 2002, Ben Bernanke opined that “sustained deflation can be highly destructive to a modern economy and should be strongly resisted.”4 The current Federal Reserve chair, Janet Yellen, shares his concerns:

... it is conceivable that this very low inflation could turn into outright deflation. Worse still, if deflation were to intensify, we could find ourselves in a devastating spiral in which prices fall at an ever-faster pace and economic activity sinks more and more.5

Now unmoored from any gold standard constraints and burdened with massive government debt, in any possible scenario pitting the spectre of deflation against the ravages of inflation, the biases and phobias of central bankers will choose the latter. This choice is as inevitable as it will be devastating.