In Defense of the Market's Worst Producers 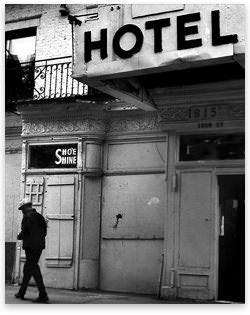 "Exposure to Austrian philosophy has forced me to rethink almost everything I once believed about Hampton House."

This is a story about a few people I've known who lived "on the margin," and how I believe Austrian thinking applies to them and probably countless others like them.

Students of Austrian economics will be familiar with the concept of marginality. Carl Menger's marginal-utility theory of value revolutionized economic science: every textbook deals with marginal product and marginal cost, and it's the marginal worker who gets priced out of the market by the minimum wage. In its economic aspect, marginality has been dealt with very thoroughly.

As with much else in economics, however, there is a more personal side to value theory that I believe deserves more attention than it has received. Just as there is in reality no such thing as an evenly rotating economy, so too has there never been an evenly lived life. To the extent that they fail to take this most subjective element into account, even the most theoretically rigorous models of human action run the risk of succumbing to an intellectual sterility in which the humanity of the actor is forgotten. A look into the deeper significance of marginality may offer us one way of avoiding this trap in other areas.

Over a decade ago I spent a year working at a "residence club" that I'll call Hampton House, a kind of misbegotten hybrid somewhere between a five-star hotel and a youth hostel. Our clientele were mostly foreign students on government-subsidized study-abroad programs of sightseeing and bar hopping, punctuated by the occasional English class as mandated by the student-visa regulations. As the hotels downtown were prohibitively expensive, residence clubs were among the most attractive options for these students. The same company that owned Hampton House owned most of the others as well.

Things happened there almost daily that make Fawlty Towers seem like the Ritz Carlton. It was a place where the manager's typical response to a perfectly legitimate guest complaint ran something like this: "Well, it's not my fault you decided to stay here, is it?"

I personally witnessed enough insanity to fill a small book, from management's Keystone Cops–like investigation into who had been urinating on the kitchen phone (of course no one had — water from an aging steam pipe was seeping through the yellow insulation onto the shelf below), to the assistant manager who falsely claimed to be dying of cancer and would sneak around late at night putting his ear to residents' doors in an attempt to sniff out "suspicious activity."

As for working conditions, employees shared tiny, minimally furnished rooms, unisex hall showers, and an employee lunch about which nothing printable can be said. There was no 401K, no vacation time, no health insurance. Wage slavery was not a factor because there were no wages, and each new hire had to sign a form consenting to immediate eviction upon termination. One manager had been fired for selling drugs, another was clearly using them, and a third had turned the basement of the facility into a toy-car museum.

It is hardly surprising that such a marginal place would attract job applicants from outside the mainstream. Some were like me: college graduates who had left home with little more than gas money in their pockets, driven by the deceptively enticing prospect of trying their luck in the big city. Others had already tried their luck and lost. My roommate Ted had once been a multimillionaire with a seat on the Chicago Board of Trade. But he lost it all when, after two weeks of spending more time with Jack Daniels than Dow Jones, the phone rang and the voice at the other end said "Margin call!" Now, some three decades later, he was on the margin again, picking up an extra shift here and there for $20 whenever someone needed time off.

"As counterintuitive as it may seem, society needs its marginal producers."

For some, however, marginality was more than a mere circumstance; it was a way of life. Their résumés typically included psychiatric hospitalization, often coupled with an outpatient regimen of antipsychotics. The most memorable member of this group was Ben, the mild-mannered company auditor. Kind to a fault and intellectually keen, Ben was the longest-serving Hampton House employee in living memory. For a long time I could not understand how someone of his caliber could remain so intractably loyal to such an undeserving employer. That is until he appeared at the front desk one morning, pale and perspiring, and asked me to call the manager. "I have ants in my room," he said. "Millions of them. And CIA agents are trying to break in my window and steal my computer. You have to call somebody. I can't hold them off forever."

Ben finally stopped hallucinating after about three days and a conversation with a mercifully sympathetic police officer. But I never questioned his history of marginal employment again.

Since then I have lost touch with most of the tortured souls I knew back then, and many of their names have faded from memory. But I recall very clearly how they felt about their circumstances. The vast majority considered themselves exploited, and at the time I shared this view. Hampton House was, after all, practically the poster child for the "socially irresponsible" business. Thanks to its enviable location and an aversion to capital maintenance rivaled only by Alcatraz, it was able to rake in enormous profits even while operating at less than half capacity — and this despite a business philosophy that saw employees as liabilities, managerial competence as a luxury, and customers as a necessary evil.

Yet exposure to Austrian philosophy has forced me to rethink almost everything I once believed about Hampton House. Were we really the victims of greedy capitalist exploitation and profit seeking? Utility theory puts this question differently: Who chose to live under those conditions, and why? Had we not all come to Hampton House precisely because it offered something that each of us valued highly enough to justify the opportunity costs associated with being there?

For me it brought tremendous benefits — benefits of a kind no government could ever mandate. It meant that I could be financially independent, even with very little money. It meant that every time I stepped out the front door I found myself in the middle of what is still the most dazzling and wondrous city I have ever seen. Most of all, it meant a few final, precious months of well-squandered youth before I would at last have to break down and "get a real job." Whatever the tradeoffs involved, Hampton House offered me the best opportunity for what economists call maximizing utility. And it must have been so for the others as well, or they would not have been there.

Yet the Austrian explanation of value is not merely a theory of utility, but of marginal utility — a concept that, when fully appreciated, imbues economics with a more deeply human significance than is generally attributed to it. Consider: most people today would cite Hampton House as a prime example of the market's failure to protect the weak. It would be to them a repudiation of liberty as the foundation of a just social order, providing still further justification for minimum wages, labor legislation, and bureaucratic oversight.

But seen through Austrian eyes, the truth is precisely the opposite. As counterintuitive as it may seem, society needs its marginal producers. However poor conditions may have been, the fact remains that without Hampton House some of the people working there would not have had a job at all. Any company with competent oversight would have fired them after a week. Instead, they discovered that the margin has room even for them.

To be sure, it is only the rare firm that can be as bad as Hampton House was and survive for any extended period of time. That is because in most cases competition weeds such enterprises out of the market, effecting a transfer of their capital into the hands of more capable producers — the "consumer sovereignty" of which Mises spoke so often. Yet as Butler Shaffer reminds us in his book Boundaries of Order, life itself "functions at the margin." And indeed, there are those marginal producers who manage somehow to hang on year after year. A few even thrive. Why? Because they have found a niche where they are needed. And because they have done so, society's most marginal people have a place where they are needed as well. Abandoned to the "compassion" of the social reformer or legislator, many of them would have nowhere to go except a state mental-health facility. Left to the market, they remain free to pursue a meaningful life by making a productive contribution, however modest, to the lives of others.

This is the deeper meaning of marginal utility: that when society is free, even the most marginal among us need not be marginalized.

This article is dedicated to Ben, who passed away in his room at Hampton House last year.

David Greenwald received his BA in German from Hendrix College and his master's in counseling studies from Capella University. He currently teaches high school English in Slovenia, where he conducts extracurricular projects on entry-level Austrian economics, banking and the business cycle, and the sociology of violence. He is also a lecturer at the Cato Institute's Liberty Seminars.