In Defense of Human Rights 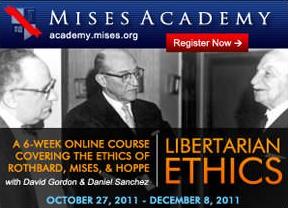 " I support Rothbard, so students may enjoy the conflicts sure to arise between Danny and me."

In The Ethics of Liberty, Murray Rothbard proposed a natural-law foundation for libertarianism. In doing so, he rejected as not fully adequate the distinctive brand of utilitarian ethics defended by his teacher Ludwig von Mises. Was he correct in his criticisms of Mises? If you are attracted to both views, must you choose between them?

Both Mises's and Rothbard's positions have aroused a great deal of discussion. Hans Hoppe decisively intervened in this discussion with his proposal, a libertarian version of argumentation ethics. Hoppe's approach accepts Rothbard's conclusions but establishes them on a rather different basis: Rothbard argued from an Aristotelian-Thomist basis; Hoppe, like his teacher Jürgen Habermas, owes much to Kant. In his argument, Hoppe claims that to deny that you own yourself involves a performative contradiction. Is he right?

These are among the topics that Danny Sanchez and I propose to examine. Students who take this course will acquire a good grounding in these three major theories and be in a position to form their own opinion about them.

Further, looking at these three theories offers an excellent way to study the foundations of ethics. Are ethical judgments objectively true? Is ethics merely a social institution, or is it more than this?

In an introductory lecture on October 27, I'll describe the three positions and explain how they raise the foundational issues just mentioned. Danny Sanchez, whose penetrating posts1 have shown him to be a foremost expositor and defender of Mises's ethics, will give three lectures on that subject. I'll give two more lectures, one each on Rothbard and Hoppe. I support Rothbard, so students may enjoy the conflicts sure to arise between Danny and me. We look forward to seeing you in the course.