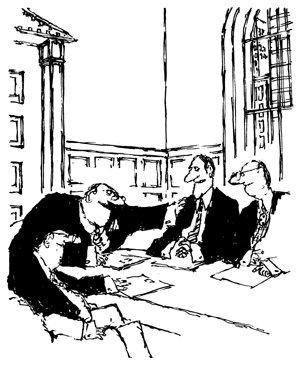 [Excerpted from Defending the Undefendable. An MP3 audio file of this article, read by Jeff Riggenbach, is available for download.]

"Excellent idea, Winslow. The rich too must eat in a famine. Along with staples we’ll store up ten thousand tons of gourmet foods."

"Kill the speculators!" is a cry made during every famine that has ever existed. Uttered by demagogues, who think that the speculator causes death through starvation by raising food prices, this cry is fervently supported by the masses of economic illiterates. This kind of thinking, or rather nonthinking, has allowed dictators to impose even the death penalty for traders in food who charge high prices during famines. And this is done without the feeblest of protests from those usually concerned with civil rights and liberties.

Yet the truth of the matter is that, far from causing starvation and famines, it is the speculator who prevents them. And far from safeguarding the lives of the people, it is the dictator who must bear the prime responsibility for causing the famine in the first place. Thus, the popular hatred for the speculator is as great a perversion of justice as can be imagined. We can best see this by realizing that the speculator is a person who buys and sells commodities in the hope of making a profit. He is the one who, in the time-honored phrase, tries to "buy low and sell high."

But, what does buying low, selling high, and making large profits have to do with saving people from starvation? Adam Smith explained it best with the doctrine of "the invisible hand." According to this doctrine, "every individual endeavors to employ his capital so that its produce may be of the greatest value. He generally neither intends to promote the public interest, nor knows how much he is promoting it. And he intends only his own security, his own gain. He is led in this as if by an invisible hand to promote an end that was no part of his intention. By pursuing his own interest he frequently promotes that of society more effectually than when he really intends to promote it."1

The successful speculator, therefore, acting in his own selfish interest, neither knowing nor caring about the public good, promotes it.

First, the speculator lessens the effects of famine by storing food in times of plenty, through a motive of personal profit. He buys and stores food against the day when it might be scarce, enabling him to sell at a higher price. The consequences of his activity are far-reaching. They act as a signal to other people in the society, who are encouraged by the speculator's activity to do likewise. Consumers are encouraged to eat less and save more, importers to import more, farmers to improve their crop yields, builders to erect more storage facilities, and merchants to store more food. Thus, fulfilling the doctrine of the "invisible hand," the speculator, by his profit-seeking activity, causes more food to be stored during years of plenty than otherwise would have been the case, thereby lessening the effects of the lean years to come.

However, objections will be raised that these good consequences will follow only if the speculator is correct in his assessment of future conditions. What if he is wrong? What if he predicts years of plenty — and by selling, encourages others to do likewise — and lean years follow? In this case, wouldn't he be responsible for increasing the severity of the famine?

"Fulfilling the doctrine of the 'invisible hand,' the speculator, by his profit-seeking activity, causes more food to be stored during years of plenty than otherwise would have been the case, thereby lessening the effects of the lean years to come."

Yes. If the speculator is wrong, he would be responsible for a great deal of harm. But there are powerful forces at work that tend to eliminate incompetent speculators. Thus, the danger they represent and the harm they do are more theoretical than real. The speculator who guesses wrong will suffer severe financial losses. Buying high and selling low may misdirect the economy, but it surely creates havoc with the speculator's pocketbook.

A speculator cannot be expected to have a perfect record of prediction, but if the speculator guesses wrong more often than right, he will tend to lose his stock of capital. Thus he will not remain in a position where he can increase the severity of famines by his errors. The same activity that harms the public automatically harms the speculator, and so prevents him from continuing such activities. Thus at any given time, existing speculators are likely to be very efficient indeed, and therefore beneficial to the economy.

Contrast this with the activity of governmental agencies when they assume the speculator's task of stabilizing the food market. They too try to steer a fine line between storing up too little food and storing up too much. But if they are in error, there is no weeding-out process. The salary of a government employee does not rise and fall with the success of his speculative ventures. Since it is not his own money that will be gained or lost, the care with which bureaucrats can be expected to attend to their speculations leaves much to be desired. There is no automatic, ongoing daily improvement in the accuracy of bureaucrats, as there is for private speculators.

The oft-quoted objection remains that the speculator causes food prices to rise. If his activity is carefully studied, however, it will be seen that the total effect is rather the stabilization of prices.

In times of plenty, when food prices are unusually low, the speculator buys. He takes some of the food off the market, thus causing prices to rise. In the lean years that follow, this stored food goes on the market, thus causing prices to fall. Of course, food will be costly during a famine, and the speculator will sell it for more than his original purchase price. But food will not be as costly as it would have been without his activity. (It should be remembered that the speculator does not cause food shortages; they are usually the result of crop failures and other natural or man-made disasters.)

Yet instead of honoring the speculator, demagogues and their followers revile him. But prohibiting food speculation has the same effect on society as preventing squirrels from storing up nuts for winter — it leads to starvation.