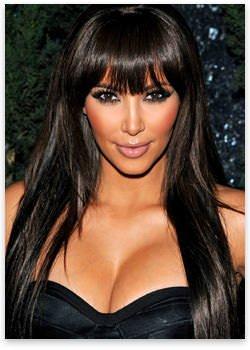 Unlike the majority of us who live relatively boring lives, Kim Kardashian has made a career out of selling the public an up-close-and-personal view of her private affairs. This recently included a rumored farce of a wedding to NBA superstar Kris Humphries, which fizzled after only three days but made the reality star millions.

Ms. Kardashian's financial success hasn't been met warmly by everyone however. According to the Wall Street Journal, an activist group composed of union and left-wing political interests has started a campaign to push for an increase in California's millionaire's tax and is targeting Kardashian directly. Titling themselves "Courage Campaign," this association is dedicated to "bringing progressive change and full equality in California and across the country." In addition to their website TaxKimK.com, the group has created a video to promote their agenda. The video claims that Ms. Kardashian made more than $12 million in 2010 yet only paid 10.3 percent in taxes. That's only "1 percent more" than the 9.3 percent that "middle class" Californians pay.

Like ravenous sharks at the smell of blood, Courage Campaign has its eyes set on more income ripe for plundering through taxation. Their aim is to increase the Golden State's millionaire tax from 10.3 percent to 13.3 percent for income over $1 million and 15.3 percent for income over $2 million. On top of California's already horrendous business climate, this tax will undoubtedly provide more of an incentive for Atlases to do the proverbial shrugging and flee overzealous and overburdening government regulation.

Whether or not you agree with the type of life Kim Kardashian leads is ultimately a question of morality and ethics. However, her ability to attract fans and monetary compensation is something to admire. Unlike the government, Kardashian forces no one to purchase the products she endorses, view her television reality shows, attend her birthday party, or cover her exploits for various media publications. What she gives up in terms of a private life has brought her and her family a financially comfortable standard of living.

But like Frédéric Bastiat's important lesson on accounting for the unseen in economic affairs, the Kardashian tale goes far beyond the millions she rakes in every year. In The Anti-Capitalist Mentality, Mises writes on the importance of capital and savings:

The only source of the generation of additional capital goods is saving. If all the goods produced are consumed, no new capital comes into being. But if consumption lags behind production and the surplus of goods newly produced over goods consumed is utilized in further production process, these processes are henceforth carried out by the aid of more capital goods.… Capital is not a free gift of God or of nature. It is the outcome of a provident restriction of consumption on the part of man. It is created and increased by saving and maintained by the abstention from dissaving.

From the theory of diminishing marginal utility, we know that those with more income are in a better position to add to their saving balances. Money, in addition to being a commodity, acts as a unit of exchange. The more money one accumulates, the more goods and services can be purchased. As demands are met on an individual's priority valuations, it becomes feasible for income to lose its appeal to meet immediate demand in favor of future consumption.

The act of savings both forestalls present consumption and, when placed into a bank or financial institution, adds to the amount of funds available to be lent to aspiring entrepreneurs. With more funds available, longer-term and better methods of production can be sought to increase the supply of consumer goods. In an economy not subject to continual monetary debasement and inflation via a central bank, prices are allowed to fall, thus raising real income for consumers.

Reality stars such as Kim Kardashian aid in this process as their revenue-generating ability allows them to set aside more of their income. This accumulation of savings leaves more money to be invested in base capital, which increases the productive capacity of the economy. This isn't supply-side economics; it's a simple acknowledgement of the scarcity that dominates our world.

The public should always be wary of the motives of those who use emotionally loaded terms like "child healthcare" and "middle-class jobs" to make the case for further taxation. Their object tends not to lie in their admitted goal but with enriching their own ends. Courage Campaign partners with many California labor unions; it only makes sense that they would push for tax increases. More money in the state coffers means more tax funds to throw into an already bloated public sector.

And as economist David Henderson points out, even Courage Campaign's math is disingenuous. If Kardashian does indeed make $12 million a year, she pays about $1.2 million in income taxes compared to the $2,000 the average middle class Californian family with an income of $47,000 pays. The difference between $2,000 and $1.2 million is hardly the "1 percent more" statistic thrown around.

Rather than generating real wealth, Courage Campaign wishes more money to be confiscated from the productive members of the state and given to bureaucrats to divvy how they see fit. But the political class will never be capable of the type of efficiency-driven economic calculation private individuals must utilize when limited in their income earned through voluntary means. If California ever wants to improve its economy, both taxes and public-sector spending must be cut significantly. This in turn frees up more money for the private sector to create jobs fulfilling demand. The government should not be looked at as a job creator but instead as the parasitic institution it is. To really improve the lives of its citizens, California must attract successful individuals like Kim Kardashian, not scare them away with the threat of more thievery.