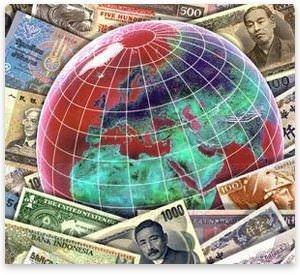 When my book on the Great Depression came out — shortly after Obama's inauguration — I told radio interviewers that our current economic crisis was the start of the Second Great Depression. The Federal Reserve and the government implemented the same types of policies after the housing crash as they did in the 1930s after the stock-market crash.

Another parallel to the Great Depression is the possibility of a massive trade war. Back then, the United States government passed the infamous Smoot-Hawley Tariff, which in turn led to reciprocal trade barriers by other governments.

In our own time, US officials have pressured the Chinese to allow their currency to appreciate against the dollar. More recently, Europeans have complained about the Federal Reserve's plans for a second round of "quantitative easing" because of the advantage a weaker dollar gives to US exporters. Over the next few years, we may be in store for currency wars, in which nations continually print money in order to gain a temporary trade advantage. The end result, of course, will be accelerating price inflation and distorted production across the globe.

To the novice, a "strong currency" sounds like an unambiguous good. But a firm that exports its products may actually benefit, at least in the short run, from a currency that becomes weaker against other currencies.

For example, suppose we are in an initial equilibrium where €1 (i.e., one euro) trades for $1, and the price of a bushel of wheat is $5 and also €5. Then the Federal Reserve announces that it intends to double the quantity of US dollars in one month.

The announcement would lead to an immediate drop of the dollar in the foreign-exchange markets. In other words, the currency speculators who traded dollars against euros would anticipate the coming flood of new dollars and would bid down their price accordingly. Suppose the "dollar price" of a euro rose from $1 to $2 because of the Fed's bombshell announcement.

Consider things from the perspective of a United States–based miller. He could continue to buy wheat grown by his fellow American farmers at $5 per bushel, just as before. But if he wanted to import wheat grown in Europe — where it was still selling at €5 per bushel — now he would need to cough up $10 per bushel. This is because his $10 would be converted on the foreign-exchange market into €5, which could then be used to buy a bushel of wheat from a European farmer. Clearly, United States–based millers would switch their business to American farmers and wouldn't import any wheat from Europe.

The situation would be reversed for millers based in Europe. After the Fed's announcement, the euro would suddenly become twice as strong as the dollar. To buy $5 wheat from American farmers would take only €2.50 per bushel, as opposed to the €5 per bushel from European farmers. Obviously the millers in Europe would have an incentive to switch their business from European to American farmers.

In reality, it's not the case that suddenly American wheat farmers supply the whole world, and everyone else goes out of business. Instead, what happens is that the price of wheat — quoted in various currencies — itself adjusts very quickly when the dollar falls against other currencies. In our example, when currency speculators are pushing the euro from $1 to $2 (because of the Fed announcement), speculators in the agricultural markets push wheat up to (say) $8 per bushel, and down to €4 per bushel. In order to eliminate arbitrage opportunities, a new equilibrium will quickly arise in which wheat is the same price, whether quoted in dollars or euros, at the new exchange rate of $2 for €1.

At this point, it's tempting to think that the Fed's announcement would have no effect on the pattern of global production and trade, and that it would merely tinker with nominal price tags. But this isn't the case. Because domestic prices have various degrees of flexibility, the devaluation of the dollar in our example would give more than a fleeting advantage to American exporters.

Consider the wheat farmers: After the speculators quickly respond to the Fed's announcement, the price of wheat rises from $5 to $8 per bushel. It's certainly not that the wages of the employees working on the farm, or the mortgage payments made to the bank, will jump by a comparable percentage in a few moments. On the contrary, much of the American farmer's expenses will remain fixed in price even though the sale price of wheat has risen 60 percent. American wheat farmers will therefore find the dollar devaluation to be very lucrative. From their perspective, it will appear as if millers (both domestic and foreign) for some reason have a hankering for American wheat, and the American farmers will increase their output to satisfy the new demand.

Things are the opposite for the European farmers. The demand for their product will collapse, such that the new equilibrium price falls to €4 from its original level of €5. This 20 percent drop in price cannot be simply "passed on" to workers, who have labor contracts specifying how many euros per hour they must be paid. Consequently, European farmers will scale back their production of wheat.

In the grand scheme of things, the Fed's announcement of its plans to print more dollars will allow American wheat farmers (and other exporters of fungible commodities) to gain market share at the expense of farmers in other countries, whose currencies appreciate against the dollar. This is why Keynesian economists stress the (alleged) virtue of weakening a currency in order to "stimulate exports" and hence boost national output — net exports are a component of GDP in the standard formula.

As Bastiat taught, the good economist must look at the unseen consequences of a government (or central-bank) policy. Just because American wheat farmers gain a definite advantage from currency debasement doesn't mean it is a good idea.

In our example, American consumers are hurt by the depreciation. Wheat is now more expensive than before. If the consumers buy domestically, they must pay $8 instead of $5. Yet even if they buy from European farmers, they still must pay more, because of the change in exchange rate. (Specifically, it takes $8 to buy €4 with which they can purchase a bushel of wheat.) The same is true for other fungible goods that trade on the world market: their dollar prices rise, and their euro-denominated prices do not fall enough, such that the goods end up being more expensive.

Another group hurt by the announcement are those American producers who sell domestically but import materials. For example, US airlines would be hurt because the price of crude oil would rise sharply with the Fed announcement.

It's true that, eventually, the Fed would create the new dollars, and these would eventually ripple out into the pockets of American consumers and airline shareholders. But by that point, the damage will have been done. The Fed's decision to double the quantity of dollars will have constituted a transfer of wealth from American consumers and importing firms into the pockets of American exporters. The debasement wouldn't have made Americans on net richer; it simply would have rearranged wealth and distorted production decisions.

There is another danger with our hypothetical Fed decision: other central banks might just reciprocate. In our example above, the European Central Bank (ECB), upon hearing the Fed's announcement, could make a similar pledge to debase the euro. If the ECB officials picked their numbers just right, speculators would then enter the currency markets and push the euro back down to $1.

Yet this wouldn't return things to the way they were. On the contrary, there would now be twice as many dollars, and twice as many euros, as before — even though the same physical quantity of wheat would be harvested.1 Therefore the nominal price of wheat would be permanently higher, quoted in either currency. Using our numbers, after the ECB announcement, speculators would push wheat down from $8 to (say) $6 per bushel and up from €4 to €6. Recall that this is higher than the original prices of $5 and €5 for a bushel of wheat.

When governments try to confer an advantage to their exporters through currency depreciation, they risk a war of debasement. In such a race to the bottom, none of the participants can gain a lasting competitive edge. The lasting result is simply weaker and weaker currencies against all goods and services — meaning higher and higher prices. Inflationary policies do not confer lasting advantages but instead make it more difficult to plan for the future. Stop-and-go inflationary policies actually reduce the benefits of using money in the first place.