The Conservative Movement and the Libertarian Remnant 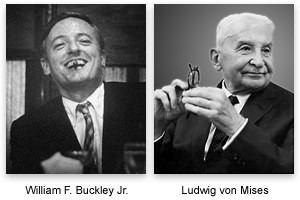 Tags U.S. HistoryHistory of the Austrian School of Economics

[Excerpted from Mises: The Last Knight of Liberalism (2007)]

By the mid-1950s, The Freeman had accomplished its goal of rallying the disparate libertarian forces — "the Remnant" as Albert Jay Nock would call them. Yet its financial and organizational difficulties had opened the gates for another nonleftist periodical, which would consolidate the forces on the American Right from a far less libertarian point of view than The Freeman.

National Review burst onto the American scene in the fall of 1955. Its driving force was the young editor-in-chief, William F. Buckley, Jr., a Yale graduate with a strong anticommunist pedigree: during his studies, he had gathered information on professors and fellow students for the FBI.[1] Buckley absorbed the editorial talent that was unable to find a home at The Freeman, in particular, Suzanne LaFollette and William Henry Chamberlin, but also such men as Russell Kirk, Frank Meyer, Max Eastman, and Erik von Kuehnelt-Leddihn.

When Buckley announced National Review as "frankly, conservative,"[2] old-world men such as Mises must have thought that, frankly, Buckley did not know what he was talking about. Mises did contribute a few pieces in the course of the first few years of National Review's existence. But on more than one occasion, he emphasized the difference between libertarianism and conservatism. In response to birthday greetings in 1957, he wrote: "Unfortunately this cannot be changed. I am a surviving contemporary of Karl Marx, Wilhelm I, and Horatio Alger, in short: a paleo-liberal [Paläo-liberaler]."[3]

In October 1954, Mises declined an invitation from Yale University to participate in a series called "Conservative Lectures," which was promoted with the promise that "each lecturer will work consciously toward restoration of … the power of the word conservative." He noted that the word "conservative" had no political roots in America and that in Europe it meant the very opposite of the principles for which America stood:

To conserve means to preserve what exists. It is an empty program, it is merely negative, rejecting any change. … To conserve what exists is in present-day America tantamount to preserving those laws and institutions that the New Deal and the Fair Deal have bequeathed to the nation.[4]

The sudden emergence of the word "conservative" highlighted a more general unease of the counterrevolutionary forces in the United States. They were quite sure what they were against: communism, fascism, socialism, the New Deal, the Fair Deal, etc. But what did they stand for? The fact is that even in the leadership of the new movement, economic knowledge and staunch libertarian convictions were rare. The recourse to words like conservatism reflected a widespread unease about adopting any clear positive message.

"When Buckley announced National Review as 'frankly, conservative,' old-world men such as Mises must have thought that, frankly, Buckley did not know what he was talking about."

It was easier to be evasive than to state clearly that at the center of the new movement's agenda stood the principle of private property. Other terms started floating around too, such as "limited government," "federalism," and "decentralization." When Mises emphasized in a paper the crucial importance of an independent judicial apparatus "that protects the individual and his property against any violator, whether king or common robber,"[5] the secretary of the Earhart Foundation wondered whether this might not be too radical. After all, judges in the United States were all appointed and paid by the government.

Mises replied that the American judges were independent insofar as they could not be removed or prosecuted even if their decisions were not palatable to the executive. In contrast, the insistence on limited government was at best useful "in the present-day American fight against the attempts to make the Government step by step totalitarian." Mises went on:

But there is no doubt that outside of this special field this term is meaningless as it does not indicate in what regard the government ought to be limited. Union bosses could, for instance, refer to this slogan to justify non-interference on the part of the government whenever strikers commit acts of violence, sabotage, etc.

It was therefore of vital importance that one advocate clearly the supremacy of private property and its offshoots: capitalism and the market economy. Insistence on federalism and decentralization would not do:

Decentralization on a federal basis gives in itself no guarantee that freedom will be preserved. Medieval feudalism had both decentralization and federalism; but only the lords were free (and tax-exempt); burghers and peasants had to endure legal disabilities, had no share in the government and had alone to pay taxes.[6]

By that time, at the latest, Mises must have outlived the optimism he had felt in the early days of The Freeman. He reverted to the pessimistic outlook that had become almost second nature. When his student George Reisman said he had the impression that the laissez-faire liberals were growing in numbers, Mises replied that this was the natural impression of a person who was still in the process of getting to know the other scattered individuals of the Remnant. Such a person might think there are ever more individuals to share his views, because he comes to know ever more such individuals. But Mises believed that the growth was only in personal acquaintance and not in absolute numbers. On another occasion, he commented that his writings were like the Dead Sea Scrolls that someone would find a thousand years from now.[7]

But pessimism did not prevent Mises from fighting the good fight, and from encouraging others to be strong in the battle of ideas. In a letter to Hayek, who had also vigorously rejected the label of "conservative," Mises wrote:

I completely agree with your rejection of conservatism. In his book Up from Liberalism, Buckley — as a person a fine and educated man — has clearly defined his standpoint: "Conservatism is the tacit acknowledgment that all that is finally important in human experience is behind us; that the crucial explorations have been undertaken and that it is given to man to know what are the great truths that emerged from them. Whatever is to come cannot outweigh the importance to man of what has gone before." (p. 154) Origines, Augustinus, and Thomas Aquinas have said the same thing in other words. It is a sad truth that this program is more attractive than everything that has been said about liberty and about the idealistic and materialistic benefits of the free economy.[8]

What were the reasons for this sad truth? Mises felt there was here an unexplored question. He went on: 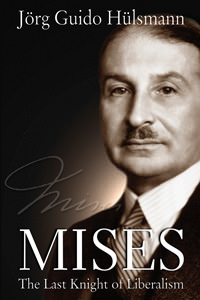 I assume that you, just as I, do not write to console yourself with the proverb: Dixi et salvavi animam meam [I have spoken and thus saved my soul]. Hence there is the question: How is it possible that the elite of our contemporaries is absolutely clueless vis-à-vis all these things? How does it come, for example, that the sugar price policy of the American government is hardly ever contested, even though out of 500 or 1,000 voters there is at most one who can expect advantages from an institutionally increased sugar price?

The problem I have in mind is not the behavior of the mass of "intellectuals" and of those who count themselves among the intellectuals. I mean those authors, both fiction and non-fiction, who for example speak about affluence and simultaneously about an over-population that brings mankind close to starvation. Or the Civil Liberties Union, which, on the one hand, moves heaven and earth when it finds that a tennis club admits Negroes to its courts only as guests, but denies them membership, but which declares on the other hand that it is no civil right to work without a union card.

This article is excerpted from Mises: The Last Knight of Liberalism (2007).