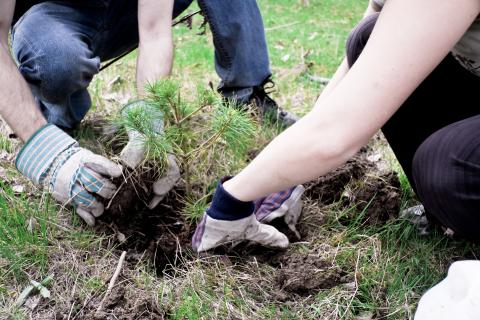 Individualists are often charged with neglecting the community. This is a variant of the charge that if you strive for profit, you are neglecting the useful or if you aim for the private interest, the public interest must not be of any concern to you.

The charge, however, is spurious and certainly unproven, except in a perverse sense. That sense is when some folks appoint themselves as the community –- or as speaking for the public or what seems to be of real use -– and find that people of an individualist bent of mind refuse to accept their self-designation as correct.

Consider how often people call some organization a "community" something or other–a community center, community action group, community newspaper, community playhouse, community recreation center, and so forth. Most absurdly, we've heard from many politicians recently claiming to speak on behalf of the "world community."

In nearly all such cases there is wishful thinking going on –- often, admittedly, of a benign sort. It is not that different from when organizations name themselves after the country or region in which they have been established -– the American Red Cross, the German fencing association, the Russian federation of chess players and so on. All this is nice but most of it is wrong.

A community newspaper is, well, a newspaper for some of the community, maybe for a very large portion of it, admittedly, but still just for some, not all, certainly not the whole. It is when this is forgotten that trouble starts.

The reason is that many of us attach great significance to things that are of the whole community. Not merely you and I but all of us! That's impressive. If some project is of or for us all, it carries an aura of sanctimoniousness. It is nearly sacred. It is democratic –- no, more than democratic, it is humanitarian because all of the humanity most of us can be aware of is included. This is our neighborhood, our fellows, our friends and relations. So how could you be at odds with what you are actually a part of?

So when you oppose some people's efforts to preserve something in the community for its alleged historical value are you opposed to the community? Surely not. But you will be charged with opposing your community's stand on the matter –- or on a proposed development or airport or wilderness or endangered species preservation. How could you be like that? You are going against your own, are you not? You are breaking ranks! You are a traitor!

But all this is a ruse or simply very confused. If those who identify themselves as speaking for the community simply announced that they, together, stand for something, well, then it would be the people speaking who stand for it; you may or may not agree.

If, however, instead of the community of such and such –- the South, the Serbian, German or French people, Orange County, the Midwest, the boat owners, apartment dwellers, school moms, and all the myriad of other groups wishing to be the voice or conscience of the community –- it were only some of the people in the community (as against or different from others), there would be nothing pejorative about where you stand, even if you are alone. It would be a matter of who is right and who would get their way or reach some compromise.

We have now a name for those who believe in the idea that communities have definite interests represented by some particular people in the community. They are called communitarians and among those who belong to this movement we may now count the probable Democratic Party presidential candidate, Al Gore. Hillary Rodham Clinton, too, seems to embrace the tenets of this social philosophy.

It means, essentially, that public policy must be directed toward benefiting communities, first and foremost. How do we learn what benefits communities? Well, that is a bit obscure, but most likely we will find that it is the communitarians who know best because, well, they care about communities more than those who do not embrace their stance do, especially individualists or libertarians.

We are, curiously, rarely members of just one community –- one that's, say, regionally distinguished. No, we have others, too, such as those we belong to because of our ethnic or national origins, or ones we joined when we bought a given make of car or when we took up a certain sport or recreation. We are members of many overlapping communities and rarely can anyone speak for any one, let alone all of them.

It is worth being very watchful so that we do not confuse people who are pressing their own goals, usually statist goals, as standing for the goals of the community and those who in fact have managed, rare as that might be, to find out just what does benefit the community. There are very few in this latter group, if for no other reason than that there are very few things that truly benefit every member of a community.

The American Founders thought that there really is just one such thing, namely, the protection of the unalienable rights of everyone to life, liberty and the pursuit of happiness. The rest of what folks are after usually concern some special group, but let's not confuse a handful of spokesmen with the community. Let's recall George Santayana, who warned us that "There is no greater stupidity or meanness than to take uniformity for an ideal."