GET NEWS AND ARTICLES IN YOUR INBOXPrint
A
A
Home | Mises Library | Commercial-Real-Estate Crush: The Next Crisis Not to Be Wasted?

Commercial-Real-Estate Crush: The Next Crisis Not to Be Wasted? As I walked home recently from a weekend trip to the grocery store, I passed a total of 13 vacant offices with signs saying "for lease" or "for sale." These spaces ranged from approximately 500 to 5,000 square feet according to their signs, and they are stretched along a main, commercial street in the center of Tucson, AZ. There is also an eight-screen movie theater that sits empty as well.

These empty commercial spaces span a very short stretch of road; less than three-quarters of a mile. The former places of business (mostly restaurants, ice cream shops, and coffee shops, along with a few real-estate offices) are empty now, and have been for quite some time.

Also recently, driving home from a shopping trip in the northwest section of Tucson, I traveled along a stretch of road for a distance of approximately two miles; I counted 21 vacancy, for lease, or for sale signs advertising commercial real estate ranging from 1,000 square feet up to 10,000 square feet. These spaces were mostly small to mid-size offices that used to house a plethora of financial-planning firms, real-estate and mortgage brokers, tax preparers, as well as the occasional ice-cream or coffee shop.

I found it intriguing that both in the central portion of Tucson and also in a further northwest section (towards the suburbs) of town, the commercial real estate "vacancy density" was about the same.

In the center of town, there were vacancies (mainly consisting of ~500 square foot up to ~5,000 square foot spaces) roughly every 250 feet on the road. This can be thought of as a "vacancy density" of roughly 20 square feet per foot of pavement.

In the more suburban area of town, although the vacancies were less dense on the road (one every 500 feet), the buildings for sale or lease were double in size. Again, the "vacancy density" works out to approximately 20 square feet per foot of pavement.

What does this made up "statistic" mean? Aside from providing the subject for a bit of writing fun on an evening after work, probably not a whole lot. But just imagine with me a frightening scenario:

What if I were an economic advisor in the current Obama administration? What if I were charged to provide statistical evidence supporting the conclusion that we are in the midst of the next crisis that can't "go to waste?" The first thing I would do is approach my supervisor and show him my new vacancy-density "statistical analysis."

I might do a similar study to prove that when the good times were rolling, this metric was down below 0.1 square feet per foot of pavement. Heck, everyone had a business then, and they were all booming. Based on what passes for proof and constitutes reason for sweeping reforms in the eyes of our leaders, I believe that would be enough to sell it. This is a truly scary thought to me. But I digress.

What I think this number really means is that some groups and individuals are losing a lot of money right now. The current news regarding the commercial-real-estate market in New York City can be taken as an indicator of the big-city result of "irrational exuberance" in commercial real estate; these short stretches of main streets in my town are strong evidence that the very same issue is coming to Everytown, USA.

In real terms, we can look at the Federal Reserve's own data showing the recent uptick in nonperforming commercial loans:

Combine this with the plummeting commercial-real-estate price index:

Many economists and analysts have written recently about the exposure of the banks to losses from commercial loans coming due in the next two to three years. Many of these loans will inevitably be written down as losses, since the property valuations no longer support the outstanding debts.

I shudder to think that there are government economic advisors, who at this very moment are detailing the commercial-real-estate issue to support President Obama's plan to provide the Federal Reserve with more supervisory and regulatory powers.

The threat of multiple trillion-dollar commercial-real-estate write downs is just the kind of crisis that the folks in our government and at the Federal Reserve need to help them rob the American citizenry. Just think of it: irrational exuberance funded by the Fed and soon to be backed by the full faith and credit of the US government.

If then–Treasury Secretary Henry Paulson and Federal Reserve Chairman Ben Bernanke could convince Congress to expose the taxpayers to several trillion dollars in the face of the residential-real-estate bubble and a handful of struggling (but too big to fail) companies, imagine the vast sums of currency Secretary Geithner may deem necessary to protect against this larger, looming crisis. Indeed, there is already evidence of the Federal Reserve team entering this game.

Given the ample, mounting evidence for looming catastrophe in the commercial markets, who knows — perhaps we will see an even more explicit organization for purchasing commercial-real-estate mortgages opened under the Federal Reserve's purview. The guarantees and funding for such an organization would need to be vastly greater than the already-gargantuan $1 trillion currently in place for the purchase of illiquid mortgage-backed securities. Further increases in the money supply, and further price inflation as the commercial lenders trade illiquid assets for new, loanable funds, will inevitably result. 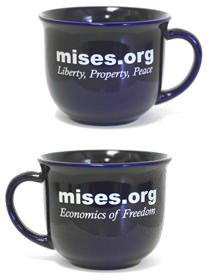 "Educate and inform the whole mass of the people. They are the only sure reliance for the preservation of our liberty."
– Thomas Jefferson, 1787

In spite of this rather shabby state of affairs, I still have hope. I suspect many who have the benefit of years spent studying sound money and free-market economics would say I'm overly optimistic, but I feel there is good reason for my hope.

More and more, I hear people talking about what is happening in the world rather than what happened on TV last night. I've been able to engage in thoughtful dialogue with young people in the university setting, and that is exciting given the apathy that has become so prevalent in our society.

In light of the recent multitude of chances for the population at large to be gently introduced to the shenanigans of our Federal Reserve System, I have hope that the lights may come on for enough people before it is too late. Who knows, maybe that light will shine the way back to liberty, property, and peace — and towards real change for the better in America.