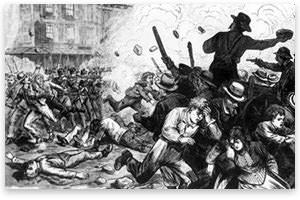 Even assuming that the unexplained incompatibility between the productive forces and the relations of production exists, why shouldn't this incompatibility continue forever? Why doesn't the economy simply lapse into permanent stagnation of the technological forces? This "contradiction," so to speak, was scarcely enough to generate Marx's goal of the inevitable proletarian communist revolution.

The answer that Marx supplies, the motor of the inevitable revolutions in history, is inherent class conflict, inherent struggles between economic classes. For, in addition to the property rights system, one of the consequences of the relations of production, as determined by the productive forces, is the "class structure" of society. For Marx, the fetters are invariably applied by the privileged "ruling classes," who somehow serve as surrogates for, or living embodiments of, the social relations of production and the legal property system. In contrast, another, inevitably "rising" economic class somehow embodies the oppressed, or fettered, technologies and modes of production. The "contradiction" between the fettered material productive forces and the fettering social relations of production thus becomes embodied in a determined class struggle between the "rising" and the "ruling" classes, which are bound, by the inevitable (material) dialectic of history to result in a triumphant revolution by the rising class. The successful revolution at last brings the relations of production and the material productive forces, or technological system, into harmony. All is then peaceful and harmonious until later, when further technological development gives rise to new "contradictions," new fetters, and a new class struggle to be won by the rising economic class. In that way, feudalism, determined by the hand mill, gives rise to middle classes when the steam mill develops, and the rising middle classes, the living surrogates of the steam mill, overthrow fetters imposed by the feudal landlord class. Thus, the material dialectic takes one socioeconomic system, say feudalism, and claims that it "gives rise" to its opposite, or "negation," and its inevitable replacement by "capitalism," which thus "negates" and transcends feudalism. And in the same way electricity (or whatever) will inevitably give rise to a proletarian revolution which will permit electricity to triumph over the fetters that capitalists place upon it.

It is difficult to state this position without rejecting it immediately as drivel. In addition to all the flaws in historical materialism we have seen above, there is no causal chain that links a technology to a class, or that permits economic classes to embody either technology or its "production relations" fetters. There is no proffered reason why such classes must, or even plausibly might, act as determined puppets for or against new technologies. Why must feudal landlords try to suppress the steam mill? Why can't feudal landlords invest in steam mills? And why can't capitalists cheerfully invest in electricity as they already have in steam? Indeed, they have in fact happily invested in electricity, and in all other successful and economical technologies (as well as bringing them about in the first place). Why are capitalists inevitably oppressed under feudalism, and why are the proletariat equally inevitably oppressed under capitalism? (On Marx's attempt to answer the latter question, see below.)

If, finally, class struggle and the material dialectic bring about an inevitable proletarian revolution, why does the dialectic, as Marx of course maintains, at that point come to an end? For crucial to Marxism, as to other millennial and apocalyptic creeds, is that the dialectic can by no means roll on forever. On the contrary, the chiliast, whether pre- or post-millennial, invariably sees the end of the dialectic, or the end of history, as imminent. Very soon, imminently, the third age, or the return of Jesus, or the Kingdom of God on earth, or the total self-knowledge of the man-God, will effectively put an end to history. Marx's atheist dialectic, too, envisioned the imminent proletarian revolution, which would, after the "raw communist" stage, bring about a "higher communism" or perhaps a "beyond communist" stage, which would be a classless society, a society of total equality, of no division of labor, a society without rulers. But since history is a "history of class struggles" for Marx, the ultimate communist stage would be the final one, so that, in effect, history would then come to an end.

Critics of Marx, from Bakunin to Machajski to Milovan Djilas, have of course pointed out, both prophetically and in retrospect, that the proletarian revolution, whichever its stage, would not eliminate classes, but, on the contrary, would set up a new ruling class and a new ruled. There would be no equality, but another inequality of power and inevitably of wealth: the oligarchic elite, the vanguard, as rulers, and the rest of society as the ruled.

In order to round out his system, Marx was interested in the dialectical workings of the past, the passages from oriental despotism or the "Asiatic mode of production" to the ancient world, thence to feudalism, and from feudalism to capitalism. But his main interest, understandably, was in demonstrating the precise mechanism by which capitalism was supposed to give way, imminently, to the proletarian revolution. After working out this broad system, the rest of Marx's life was largely devoted to demonstrating and developing these alleged mechanisms.