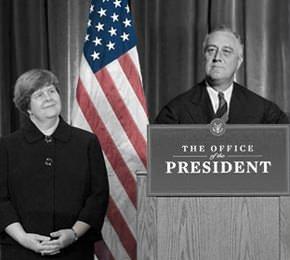 "Romer's historical account only makes sense if one has an a priori commitment to the remedial role of deficit spending."

Christina Romer, chair of the Council of Economic Advisers to President Obama, recently wrote an ode to Keynesian deficit spending as a method for curing severe recessions. Yet a simple glance at the big picture shows that the Keynesian story makes no sense.

Romer worries that President Obama will cave in to political pressures, and cut stimulus efforts before the economy has sufficiently healed. She alleges that this was the same mistake Roosevelt made after his initial (apparent) success in battling the Depression:

[T]he recovery in the four years after Franklin Roosevelt took office in 1933 was incredibly rapid. Annual real GDP growth averaged over 9%. Unemployment fell from 25% to 14%. The second world war aside, the United States has never experienced such sustained, rapid growth.

However, that growth was halted by a second severe downturn in 1937–38, when unemployment surged again to 19% … The fundamental cause of this second recession was an unfortunate, and largely inadvertent, switch to contractionary fiscal and monetary policy. [Spending cuts and tax hikes] reduced the deficit by roughly 2.5% of GDP, exerting significant contractionary pressure.

In the present article, I don't want to focus on Romer's claims about monetary policy. Instead I want to focus on her argument concerning deficit spending and the 1937–38 "depression within the Depression," because many prominent Keynesians consider it a bulletproof demonstration of the success of their recommendations.

Let's recap the Keynesian case: Herbert Hoover foolishly tried to balance the budget and that's why things got so awful; Krugman tells us we dare not repeat Hoover's mistake. Then, in the first three years of the New Deal, FDR ran large deficits and the economy improved tremendously. But alas, in 1937 FDR chickened out, and tried to balance the budget. This reversed some of the New Deal's gains, plunging the economy back into recession. The Depression was finally licked with the massive deficit spending of World War II.

At first, this Keynesian history sounds compelling. After all, it seems to explain two sharp turns in the unemployment rate. What more evidence do the "liquidationist" Austrians need to realize the error of their ways?

Yet, on closer examination, the Keynesian story falls apart. Romer's historical account only makes sense if one has an a priori commitment to the remedial role of deficit spending.

Fortunately, we can settle the debate fairly quickly; all of the relevant fiscal data are available in convenient form at this site. But before diving into the numbers, a few words on dating:

The federal budget deficit is measured according to fiscal years, which had different start dates back then. Fiscal Year (FY) 1929 ran from July 1, 1928, through June 30, 1929. In addition, at that time new presidents had to wait longer for their inaugurations. Hoover won the election in November, 1928, and was not sworn into office until March 4, 1929. At that point FY 1929 only had four months left to run, so Hoover obviously had little to do with it. That is why FY 1929 should be attributed to Calvin Coolidge.

In fact, the presidential historians at the site above go so far as to credit FY 1930 with Coolidge as well, but I think their method leads to some implausible classifications later on. I think it's most sensible to say that Hoover was responsible for FY 1930–1933, and that FY 1934 was the first one that we should associate with FDR and the New Deal.

Hoover's Deficits versus Roosevelt's: Talk about the Butterfly Effect!

In the first full year in which Hoover and Congress would have realized the country was in serious trouble, they boosted federal spending by a whopping 31 percent (from FY 1931 to FY 1932), and this occurred while tax receipts collapsed by 39 percent! Are these facts consistent with the picture of Hoover as a tight-fisted liquidationist that some modern Keynesians are painting?

Yet look at the relatively insignificant increase in deficits. In the rock-bottom FY 1933, the deficit was 4.5 percent of GDP. In the first three years of the New Deal — when Romer says the economy illustrated the success of (modest) Keynesianism — the deficit averaged 5.1 percent of GDP.

Isn't that a rather subtle result? Romer and the other Keynesians are claiming that the timid 4.5 percent deficit under Hoover, allowed the economy to sink into the worst Depression in US history, with monthly unemployment rates above 25 percent. Yet by bumping up the deficit's share of the economy by a mere 60 basis points, FDR was able to achieve the most spectacular turnaround in US history.

Can that be right? Do those numbers really make sense? I submit that there are other factors involved, and that focusing on the size of the government's budget deficit to explain economic growth, is about as useful as focusing on taco sales to explain Major League batting averages.

The "Problem" of the War's End

As we've seen above, Romer's account relies on an implausibly large sensitivity of the economy to deficits; going from a deficit of 4.5% of GDP to one of 5.1%, meant the difference between disaster and impressive recovery.

Yet even if Romer could come up with a fancy model to yield that result, she would then face the opposite problem: government spending and the deficit absolutely collapsed at the end of World War II, and yet the economy adjusted fairly quickly. Specifically, in FY 1945 the deficit was 21.5 percent of GDP. Yet two years later, the budget surplus was 1.7 percent of GDP!

Since a sixty-basis-point swing (over one year) meant such a big difference between Hoover and Roosevelt, one would think that the 2,320-basis-point swing (over two years) would make a much bigger difference between the economies under Roosevelt and Truman. Yet the postwar recession lasted a mere eight months, and the official unemployment rate for (calendar year) 1946 was — get ready — a whopping 3.9 percent.

The Keynesians have no leg to stand on. Let's suspend our disbelief and entertain the hypothesis that the way to help a depressed economy is for politicians to spend borrowed money. Even so, only the most convoluted story can tie the historical movements of federal deficits with the national unemployment rate. In her latest attempt, Christina Romer focuses on events of the 1930s and 1940s that support her theory, while ignoring the events that demonstrably refute it.