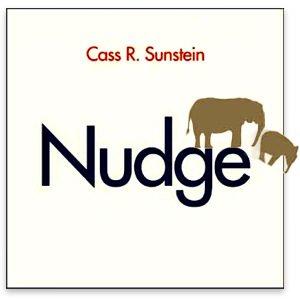 Cass Sunstein, who serves as "regulatory czar" in the Obama administration, seems to be well suited for his position. It appears that Mr. Sunstein wishes to regulate just about everything.

In Republic.com, his 2002 book, Sunstein suggested extending the fairness doctrine to the Internet. Sunstein then proposed allowing animals to sue humans for their rights, and more recently urged a ban on hunting throughout the United States. Having been on the job for only a few months, Sunstein may well come up with other eye-catching suggestions bound to please leftist radicals everywhere.

More insidious yet are the proposals included in Sunstein's best-selling 2008 book, Nudge (coauthored with Richard H. Thaler and published by Penguin Books). The central idea of this book, it would seem, is that the political elite have the right to decide what is best for the majority of Americans, whom Sunstein calls "somewhat mindless, passive decision makers" (p. 37).

As Sunstein would have it, the more-enlightened members of the intellectual class, with whom Obama has stocked his administration, know what is best for ordinary citizens. Since they know what is best for our health and happiness, we are obliged to submit to their far-fetched schemes for our betterment — schemes that often involve wealth redistribution and the enlargement of governmental powers.

To his credit, Sunstein is the first to admit that his attitudes are "paternalistic." With remarkable presumptuousness, he insists that those whom he calls "choice architects" (p. 11), of whom he is presumably one, have the right to design and limit choices for everyone else.

But what is it that confers the title of "choice architect" on Mr. Sunstein and his fellow left-leaning academics but not on others? If Sunstein is going to claim that title for himself and for those with whom he agrees on public policy, why can not any American claim it for himself? And if we are all choice architects trying to "influence people's behavior," how does that differ from what Americans have always done: expressing their opinions freely in speech and writing, talking politics at watering places, and casting their votes on election day?

As it turns out, Sunstein has a rather different idea of who is entitled to act as a choice architect. From the examples cited in Nudge, it would seem that only left-liberal academics, a great many of them social scientists or professors of law at universities associated with Barack Obama, have the right to choose the appropriate lifestyle for the rest of us. It does not seem to have occurred to Professor Sunstein that his fellow citizens, all 300 million of them, may treasure the liberty to live as they wish; nor that they may deeply resent the "nudges" that he and his fellow social scientists have dreamed up.

The fact is that what Sunstein calls a "nudge" is in most cases a good deal more than that. Whenever choices are structured by a centralized bureaucracy, as Sunstein appears to favor, human liberty has already been curtailed. Whenever government is entrusted with that much power, it is not long before all choice will be taken away.

"Whenever choices are structured by a centralized bureaucracy, as Sunstein appears to favor, human liberty has already been curtailed."

As Sunstein ominously suggests, "in some cases, forced choosing is best" (p. 250). Nudging is a step on the slippery slope toward a command-and-control government. It is not just the economy that Sunstein wishes to influence. It is an entire range of choices, from individual investing, school choice, organ donation, environmental regulation, and the "privatization" of marriage.

Perhaps Sunstein has never read 1984, or perhaps he has read it but failed to realize that Big Brother was not the hero of the novel. The fact that Sunstein is now a top advisor to the president of the United States is frightening, to say the least.

On the subject of school choice, for example, Sunstein believes in providing parents with more information about school performance. That is well enough, but what good will it do when Sunstein, and the administration of which he is a part, rejects the idea of school vouchers at every turn?

Sunstein praises experiments in which students have been given the right to attend schools outside their district. But he is oddly silent on supporting vouchers, even as he cites evidence showing that voucher programs and charter schools improve test scores (p. 202). Could it be that the choice architects are not entirely objective when it comes to matters that go against the largest supporters of the Democratic Party?

So it is on tort reform as well. Citing the costs, both direct and indirect, of medical malpractice suits on our healthcare system, Sunstein suggests a contractual remedy: patients may wish to give up the right to sue in exchange for lower costs. This is another far-fetched proposition that deflects attention from the real problem.

First of all, as Sunstein well knows, the courts have repeatedly ruled such contracts invalid. Secondly, most patients would find the legal complexity of such an arrangement off-putting, and for good reason. Barring a straightforward, standardized contract eliminating the right to sue that has received the blessing of a Supreme Court ruling, few of us would give up that right.

What is puzzling is that Sunstein has nothing to say about tort reform per se. Is this because trial lawyers are the single largest source of donations to the Democratic Party? The obvious solution to the problem of medical-malpractice costs, which has been put forward again and again by conservatives, is a national ban on excessive awards. It is remarkable how Sunstein's choice architecture breaks down when faced with the exigencies of Chicago-style politics.

"Perhaps Sunstein has never read 1984, or perhaps he has read it but failed to realize that Big Brother was not the hero of the novel."

The chilling fact about Sunstein's conception of behavioral economics is that it is to be applied to all aspects of private life, not just to "fixing" healthcare and social security (as if these fixes were not scary enough). For those who consume too many Big Macs, Sunstein has a plan to nudge them off of burgers and onto vegetables. For those whose waistlines are too large, he has a scheme to shame them into losing weight.

For those whose earnings seem a bit too high, he offers government campaigns to convince them to fork over a portion of their wages for the public good. Sunstein, as he admits, does "not share the view that all redistribution is illegitimate" (p. 245). We can be assured that his current employer agrees with him.

But why stop at income redistribution? Ideologues in other lands have extended the hand of government much farther, and it would appear that Sunstein wishes to do so here. One such proposal is that "states should abolish 'marriage' as such and rely on civil unions instead" (p. 228). The terms of such unions might be adjusted on an a la carte basis, with prenuptial agreements for all, on the expectation that one's marriage is likely to end in divorce.

Not only that, but the exasperating issue of the right of gay marriage could be made to disappear. The choice architects have already decided for the public on that issue, and with the elimination of marriage, the public would be denied the right to vote on it. What a clever idea! Eliminate marriage, and the "problem" of gay marriage just vanishes.

From the author's glib account, it appears that he has never considered whether most individuals might wish to preserve marriage. Similarly, he has not considered how passionately most Americans wish to choose what foods they consume, what sort of vehicle they drive, how much they pay in taxes, and where their children attend school.

In their arrogance and ignorance, the political elitists who now advise the president are on a collision course with the great heartland of America, and for their arrogance they will pay a price in 2010 and 2012. The "mindless, passive" public, is already enraged over the barrage of big-government schemes that have come out of Washington in the past nine months. If the proposals contained in Nudge are any indication, the public will have much more to be furious about before going to the polls in 2010.

Dr. Jeffrey J. Folks has taught in Europe, America, and Japan, most recently as professor of letters in the graduate school of Doshisha University, one of Japan’s leading private universities. His articles on American literature and culture have appeared in many journals, including Modern Age, Southern Literary Journal, and Papers on Language and Literature.