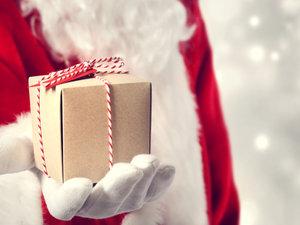 Halloween has a socialist tenor. Menacing figures arrive at your door uninvited, demand your property, and threaten to perform an unspecified "trick" if you don't fork over. That's the way the government works in a nutshell.

Thanksgiving has been reinterpreted as the white man, after burning, raping, and pillaging the noble Indian, trying to make amends with a cheap turkey dinner. New Year's can be ruined as the beginning of a new tax year, and the knowledge that the next five or six months will be spent working for the government.

That's why I love Christmas. To this day it remains a celebration of liberty and private life, as well as a much-needed break from the incessant politicization of modern life. It's the most pro-capitalist of all holidays because its temporal joys are based on private property, voluntary exchange, and mutual benefit.

In Christmas shopping, we find persistent reminders of charity programs that work and little sign of those (welfare bureaucracies) that don't. The Salvation Army, Goodwill dispensers in parking lots, and boxes filled with canned goods and toys are all elements of true charity. This giving is based on volition rather than coercion, which is the key to its success.

People complain about "commercialism," but all the buying and selling is directed toward meeting the needs of others. Even if the recipient doesn't give gifts in return, the giver still receives satisfaction. Absent entirely is the zero or negative-sum political process that tilts property in favor of one group or another.

Santa, unlike Halloween figures, comes to your home to bring gifts and goodwill, and never takes anything except milk and cookies. You wouldn't think of hiding your silver from him. Unlike government bureaucrats, Santa and his workers are entirely trustworthy, and even work overtime by creating goods that are desired by millions of people.

If the Labor Department or OSHA ever get around to investigating the North Pole, they'll probably find all sorts of labor violations: safety and health (too cold), unemployment insurance (does he pay it?), minimum wage (is there exploitation here?), overtime (Heaven knows they work long hours), civil rights (any non-elves employed?), and disability (is Santa accommodating these tiny men?). But the point is that everyone is there voluntarily, and no doubt considers it an honor and privilege.

Christmas trees are lovely to behold, and tree farms are the ultimate model for environmental policy. The trees are harvested and the ground replanted for future holidays, a process driven entirely by market demand. If this technique were transferred to our national parks and forests, we could satisfy timber demand, lower the price of wood, and make sure trees are always valued.

Christmas cards are an outlet for attractive art, communicated to the masses in ways the National Endowment for the Arts would never support. Card makers must satisfy actual consumers, who have better taste than NEA's program managers.

The downside of Christmas cards is that they have to travel to their destinations via the state postal monopoly. Every year the postal monopoly angrily warns its captive customers to mail their insignificant holiday letters two weeks in advance. If you're a postal bureaucrat, there's nothing more irritating than consumers mistaking your operation for a competitive one.

What do we do when it's time to send our most precious packages? We use private shipping services, which provide services at a profit even though they are prohibited by law from mailing letters. These companies welcome our business, and don't complain the rest of the year about the high volume.

At some point during Christmas, the official culture of government and the media — dominated by Obama and Pelosi and the goings-on in Washington — fades from view and we can't help but recall what's really important. It's family, community, home, tradition, and loved ones, and all the other things that government succeeds in crowding out during the rest of the year.

This year, let's remember to appreciate the role capitalist institutions play in making our holiday even more special. Not even the government can take away that Christmas spirit.