GET NEWS AND ARTICLES IN YOUR INBOXPrint
A
A
Home | Mises Library | Can the Fed Become Insolvent?

Can the Fed Become Insolvent? 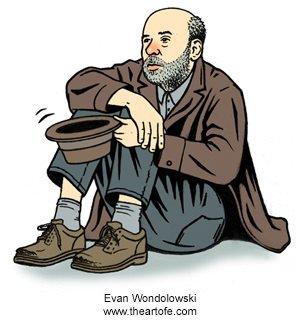 In light of Bernanke's plans to purchase $600 billion of longer-term government debt, many academic economists are beginning to worry: Could the Federal Reserve itself become insolvent? In this article I'll explain these fears and I'll argue that the Fed, with its printing press, cannot really go bankrupt the way other corporations can.

However, if the Fed should become insolvent from an accounting standpoint, more of the public would begin to realize just how nihilistic our central-bank, fiat-currency system really is. In that sense, further rounds of "quantitative easing"1 are risky indeed for the Fed.

To understand what's happening with the Federal Reserve in real life, it's easiest to work through a simplified example. Suppose that the following is a central bank's balance sheet:

On the left-hand side of the balance sheet are our hypothetical central bank's assets. Specifically, the bank holds $1 trillion (according to the present market valuation) of government bonds, which mature in one year. The yield to maturity on these bonds is currently 0.25 percent.

On the liabilities side, the central bank has three major items. First, there are $500 billion worth of green pieces of paper held by the public, in their wallets and purses, home safes, and bedside piggy banks.

It's important to realize that this last category of liability does not (currently) correspond to physical currency. The $250 billion that Acme Bank et al. have on deposit with the central bank consist entirely of electronic bookkeeping entries. Unlike Acme Bank — which needs to keep at least some paper currency "in reserve" in order to satisfy customer withdrawal requests — the central bank doesn't need to keep a stockpile of currency.

The reason is quite simple: The government's printing press is at the disposal of the central bank. If, say, Acme Bank decides it wants to bulk up on its holdings of paper currency, it can tell the central bank, "We would like to withdraw $1 billion from our account with you." In that case, the central bank will subtract $1 billion from the electronic record of Acme's balance and have the Bureau of Engraving and Printing fire up $1 billion in crisp new bills.

(In this simple scenario — where Acme withdrew $1 billion from its account — the central bank's liabilities would have changed, not in total amount, but merely in composition. Specifically, there would now be $151 billion in reserves held as paper currency in bank vaults, while there would only be $249 billion in electronic reserves on deposit with the central bank.)

Finally, note that the three liabilities only add up to $900 billion. Because the central bank's assets are $1 trillion, the remaining $100 billion is shareholders' equity. (It is important to remember that the Federal Reserve, though a creature of the government, is owned by private shareholders.) In terms of standard accounting, this hypothetical central bank is solvent; its assets exceed its liabilities.

A Round of Quantitative Easing

Now suppose that the head of our hypothetical central bank wants to kick start his economy out of a recession by expanding the balance sheet by $600 billion. Normally, he would engage in "open-market operations" and buy short-term government bonds in order to push down short-term interest rates.

Unfortunately for our pump primer, short-term rates are already at rock-bottom levels. Therefore the central banker decides to purchase bonds from his government that mature in ten (rather than one) years.

Here is the balance sheet, after the round of quantitative easing:

How did this process actually occur? It was quite simple. The central bank wrote checks, drawn on itself, in order to buy $600 billion worth of ten-year government securities from the secondary market.

When the bond dealers in the private sector deposit those new checks (drawn on the central bank) in their own checking accounts with Acme Bank and others, then Acme et al.'s account balances with the central bank rise accordingly. In the table above, I have shown the change: the central bank's liabilities in the form of electronic bank reserves now total $850 billion — rather than $250 billion.

At this point, the central bank's shareholders still have the same equity. But now their enterprise is more leveraged, because the ratio of liabilities to equity has grown from 9:1 to 15:1. In a sense — and this is a description that many economists have been using lately — the central bank has "borrowed short" in order to "lend long."

That is, the central bank has indirectly lent long-term money to the government (by buying its ten-year bonds) by borrowing very "short-term" money from the banking system/public.2

Whatever the alleged benefits of our hypothetical $600 billion asset purchase, it undeniably puts the central bank at greater risk.

Suppose that price inflation begins rising in our hypothetical world, so that one-year interest rates rise to 1 percent, while ten-year yields jump to 8 percent. This makes the current market value of the central bank's bond portfolio crash. Now the balance sheet looks like this:

As the table illustrates, the spike in interest rates causes the central bank to lose $7 billion on its short-term assets, but a whopping $245 billion on its long-term bonds. Because it recklessly exposed itself to greater interest-rate risk, our hypothetical central bank is now technically insolvent. That is, its liabilities exceed its assets by some $152 billion.

Although our central bank appears to be insolvent, in practice what would hinder its continued operation? Its liabilities consist in the legal-tender fiat money of the land. If someone walks into a branch of the central bank, hands over a $20 bill, and says, "I want to redeem this!" the teller can calmly reply, "Do you want that as two $10 bills, or four $5 bills?"

Things are more complicated for a small central bank that has liabilities denominated in other currencies. But for the case of the Federal Reserve — with dollar-denominated liabilities — it is hard to see what actual constraints it would face, should its accountants suddenly announce its insolvency. Even if there is a "run on the Fed," where all of the commercial banks want to withdraw their electronic reserves on the same day, the central bankers need not panic: they can order the Treasury to run the printing press in order to swap paper currency for electronic checkbook entries. (This is a neat trick unavailable to the mere commercial bankers.)

However, if the central bank were to actually become insolvent, it would be quite scandalous. The government would probably have to "seize it," lest the public realize that the whole scheme was a giant, legalized counterfeiting operation.

In my opinion, this is the bankers' main concern at the moment. They surely don't like thousands of economists blogging away on the possibility of the Fed going bankrupt, because that gets more and more people thinking through the logic of our crazy banking system.

For those interested in an analysis of the actual Federal Reserve's balance sheet and its various interventions into asset markets since the financial crisis began, I will be offering a new Mises Academy course, "Anatomy of the Fed," in early January.

In the meantime, it will be interesting to watch the academic debate over "QE2" unfold. Although they are focused on the narrow question of solvency, economists and other analysts are slowly realizing that Bernanke's "exit strategy" could collapse if and when interest rates rise sharply.