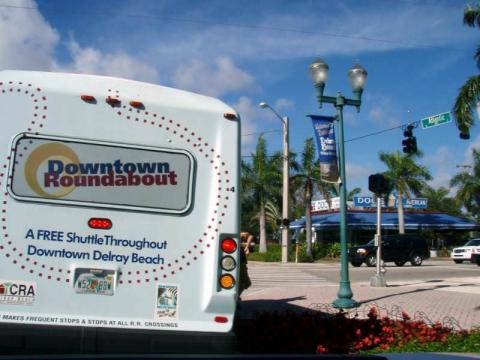 Last year, two young college graduates had a great business idea that has become a huge success in the beach town of Delray Beach, Florida. Observing the ordeal of vacationers lugging beach chairs and other heavy beach equipment for the long, hot walk to the beach, they introduced a free golf cart shuttle service called “The Downtowner.” They are on call until 11 p.m. every night and can take anyone anywhere in the downtown area. It was an idea that they developed while studying business in college, and their parents provided them with the capital for the golf carts. They live on tips and on advertising revenue from local merchants who advertise on the vehicles.

The Downtowner is always fully booked and for good reason; the young drivers are prompt, exceptionally polite and courteous, and it’s free! What a great way to start your post-college career as an entrepreneur. Not surprisingly, the city government of Delray Beach is apparently doing everything it can to drive The Downtowner out of business.

The Downtowner may soon be history, and the young entrepreneurs unemployed, because in its never-ending quest to provide corporate welfare for politically-connected downtown merchants, the city government spent over $1 million to purchase two large buses called “Roundabouts” that run a fixed route and operate for “free.” Of course, it’s not really free — the cost is just hidden from view; all salaries and capital costs are paid for by taxpayers. Since it is difficult, if not impossible, for anyone to compete with a government enterprise that has all of its capital and personnel costs paid for by the taxpayers, the days of The Downtowner may be limited. At least it hasn’t been banned altogether — yet. That was the fate of early-twentieth-century “jitneys” (fixed-route taxis) that were legally banned all throughout the U.S. with the advent of city government-run buses.

The Delray Beach city government claimed that the purpose of the “Roundabouts” is to stimulate local business and reduce traffic congestion. It is an example of a “bootleggers and Baptists” coalition, in other words. Economist Bruce Yandle coined the phrase to describe the proponents of alcohol prohibition in the 1920s: Bootleggers wanted prohibition because it kept them in business, and “Baptists” represented people who opposed alcohol consumption for religious reasons. In this case the “bootleggers” are local merchants who think government-subsidized bus service will bring them more business; the “Baptists” are environmentalists and urban planners who think the buses will reduce traffic congestion and air pollution.

But politicians have no business taxing one group of citizens — taxpayers — in order to provide a veiled form of corporate welfare to other, better politically-connected citizens — downtown merchants. Moreover, the buses create more traffic congestion, not less, because of their very existence. The Downtowner already reduced traffic congestion. If there is a need for more competition — and there always is — then that is the job of other private-sector entrepreneurs, not politicians looking to line their campaign coffers with “contributions” from local merchants.

The law of unintended consequences recently added an element of farce to the saga of the Delray Beach “Roundabouts.” It seems that they have being running empty most of the day and night except for a group of homeless people who have decided that sitting in an air-conditioned bus all afternoon is better than being out on the street in the middle of the summer in South Florida. This has caused a panic among the city’s political dispensers of corporate welfare because the homeless people are apparently deterring others from using the Roundabouts, the ostensible reason for the million dollar boondoggle in the first place. The politicians are afraid that city taxpayers might start questioning the propriety of using tax dollars to run empty buses (except for one or two homeless persons) back and forth through town all day and night, so they are proposing to start charging $1 each way.

The best use for the Delray Beach Roundabouts would be to take them out to sea and dump them some place where they can form a reef and fish habitat. It will be good for the environment and good for (non-subsidized) business in the city.