GET NEWS AND ARTICLES IN YOUR INBOXPrint
A
A
Home | Mises Library | Biographer, Scholar, Friend: Mary Sennholz at 100 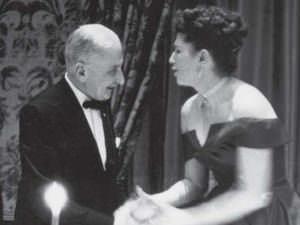 [Editor’s Note: Mary Sennholz, wife of Austrian economist Hans Sennholz and friend of Margit and Ludwig von Mises, recently spoke with Senior Fellow Jeffrey Herbener and Associated Scholar Shawn Ritenour about her long career as a writer and editor, and as a friend and colleague of many other giants of the Austrian School. The interview was recorded as part of the Mises Institute’s Oral History Project for release in 2014.]

Mary Sennholz has never been one to sit on the sidelines watching life pass her by. Although the decision to climb on board was not always in her hands. After being forced by a violent storm to land their private plane on a small, grass runway in the highlands of Colorado, her husband and pilot had made two unsuccessful attempts to take off in the heavy, wet grass. Before the third attempt, Hans had told Mary that if it failed, she and her luggage would have to be left behind to catch up with him and their young son, Robert, on the west coast where Hans, the important Austrian economist and student of Mises, was scheduled to deliver a lecture. As Mrs. Sennholz relates the story in her interview, the relief in her voice is palatable as she recounts the moment she felt the wheels become airborne.

Even before she met Hans, Mary Homan was living an interesting life. A few days after Pearl Harbor, she was hired to manage a pool of secretaries in the executive office of the president. She worked in that capacity for the administrations of both Franklin Roosevelt and Harry Truman. After the war, she was part of Adlai Stevenson’s committee of American officials in London working to establish the United Nations. She resigned in 1947 to join Leonard Read at the Foundation for Economic Education. Her admiration for the founder of FEE was clear. In the foreward to her biography, Leonard Read: Philosopher of Freedom, published in 1993, she wrote, “Leonard Read, the offspring of New England pioneers, was to become the leader who, at a crucial moment in American history, rallied the demoralized and tired forces of individual freedom and the private property order. This book is dedicated to his memory, which will live as long as the Foundation for Economic Education or one of its offshoots carries his message to anyone willing to listen.”

One of her duties at FEE was to organize the seminars in which Ludwig von Mises and other luminaries would speak. In her work, she rubbed shoulders with Frank Chodorov, Baldy Harper, Henry Hazlitt, Israel Kirzner, Edmund Opitz, Gary North, Benjamin Rogge, and Murray Rothbard among others. The only unpleasant encounter she mentions in the interview was with Milton Friedman.

Like Read, however, Mises was more than a casual acquaintance. She faithfully attended his NYU seminar with her friend Bettina Bien. The fruits of the seminar were not merely intellectual for Mary. It was there that she became acquainted with her future husband. Margit von Mises played matchmaker for Leonard Read’s assistant and her husband’s Ph.D. student. What began as a contractual relationship, Miss Homan editing the manuscript that would become Dr. Sennholz’s dissertation, blossomed into a beautiful partnership.

The friendship between the Mises’s and the Sennholz’s lasted a lifetime. Margit became a devoted godmother to Mary and Hans’s son, Robert. The couples traveled together to Guatemala and Mexico. As Mary tells it, the calm, cerebral Lu found his complement on the lecture circuit in the passionate, inspiring Hans. Margit and Lu visited Grove City several times over the years. The most memorable was in June of 1957 when Hans arranged for Grove City College to award Mises an honorary doctorate degree at commencement. Hans and Mary hosted a post-commencement reception for Mises at their home.

In February 1956, the fruits of Mary’s labor in soliciting the 19 contributions for, and editing the resulting Festschrift volume for Mises, On Freedom and Free Enterprise, were born. After all the hard work, she took delight in playing host to Mises in March 1956 at a banquet in his honor held at the University Club in NYC.

In addition to Leonard Read and Ludwig von Mises, another luminary of the liberty movement whose life intertwined with that of the Sennholz’s was J. Howard Pew. He was a trustee of FEE and chairman of the board of trustees at Grove City College. Pew was responsible for Hans being hired as chairman of the department of economics at GCC. Mary entertained him as a guest at the Sennholz’s reception for Mises in June 1957. As with Leonard Read, her admiration led her to write a biography of Pew from material gathered by the Pew family, Faith and Freedom: The Journal of a Great American, published in 1975. In the acknowledgements, she wrote that writing the book, “has been much more than an enjoyable experience. For almost a year it has meant living with the thoughts and actions of a great man who, as was said of Saul, son of Kish, ‘From his shoulders and upward he was higher than any of the people.’”

FEE served as bookends for Mrs. Sennholz’s professional activity in the liberty movement: starting just after its founding in 1946 working with Read for nearly a decade and returning to work with her husband who served as president from 1992 to 1997. Her last book to date is a collection of The Freeman articles she edited, Faith of Our Fathers, published in 1997.

Mrs. Sennholz reached her 100th birthday on November 2, and it is the hope of many that for a third time she will be driven by her admiration to write a biography: one of her husband, Hans.