Beyond Is and Ought 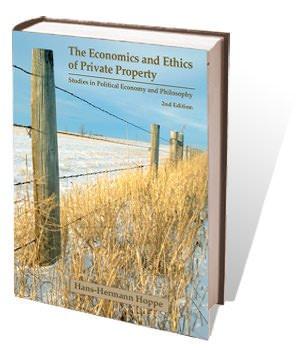 Prof. Hans Hoppe, a fairly recent immigrant from West Germany, has brought an enormous gift to the American libertarian movement. In a dazzling breakthrough for political philosophy in general and for libertarianism in particular, he has managed to transcend the famous is/ought, fact/value dichotomy that has plagued philosophy since the days of the scholastics, and that had brought modern libertarianism into a tiresome deadlock. Not only that: Hans Hoppe has managed to establish the case for anarchocapitalist, Lockean rights in an unprecedentedly hard-core manner, one that makes my own natural-law/natural-rights position seem almost wimpy in comparison.

In the modern libertarian movement, only the natural-rights libertarians have come to satisfyingly absolute libertarian conclusions. The different wings of "consequentialists" — whether emotivists, utilitarians, Stirnerites, or whatever — have tended to buckle at the seams. If, after all, one has to wait for consequences to make a firm decision, one can hardly adopt a consistent, hard-nosed stance for liberty and private property in every conceivable case.

Hans Hoppe was schooled in the modern (in his case, Kantian) philosophic tradition, rather than in natural law, acquiring a PhD in philosophy at the University of Frankfurt. He then moved to a dissertation in the philosophy of economics for his "second doctoral," or Habilitation degree. Here he became an ardent and devoted follower of Ludwig von Mises and his "praxeological" approach, as well as of the system of economic theory Mises built on this approach, which arrives at absolute conclusions derived logically from self-evident axioms.

Hans has proven to be a remarkably productive and creative praxeologist, partly because he is the only praxeologist (as far as I know) who arrived at the doctrine originally from philosophy rather than from economics. He therefore brings to the task special philosophic credentials.

Hoppe's most important breakthrough has been to start from standard praxeological axioms (e.g., that every human being acts, that is, employs means to arrive at goals), and, remarkably, to arrive at a hard-nosed anarcho-Lockean political ethic. For over 30 years I have been preaching to the economics profession that this cannot be done: that economists cannot arrive at any policy conclusions (e.g., that government should do X or should not do Y) strictly from value-free economics.

In order to come to a policy conclusion, I have long maintained, economists have to come up with some kind of ethical system. Note that all branches of modern "welfare economics" have attempted to do just that: to continue to be "scientific" and therefore value-free, and yet to make all sorts of cherished policy pronouncements (since most economists would like at some point to get beyond their mathematical models and draw politically relevant conclusions). Most economists would not be caught dead with an ethical system or principle, believing that this would detract from their "scientific" status.

And yet, remarkably and extraordinarily, Hans Hoppe has proven me wrong. He has done it: he has deduced an anarcho-Lockean rights ethic from self-evident axioms. Not only that: he has demonstrated that, just like the action axiom itself, it is impossible to deny or disagree with the anarcho-Lockean rights ethic without falling immediately into self-contradiction and self-refutation.

In other worlds, Hans Hoppe has brought to political ethics what Misesians are familiar with in praxeology and Aristotelian-Randians are familiar with in metaphysics: what we might call "hard-core axiomatics." It is self-contradictory and therefore self-refuting for anyone to deny the Misesian action axiom (that everyone acts), since the very attempt to deny it is itself an action. It is self-contradictory and therefore self-refuting to deny the Randian axiom of consciousness, since some consciousness has to be making this attempt at denial. For if someone cannot attempt to deny a proposition without employing it, he is not only caught in an inextricable self-contradiction; he is also granting to that proposition the status of an axiom.

Hoppe was a student of the famous neo-Marxist German philosopher Jurgen Habermas, and his approach to political ethics is based on the Habermas-Apel concept of the "ethics of argumentation." According to this theory, the very fact of making an argument, of trying to persuade a reader or listener, implies certain ethical precepts: e.g., recognizing valid points in an argument. In short, the fact/value dichotomy can be transcended: the search for facts logically implies that we adopt certain values or ethical principles.

Many libertarian theorists have recently gotten interested in this kind of ethics (e.g., the Belgian anarchist legal theorist Frank van Dun, and the British Popperian Jeremy Shearmur.) But theirs is a "soft" kind of argumentation ethics, for the question may always arise why one should want to keep an argument or dialogue going. Hoppe has gone way beyond this by developing a hard-core axiomatic, praxeological twist to the discussion.

Hoppe is interested, not so much in keeping the argument going, but in demonstrating that any argument whatsoever (including of course anti-anarcho-Lockean ones) must imply self-ownership of the body of both the arguer and the listeners, as well as a homesteading-of-property right so that the arguers and listeners will be alive to listen to the argument and carry it on.

In a sense, Hoppe's theory is similar to the fascinating Gewirth-Pilon argument, in which Gewirth and Pilon (the former a liberal, the latter a minarchist libertarian) attempted to say the following. The fact that X acts demonstrates that he is asserting that he has the right to such action (so far so good!) and that X is also implicitly conceding to everyone else the same right. That conclusion, though soul-satistfying to libertarians, and similar to praxeology in its stress on action, unfortunately didn't make it — for, as natural rights philosopher Henry Veatch pointed out in his critique of Gewirth: why should X grant anyone else's rights? By stressing self-contradiction in the arguments of non-anarcho-Lockeans, Hoppe has solved the age-old problem of generalizing an ethic for mankind.

Nevertheless, by coming out with a genuinely new theory (amazing in itself, considering the long history of political philosophy) Hoppe is in danger of offending all the intellectual vested interests of the libertarian camp. Utilitarians, who should be happy that value-freedom was preserved, will be appalled to find that Hoppean rights are even more absolutist and "dogmatic" than natural rights. Natural rightsers, while happy at the "dogmatism," will be unwilling to accept an ethics not grounded in the broad nature of things.

Randians will be particularly upset because the Hoppean system is grounded (as was the Misesian) on the Satanic Immanuel Kant and his "synthetic a priori." Randians might be mollified, however, to learn that Hoppe is influenced by a group of German Kantians (headed by mathematician Paul Lorenzen) who interpret Kant as a deeply realistic Aristotelian, in contrast to the idealist interpretation common in the United States.

As a natural rightser, I don't see any real contradiction here, or why one cannot hold to both the natural-rights and the Hoppean-rights ethic at the same time. Both rights ethics, after all, are grounded, like the realist version of Kantianism, in the nature of reality. Natural law, too, provides a personal and social ethic apart from libertarianism; this is an area that Hoppe is not concerned with.

A future research program for Hoppe and other libertarian philosophers would be (a) to see how far axiomatics can be extended into other spheres of ethics, or (b) to see if and how this axiomatic could be integrated into the standard natural-law approach. These questions provide fascinating philosophical opportunities. Hoppe has lifted the American movement out of decades of sterile debate and deadlock, and provided us a route for future development of the libertarian discipline.