[Editor's note: Bernanke has further loosened the Fed's monetary stance. As economist Frank Shostak explains, this action is based on a fundamental misunderstanding of how wealth is created and can only make things worse.]

On Wednesday December 12, 2012 Fed policy makers announced that they will boost their main stimulus tool by adding $45 billion of monthly Treasury purchases to an existing program to buy $40 billion of mortgage debt a month.

This decision is likely to boost the Fed’s balance sheet from the present $2.86 trillion to $4 trillion by the end of next year. Policy makers also announced that an almost zero interest rate policy will stay intact as long as the unemployment rate is above 6.5% and the rate of inflation doesn’t exceed the 2.5% figure.

Most commentators are of the view that Fed Chairman Ben Bernanke and his colleagues are absolutely committed to averting the mistakes of the Japanese in 1990’s and the US central bank during the Great Depression. On this Bernanke said that,

A return to broad based prosperity will require sustained improvement in the job market, which in turn requires stronger economic growth.

Furthermore he added that,

The Fed plans to maintain accommodation as long as needed to promote a stronger economic recovery in the context of price of stability.

But why should another expansion of the Fed’s balance sheet i.e. more money pumping, revive the economy? What is the logic behind this way of thinking?

Bernanke is of the view that monetary pumping, whilst price inflation remains subdued, is going to strengthen purchasing power in the hands of individuals.

Consequently, this will give a boost to consumer spending and via the famous Keynesian multiplier the rest of the economy will follow suit.

Bernanke, however, confuses here the means of exchange i.e. money, with the means of payments which are goods and services.

Printing more money is not going to bring prosperity i.e. more goods and services. Money as such produces nothing,

Money, per se, cannot be consumed and cannot be used directly as a producers' good in the productive process. Money per se is therefore unproductive; it is dead stock and produces nothing.2

Contrary to popular thinking there is no need for more money to keep the economy going. On this Mises argued,

The services which money renders can be neither improved nor repaired by changing the supply of money. … The quantity of money available in the whole economy is always sufficient to secure for everybody all that money does and can do.3

Printing more money will only result in the diversion of goods from those individuals that produced them to those who have produced nothing i.e. the holders of the newly printed money.

An essential point in the social philosophy of interventionism is the existence of an inexhaustible fund which can be squeezed forever. The whole system of interventionism collapses when this fountain is drained off: The Santa Claus principle liquidates itself.4

What is required to set in motion a broadly based prosperity is to enhance and expand the production structure of the economy. Printing money however, will undermine the expansion and the enhancement of the wealth generating infrastructure.

If by means of money printing and the lowering of interest rates one can generate prosperity, why after all of the massive pumping by the Fed are things not improving? The reply of Bernanke and his colleagues is that the pumping wasn’t aggressive enough.

If Bernanke’s way of thinking were to be implemented, it would run the risk of severely damaging the process of wealth generation and deepening economic impoverishment.

If money printing can create prosperity then why are all the poor nations still poor? These nations also have central banks and know well how to print money. A good recent example in this regard is Zimbabwe.

Even if we were to accept that the Fed ought to pump money to revive the economy, we would still have a problem if banks refused to channel the pumped money into the economy.

It must be realized that after being badly hurt in 2008, banks are likely to be reluctant to embark on aggressive lending of the money pumped by the Fed.

For the time being, banks still prefer to sit on the cash rather than lend it out aggressively. The latest data for the week ending December 12 indicates that the banks’ holding of excess cash increased by $25 billion from the end of November to $1.464 trillion.

We should be grateful to the banks for resisting aggressive lending so far - it has prevented an enormous economic disaster. Obviously if the Fed were to force the banks to push all the pumped money into the economy then this could inflict severe damage.

On Wednesday December 12, Fed policy makers announced that they will boost their main stimulus tool by adding $45 billion of monthly Treasury purchases to an existing program of buying $40 billion of mortgage debt per month. This decision is likely to lift the size of the Fed’s balance sheet from the present $2.86 trillion to $4 trillion by the end of next year.

The Fed Chairman Ben Bernanke, the initiator of this plan, is of the view that aggressive money pumping is going to strengthen US economic expansion. We hold that without the cooperation of banks, the massive pumping of the Fed is unlikely to enter the economy.

If banks were to push the money the Fed is going to pump into the economy, this would inflict serious damage on the economy’s ability to generate real wealth. 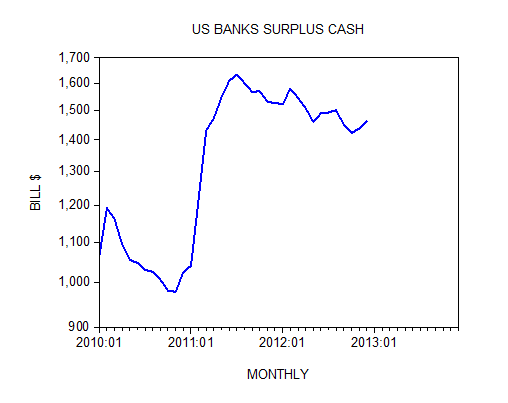