Benjamin Franklin Was All Wet on Economics 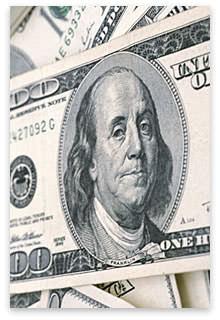 Benjamin Franklin is regarded by many to be one of the most influential of the founding fathers and a sort of "renaissance man"; an individual who delved into all aspects of knowledge and science. He is believed to have been the originator of such things as the lightning rod and wrote extensively on the moral arguments in favor of liberty.

Franklin was also a diplomat and often represented that United States republic internationally. Though Benjamin Franklin may have contributed much to various fields of science and knowledge, one branch he did lack in was economics.

Murray Rothbard left in one of his banking volumes an interesting footnote highlighting an essay written by Benjamin Franklin entitled A Modest Enquiry Into The Nature and Necessity of a Paper-Currency where Franklin offered interesting insights into the nature of money and interest rates. This essay has some remarkable similarities to the economic doctrine propounded by Keynes in the General Theory.

Franklin held a firm belief that all economic output is valued according to the amount of labor funneled into the production of that good. He believed that "trade in general being nothing else but the exchange of labour for labour, the value of all things is, as I have said before, most justly measured by labour."

In classical economics, the labor theory of value was widely accepted and many considered the value of a good to be determined by its costs of production. Franklin accepted this idea and expounded it.

The notion that the quantity of labor required to produce a given item directly affects the price of that good was brilliantly refuted by the father of the Austrian School of Economics, Carl Menger, in his Principles of Economics. Menger showed that the value of goods and services stem from the subjective tastes of all economic actors and not from the inputs of the production process.

The value of the factors of production are dependent on the value of the output, not vice-versa. If a vintage baseball card sells for $100,000 and a Mercedes-Benz sells for $30,000, does this indicate then that the card must have used more labor in its production than the automobile? Under the labor theory of value it would. But this is obviously incorrect. The baseball card is expensive not because the factors that created it are costly but because the subjective evaluations of individuals have bid the value of this good up to a certain degree.

Franklin also believed that gold and silver are used as money and are valuable because they are quite laboriously dug from the ground. Franklin writes, "the riches of a country are to be valued by the quantity of labour its inhabitants are able to purchase, and not by the quantity of silver and gold they possess."

In all reality, labor has nothing to do with the value placed on gold, silver, or any other factor on the market. Once again, value is determined by the subjective decisions of individuals bidding for certain goods or services on the market.

Benjamin Franklin also implied in A Modest Enquiry Into The Nature and Necessity of a Paper-Currency that a certain quantity of money exists that will optimize trade in a given region and that there could be overall shortages and surpluses of money in the market. Franklin also stated that a shortage of money could be the cause of a fall in trade and that excess money would be of no direct benefit to the economy.

Franklin writes, that "there is a certain proportionate quantity of money requisite to carry on the trade of a country freely and currently; more than which would be of no advantage in trade, and less, if much less, exceedingly detrimental to it."

these economists have not fully absorbed the great monetary lesson of classical economics: that the supply of money essentially does not matter. Money performs its function by being a medium of exchange; any change in its supply, therefore, will simply adjust itself in the purchasing power of the money unit, that is in the amount of other goods that money will be able to buy.[1]

As Rothbard explains, the value of money changes as the supply is manipulated; this fact is evident in the perpetual inflation that the United States dollar has experienced since the establishment of the Federal Reserve. The US dollar has substantially decreased in value and has, likewise, significantly risen in quantity issued.

Franklin goes on to state in his essay that high interest rates are harmful to the price of land in a given region because few individuals are willing to purchase land due to the incentive present in the loan markets. In addition, high interest rates at home could discourage international trade because fewer individuals will be purchasing goods from, or investing in, other countries. As individuals lend out their money to national industries, there will be less purchasing power active in international trade.

Benjamin Franklin argues the opposite concerning low interest rates on monetary loans. Franklin writes, that there is "exhorbitant interest, where money is suitably scarce … on the contrary, a plentiful currency will occasion Interest to be low."

Franklin argued that a primary determinant of the rate of interest is the quantity of money; that when money is scarce, the interest rate is high and when money is abundant, the interest rate is low. This is incorrect. What needs to be addressed is the purchasing power of money, not the quantity. When borrowers bid on a supply of loanable funds they may be requesting a certain quantity of money, but what they desire is the purchasing power of money; that is, all the goods that given quantity of money can purchase for their investment needs.

In addition, to claim that because region A has $1 million in circulation that its interest rate will be lower than in region B where $500,000 is in circulation is completely flawed. Differences in the rate of interest, as a result of the quantity of money, only appear when government issues new money directly into the loanable funds market by way of open market operations.

Even then, government is masking the newly issued currency at its current market purchasing power and not at its real purchasing power. Any difference in the interest rate of region A and B is derived from the time preferences of those individuals in the region when concerning the supply and demand schedules of loanable funds.

Franklin then states that the "want of money in a country reduces the price of that part of its produce which is used in trade: because trade being discouraged by it as above, there is a much less demand for that produce." What this excerpt implies is that because a certain quantity of money is lent out instead of being spent on consumption it will create a fall in demand for consumption goods resulting in a decrease in the price of those goods.

Franklin argues that this is a negative aspect of loan markets in that consumption is decreased by a rise in saving. This is one of the main premises in Keynesian thought, that markets are negatively affected by a positive change in the ratio of savings to consumption. What Franklin fails to realize in this essay is that although the price of consumers goods is falling, the price and quantity of capital are rising. This also shifts any resources and labor from consumers goods processes to capital production. An increase in present saving is what enables economic growth and a rise in future consumption to occur.

In addition, Benjamin Franklin attributes low investment to high interest rates and a reduction in employment, while low interest rates spur investment in all industries. He links both the existence of low and high investment, through the rate of interest, with changes in the quantity of money.

While it is true that low interest rates do cause increased investment, as the Austrian theory of the business cycle shows, not all investment is sustainable. Once investment surpasses genuine saving there is an imbalance between the two and market fluctuations will persist until this differential is settled. It must also be noted that an absolute quantity of money does not affect investment; what affects investment is the propensity to save and individuals refraining from consuming their entire income.

Another beneficial characteristic of low interest rates, Franklin writes, is an increase in the price of land due to a shift from lending money for investment into purchasing land. But it is incorrect to believe that investors are not willing to purchase land with their funds. There is nothing stopping individuals who have borrowed money from taking that purchasing power and obtaining land.

This often does not occur because the rise in the value of land seldom compensates for the interest the borrowers need to pay the lenders. This occurrence is simply a market mechanism that dictates that money lent out should be invested into production processes that will benefit the economy by receiving profit margins greater than the rate of interest.

Benjamin Franklin failed to see the connections between human action and economic activity as well as the source of market value.

Keynes's doctrine was anything but novel; the ideas Keynes propounded in the General Theory had previously been promoted by the mercantilists of the 17th and 18th century. Benjamin Franklin's view as to the nature of money and interest as well as the determinants of value was incorrect and it is this branch of flawed economic reasoning that would later give birth to the ideas present in Keynes's General Theory and the Keynesian paradigm. Franklin, through this essay, advocated the incorrect economic understandings that led to modern overspending, deficits, inflation, and manipulation of interest rates by the Federal Reserve System.

It goes to show that a person's heart can be in the right place but flawed thinking on economic fundamentals can lead him way off the mark — and into territory that is very dangerous for human liberty.