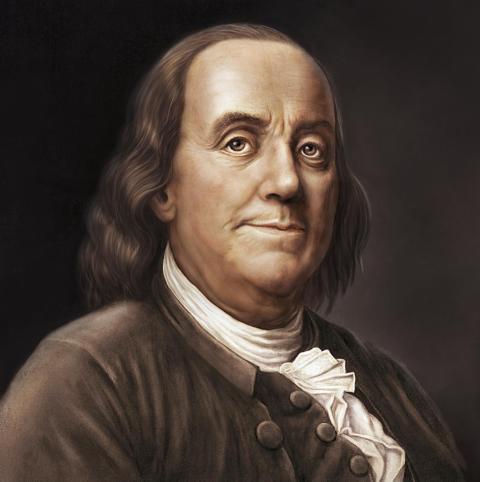 Americans remember Benjamin Franklin as one of our founding fathers. And well they should, as he was not just our most famous citizen at our country's birth, he was a central part of that birth.

As a member of the Second Continental Congress, Franklin helped draft the Declaration of Independence.  As a member of the Constitutional Convention, he helped draft the Constitution.  Both documents bear his signature.  He also signed the Treaty of Alliance with France, bringing the colonies French aid against the British, and The Treaty of Paris, which ended the Revolutionary War and recognized the independence of the United States. He was the only person, in fact, to sign all of these key documents.

Franklin's role in our founding has, however, been eclipsed in modern memory by his many other accomplishments.  He was a prolific inventor whose inventions ran the gamut from his trademark bifocals to the Franklin Stove to artificial fertilizer.  He ran his own paper and published Poor Richard's Almanac.  He even published the first political cartoon in the colonies. He founded the University of Pennsylvania, as well as America's  first public library and public hospital.  His discoveries went far beyond his famous kite experiment, and included the identification of lead poisoning and the discovery and charting of ocean currents.

Unfortunately, the result has been that attention which deserves to be paid to what Franklin said about America and the liberty it was designed to protect has often been crowded out by that paid to his other accomplishments.  It is worth remembering some of those inspirational words.

At the signing of the Declaration of Independence, Franklin reflected the risk and unity of purpose that led to America's founding when he said, "Gentlemen, we must now hang together, or we shall most assuredly hang separately."  But he also knew how uncertain was the maintenance of the vision of liberty which animated our founders.

Benjamin Franklin made clear the ultimate intended result of America's experiment in liberty, when he said, "God grant that not only the love of liberty but a thorough knowledge of the rights of man may pervade all the nations of the earth, so that a philosopher may set his foot anywhere on its surface and say: This is my country."  As we reflect on the political developments of the day, we should take a moment to reflect on how far we are from that goal, and ask how new life can be brought to  that ideal which America was intended to embody.