The Befuddling World of the Antieconomist 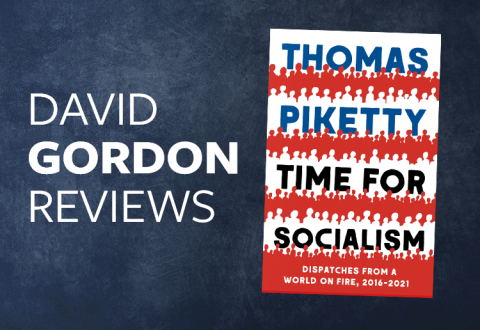 Thomas Piketty has written a useful book. Readers need no longer plough their way through his vast Capital in the Twenty-First Century, not to mention his even vaster Capital and Ideology, to understand his message. This fairly short book, which consists of his columns for the French newspaper Le Monde written between 2016 and 2020, along with an introductory essay, “Long Live Socialism!,” conveys the essence of his ideas. Not that reading this book is fun: Piketty clogs the book with charts and statistics and repeats his main ideas well beyond the point of utter boredom.

Before addressing this message, though, we need to look at his method. Austrian economists proceed by deduction from the concept of action and by doing so arrive at the laws of economics. Not so Piketty: for him there are no laws of economics. “There is no universal law of economics: There is only a multiplicity of historical experiences and imperfect data, which we have to examine patiently to endeavor to draw some provisional and uncertain lessons.” Piketty is a historicist or institutionalist, what Mises calls an “antieconomist.”

It’s bad to be an antieconomist, but if you are one you should get your facts and statistical data right. Suffice it to say that Piketty’s grasp of history does not inspire confidence. He says, “In the United States, it was not until the mid-1960s that the former slaves finally obtained the right to sit on the same buses as whites, to go to the same schools, and, at the same time, gained the right to vote.” Can he really be unaware that, after the 1870s, legal segregation and franchise restrictions were largely confined to the South? We also learn from him that “as far back as the 1870s, the Democratic Party had begun to reconstruct itself on the basis of an ideology which could be described as social-differentialist: it was violently inegalitarian and segregationist toward Black Americans but more egalitarian than the Republicans toward the white population (in particular the new immigrants from Italy and Ireland).” The influential Bourbon Democrats of that period were classical liberals, and serious debate about immigration restrictions got started after 1900. But who’s counting?

We haven’t yet reached the strangest of Piketty’s historical interpretations. “[B]etween 1929 and 1935,” he tells us, “the central banks were shaped by a liberal orthodoxy based on nonintervention and had allowed a wave of bank failures to take place. This precipitated the collapse of the economy, the explosion of unemployment, the rise of Nazism, and the road toward war.” Bank failures caused World War II—who knew?

I won’t discuss Piketty’s use of statistical data, but his blunders and bias have aroused widespread condemnation. One notable essay by Phillip Magness and Robert Murphy comes close to charging him with fraud and deception. (See my discussion of Jean- Philippe Delsol, Nicholas Lacaussin, and Emmanuel Martin’s Anti-Piketty: Capital for the 21st Century, in the Quarterly Journal of Austrian Economics 20, no. 4 [2017].) Piketty has responded to some of his critics, though not to Magness and Murphy, but a statement in this book suggests that he is less than surefooted with numbers. He says that there has been in the past decades some progress toward reducing global inequality, but much remains to be done: “The poorest 50% of the population is still the poorest 50% of the population.” I’ll leave this question as an exercise for the reader: Why is this vacuous remark not a tautology?

Piketty’s central idea is that inequality is the supreme social sin and must be radically curtailed. He doesn’t deny that capitalism results in economic growth and an enhanced standard of living, but the income and wealth of the rich have grown far faster than that of the poor. You might ask why this matters, even granting his dubious statistics: Don’t people care about how well they are doing, much more than they resent the rich, if in fact they resent them at all?

To ask a question like this is, for Piketty, to look at society from the wrong perspective. For him, equality trumps prosperity. If another of his proposals, “greening” the economy in order to reduce carbon emissions, is adopted, most people will need to live with a lower amount of material goods. But, projecting his own egalitarian commitments onto others, he thinks people will be willing to make the sacrifice so long as the rich have to pay their “fair” share of the costs. “[T]he considerable adjustment in lifestyles to deal with global warming will only be acceptable if a fair distribution of the effort is guaranteed. If the rich continue to pollute the planet with their SUVs and their yachts registered in Malta . . . then why should the poor accept the carbon tax, which is likely to be inevitable?”

Piketty often talks about democracy, but it would not occur to him to ask people whether they want to green the economy. Freedom of individual choice needs to be kept within strict limits, on this issue and on another vital issue as well. As even he cannot escape noticing, people around the world favor secession and decentralization. Local autonomy, Piketty thinks, has its place; but it must never be allowed to interfere with the power of the nation to impose income and wealth taxes. Otherwise, local regions might compete to attract investment by lowering tax rates, and we can’t have that, can we? Discussing a Spanish law that lets regions set the income tax rates for half the total tax base, he says that the system “challenges the very idea of solidarity within the country and comes down to playing the regions against one another, which is particularly problematic when the issue is one of income tax, as this is supposed to enable the reduction of inequalities between the richest and the poorest, over and above regional or professional identities.”

People should not be free to organize a business as they wish, even if they are starting it with their own money. The state should require them to share control of their company with workers, and they must install women and minority groups on their board of directors. “In addition to the fact that employee representatives should have 50% of the vote in all companies (including the smallest) it is conceivable that within the 50% of voting rights going to shareholders, the share held by an individual shareholder may not exceed a certain threshold in sufficiently large companies. . . . In order to . . . truly move against patriarchy, it is essential to put into place binding, verifiable, and sanctioned measures, both for positions of responsibilities in companies, administrations, and universities and in political assemblies. . . . The issue of gender discrimination must also be considered in relation to the fight against ethno-racial discrimination, particularly in terms of access to employment.”

Something Piketty says himself enables us to see a problem with these policies. He points out that donors to major universities do not get to control policy and suggests that investors in business can be treated the same way. “[T]he fact remains that this generous donor is in a more precarious position than a shareholder. There is no guarantee that the board of directors will renew him [in his seat on the board] indefinitely, and, above all, he can in no way threaten to pull out and withdraw his donation. His gift has been definitively incorporated into the endowment of the university; however, this has not prevented him from giving it.” If this is true, isn’t it also true that those who want to establish worker-controlled firms are free to do so and to invite investors to give them gifts? Why do we need the state to force all businesses to conform to this pattern? To Piketty, though, individual freedom would interfere with democratic solidarity, and to invoke the “sacrosanct mantra of the market and private property” is repellent.

Ludwig von Mises long ago pointed out the harmful effects of confiscatory taxation in the name of “equality.” As he says in Human Action: “A law that prohibits any individual from accumulating more than ten millions or from making more than one million a year restricts the activities of precisely those entrepreneurs who are most successful in filling the wants of consumers. If such a law had been enacted in the United States fifty years ago, many who are multimillionaires today would live in more modest circumstances. But all those new branches of industry which supply the masses with articles unheard of before would operate, if at all, on a much smaller scale, and their products would be beyond the reach of the common man. It is manifestly contrary to the interest of the consumers to prevent the most efficient entrepreneurs from expanding the sphere of their activities up to the limit to which the public approves of their conduct of business by buying their products.”

As Mises also notes, workers’ wages depend on their marginal productivity, and the best way to increase marginal productivity is to increase the amount of capital invested per worker. Confiscatory taxation, pursued in the name of what Mises calls a “spurious metaphysical doctrine,” interferes with capital accumulation and thus hurts workers. “The greater part of that portion of the higher incomes which is taxed away would have been used for the accumulation of additional capital. If the treasury employs the proceeds for current expenditure, the result is a drop in the amount of capital accumulation. . . . Thus the accumulation of new capital is slowed down. The realization of technological improvement is impaired; the quota of capital invested per worker employed is reduced; a check is placed upon the rise in the marginal productivity of labor and upon the concomitant rise in real wage rates.”

If you compare what Mises says with the remarks by Piketty I have quoted, you will see very clearly the difference between an economist and an antieconomist.