Bashing BP — When We Should Be Bashing the Corporatist State 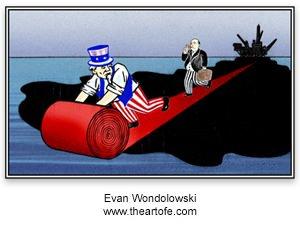 There has been tremendous criticism in the media of late regarding BP's response to the explosion and sinking of the Deepwater Horizon drilling rig and the subsequent spilling of millions of barrels of oil into the Gulf of Mexico.

An ABC news / Washington Post poll shows that 81 percent of those polled stated they thought unfavorably of the response by BP to the spill. The same poll shows that nearly two-thirds of those responding favor criminal charges against BP and other companies involved in the spill.

Although I am not one to condone negligence or malice, I have no intention of adding my voice to the chorus bashing BP. After all, they are one of many companies providing fuel for our cars, generating electricity to power our homes, and enabling so many aspects of our lives today. I could not readily type this short article, and expect to send it to an editor who will read it within a few hours and let me know whether he is interested, without companies like BP.

Instead, I want to illustrate that while BP is being bashed for the company-wide effort to contain its recent spill in the Gulf of Mexico (amidst cries for government to "DO SOMETHING!"), the spill is so difficult to deal with precisely because of government intervention in the marketplace.

Government Intervention: A Major Contributor to the Mess

After first hearing about the problem BP as a company currently faces, I became curious about the positions of oil platforms in the Gulf of Mexico. I am no expert, but drilling in over five thousand feet of water sounds hard. So, I searched for something to show me where the platforms are located and found the following map, which I find useful for discussion.

I've seen the total number of platforms estimated at around 4,000, with up to 100 drilling rigs operating at a time. One of the interesting things to me about this map is that it shows no rigs in the eastern part of the Gulf of Mexico. It turns out this is due to a moratorium on drilling first put in place by President Bush in 1990. In 1998, President Clinton extended the moratorium until 2012. So, one government intervention has resulted in a situation in which drilling operations are constrained west of the border between Alabama and Mississippi, with a concentration of drilling off the coast of Louisiana.

Another interesting thing I noticed is that there are many platforms that are a great distance from the shoreline — particularly off the Louisiana coast. Wondering why this is the case, I did some research and found one particularly compelling explanation.

In 1995, President Bill Clinton signed into law the Deepwater Royalty Relief Act (DWRRA), which was "intended to encourage natural-gas and oil development in the Gulf of Mexico in waters at least 200 meters (656 feet) deep by offering royalty relief on qualifying natural gas and oil lease sales." This act has since expired, but there remain continued incentives for drilling in deep water.

For example, a report from the DOE written in 2005 states that after the conditions of the DWRRA expired in 2000

the MMS adopted a program which determines royalty relief on a lease-specific basis. Under the revised method, leases located in the same water depth may have different volumes exempt from royalty charges if the economic conditions vary. For example, if one natural gas field is more expensive to access, then it may potentially receive more royalty relief than a field in the same water depth with lower costs to access.

In other words, the government specifically passed laws that gave the oil companies incentives to drill far offshore — that is, in deeper water where risk is presumably higher. In addition to the higher risk of accidents, the cost of solving any problems are necessarily greater in five thousand feet of water than in, say, 250 feet of water.

How much of an incentive was there to drill in deeper water? The same DOE report contains the following table.

It seems that it would have been downright foolish for a company to spend much effort drilling in shallow, more easily accessible regions nearer to the coastline, when by law there was a five-fold incentive for them to go out into deeper waters. Who could blame a company for trying to achieve a minimum relief volume, which would guarantee billions of dollars in royalty-free sales of petroleum and natural gas?

To see how this affected the amount of oil taken from deep waters, let's examine a second table from the same DOE report.

As is seen from this table, the production of crude oil in deep waters increased dramatically after the passage of the DWRRA in 1995. As of 2003, there was more than a 250 percent increase in the percentage of total oil produced in the deep-water regions of the gulf, with about 70 percent of all drilling taking place there.

It seems the DWRRA law was passed with precisely the intention of encouraging deep-water drilling, and it accomplished this goal. Unfortunately, accomplishing this goal led necessarily to higher risk and unintended consequences.

The problems caused by the current spilling of oil into the Gulf of Mexico will certainly have tremendous impact on the residents of the coastal states, on the fishermen, on the beaches and wildlife, and not least of all on BP as a company. There are some who think BP may end up in bankruptcy. In the meantime, it seems the company is doing quite a bit to make good on promises to clean up the problem and to take care of damages.

Stepping back from all this and taking a look from a free-market perspective, it is clear that the incentives put in place by the state — undoubtedly at the behest of lobbyists for oil companies — led to drilling in deep water, leading to increased risk. The incentives encouraged drilling in water that had been previously deemed economically unattractive by those same companies.

Additionally, a liability cap of $75 million for the oil companies was put in place by law. This is an incredible use of the control of the political means to make favorable dealings for oneself in the economy.1 In fact, it is the very definition of corporatism: First, individuals within a company work to get laws passed to reward companies for taking risks previously deemed unworthy of the time, energy, and capital expenditures. Then, those same individuals within the company work to get other laws passed to limit liability when things go wrong.

This oil spill is something that we in engineering and science refer to as a three-sigma event, in that it is a very low-percentage occurrence. In other words, Congress and big oil companies colluded to reward risky behavior and lost their bet. Comically, we now see Congress — who encouraged the risks — cry "foul!" They are demanding that the previously set damage cap be raised, retroactively, to another arbitrary figure deemed more appropriate for BP's sins: at present, $20 billion, although this may change in the near future.

Predictably, in response to the mess, there have been calls for more and tighter regulation on the industry. President Obama recently said he is interested in finding out who deserves punishment for the crime of the oil spill. (Maybe he can blame Congress?) Also predictably, there is scarcely a mention of the role of government intervention in the mess in any of the traditional state media. Instead, there is the standard demonizing of "unfettered capitalism" and the cries about the failure of the free market. Barely a mention is made that safety on drilling platforms has been under the purview of government regulators within the US Minerals Management Service and that the Deepwater Horizon was deemed a model for industry safety just last year.

In a free market, where BP would bear full responsibility for damages caused by its operations, there might not be such a mess to deal with in the gulf. Additionally, private insurers for BP would not have allowed for such a shoddy inspection record on the safety of a very complicated and difficult operation. Drilling far out in the ocean waters would likely have been pursued in some form, but with the companies bearing all the risk — and certainly not being rewarded for taking economically unsound actions — there would have been far less activity in deep waters.

Many people agitate for BP to hold true to its corporate line of moving "Beyond Petroleum" to alternative energy sources. The environmental disaster in the gulf will undoubtedly place further pressure on the company. Yet how can we ever know if that direction is feasible without freedom in the markets? True freedom would put the costs at the level that are truly indicative of risks and rewards involved with each activity.

For now, the vast majority of what we do in our lives is in one way or another dependent upon petroleum. With that in mind, we can only hope that the damage can be cleaned up quickly and that the coastal towns can move on to brighter days.