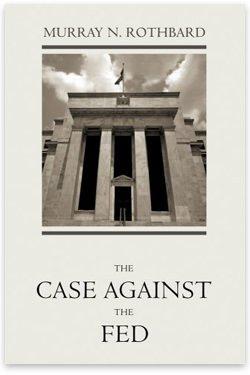 "If Rothbard is correct, the entire basis of modern deposit banking, the fractional-reserve system, is a type of counterfeiting that must be abolished."

Murray Rothbard begins this outstanding book by calling attention to a paradox. The Federal Reserve System enjoys virtual immunity from congressional investigation. The few who propose to subject the Fed to even minimal scrutiny, such as Henry Gonzales of Texas, at once find a consensus arrayed against them (pp. 1ff.). They threaten the stability of the market, since – it is alleged – only the Fed's independence blocks the onset of uncontrollable inflation.

Here lies the paradox. Inflation results from the infusion of new money into the economy, and it is the Fed that is responsible for its creation. "The culprit solely responsible for inflation, the Federal Reserve, is continually engaged in raising a hue-and-cry about 'inflation' for which virtually everyone else in society seems to be responsible" (p. 11). How did this odd situation come about?

As one would expect from a top-flight economist, Rothbard responds by tracing the problem to its roots. He briefly and clearly explains how money originated in a barter economy. Some commodities are much easier to market than others, and "[o]nce any particular commodity starts to be used as a medium, this very process has a spiraling or snowballing effect" (p. 13).

Soon, one or two commodities emerge into general use as a medium of exchange. And this, precisely, is money. Gold and silver have almost always been the commodities that win the competition for marketability. "Accordingly, every modern currency unit originated as a unit of weight of gold or silver" (p. 17).

Why has Rothbard gone to such pains to describe a historical process that seems very remote from the Fed? By beginning with a simple case, he can elucidate the basic mechanism that underlies the Fed's operation. To explain a complex event by starting with a simple method and gradually complicating it is a basic procedure of modern science. Galileo termed this "resoluto-compositive" method, and Descartes described it at length. Once one grasps how money has emerged, the key to understanding the mysteries of the Fed lies at hand.

We already can answer the following question; what is the optimum quantity of money? If one has understood the explanation of money's genesis, the answer is apparent. An increase in the supply of money does not increase real wealth, since money is used only in exchange. (The exception owing to nonmonetary uses of gold and silver can, for our purposes, be ignored.) "Any quantity of money in society is 'optimal'" (p. 20). And, to add one complication, the answer remains the same when paper money has been introduced.

A problem now arises for the analysis so far presented. If an increase in the supply of money does not increase real wealth, why have governments continually resorted to inflation?

Rothbard's response involves another fundamental insight of Austrian economics. Inflation does not affect everyone equally; quite the contrary, those who first obtain new money gain a great advantage, since they can purchase goods and services before most people become aware that the purchasing power of money has fallen. Inflation is thus a form of counterfeiting (pp. 27–9).

But it is not the only form; another type of counterfeiting arose out of deposit banking. Because of the inconvenience of carrying gold and silver, people often deposited the metals in banks, obtaining in return a receipt. These receipts, since they are promises to pay gold or silver, soon began to circulate as money substitutes.

However, a temptation presented itself to the bankers. The receipts normally did not specify particular gold or silver coins to be returned to the depositor; they were, rather, entitlements to specified amounts of the money commodity. (Rothbard notes that the great nineteenth-century economist W. S. Jevons warned against these "general deposit warrants" [p. 37]).

Since they need only return the amount of money specified in the receipt, bankers might give out more receipts than they had gold or silver on hand, trusting that not all depositors would demand redemption at the same time. For those willing to assume this risk, the prospect of vast profits called appealingly.

But is not this practice a blatant instance of fraud? So it would appear, and so Rothbard firmly avers that it is. Unfortunately, several nineteenth century British legal decisions held otherwise, and these verdicts were adopted by the American courts as well. Rothbard describes the legal situation with the sure hand of a master historian (pp. 42–4).

Our banker-counterfeiter, one might assume, can now proceed happily on his way to illicit fortune. But an obstacle confronts him; should he issue more receipts than he can redeem, the clients of other banks may ruin him through demands for payment that he cannot make good. The solution is obvious; by unifying the banks in a centralized system, this check to fraudulent wealth creation would be ended. Hence the movement for a central banking system, whose history in Britain and the United States Rothbard deftly summarizes.

The Federal Reserve System, as Rothbard makes crystal clear, was the culmination of efforts that continued throughout the nineteenth century to centralize banking.

By the 1890s, the leading Wall Street bankers were becoming disgruntled with their own creation, the National Banking System … while the banking system was partially centralized under their leadership, it was not centralized enough. (p. 79)

As he describes the movement to cartelize banking, Rothbard introduces a dominant theme in his interpretation of twentieth-century American history: the struggle of competing groups of bankers for power.

From the 1890s until World War II, much of American political history … can be interpreted not so much as 'Democrat' versus 'Republican' but as the interaction or conflict between the Morgans and their allies on the one hand, and the Rockefeller-Harriman-Kuhn, Loeb alliance on the other. (p. 92)

In the agitation to establish the Fed, the House of Morgan was in the ascendant; and Rothbard stresses the importance of the conference – under Morgan control – held at Jekyll Island, Georgia, in November 1910 (pp. 114ff). The entire section of the book (pp. 79–118) that deals with the origin of the Fed shows Rothbard's incredibly detailed historical knowledge. Though he was too modest to do so, he could had he wished have echoed the boast of Fustel de Coulanges: "It is not I who speak, but history who speaks through me."

Rothbard brings the historical section of the book to a close with a discussion of the Fed's early years in which the governor of the New York Fed, Benjamin Strong, guaranteed Morgan control (pp. 124–9). Only with the coming of the New Deal were the Morgan interests relegated to a lesser role, as the Rockefellers assumed leadership of the Eastern Establishment. Rothbard draws attention to the research of Thomas Ferguson, who has interpreted the New Deal as an anti-Morgan coup (p. 131n40).

"Philosophers have only interpreted the world; the point however is to change it." For once, Rothbard agreed with his ideological antipodes, Karl Marx; and the present work is not only an academic study but a plan for action. And the plan in question is a radical one.

If Rothbard is correct, the entire basis of modern deposit banking, the fractional-reserve system, is a type of counterfeiting that must be abolished. Under present arrangements, "the Fed has the well-nigh absolute power to determine the money supply if it so wishes" (p. 144). In response, the Federal Reserve System must be liquidated and the gold standard restored "at one stroke" (p. 146).

Again and again, the reader will be struck by the way in which Rothbard's grasp of fundamental economic principles enables him to overturn conventional thinking. A brilliant example of this is his unmasking of the fallacy involved in deposit insurance (pp. 134–7).

Wittgenstein says in his Tractatus, "Whatever can be said, can be said clearly," but few have been able to live up to his exacting dictum. Murray Rothbard's writing always displayed the clarity of a first-rate mind. Those who wish to see this mind in action, as well as learn from someone in total control of the literature of American economic history, should immediately secure a copy of The Case Against the Fed.

This review originally appeared in the Spring 1995 Mises Review.