Up with Bagus! | Mises Institute
Skip to main content

GET NEWS AND ARTICLES IN YOUR INBOXPrint
A
A
Home | Mises Library | Up with Bagus! 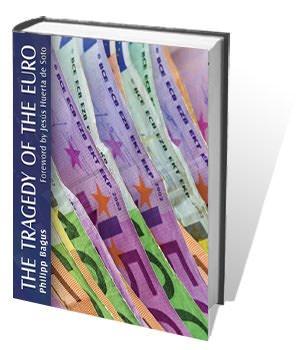 In this small gem of a book Professor Philipp Bagus of Universidad Rey Juan Carlos in Madrid has given us much more than an explanation of why the euro will fail the common man in Europe. He has given us a grand lesson in power politics and economic reality that is applicable throughout the world at all times and all places.

The title of his book frames his economic argument. A resource succumbs to the "tragedy of the commons" when property rights in the resource either are missing or not sufficiently enforced. All grab for as much of the resource as quickly as they can until the resource is plundered to extinction.

In this case, the euro is the resource that is being plundered by the European elite in its bid for centralized power and special privileges at the expense of the common European citizen. This plunder has played out against a background of great change in Europe. The vision of a united postwar Europe always meant two essentially different ideals: the liberal order (in the 19th-century meaning of the term) of free trade and free migration, which would leave the nation-states intact; and the statist ideal of a centralized European empire. The fall of the Soviet Union signaled the possibility that the liberal order would prevail following the brutality of 20th-century socialism of the German and Russian varieties. This beneficial development would have meant the end of special privileges for the European elite, who had waged a several-decades-long battle to hijack the post-World War II European project.

The Liberal Vision of Postwar Europe

The founders of modern, postwar Europe had one aim in mind — the prevention of war by removing the need for war. The two 20th-century European-initiated world wars had economic nationalism as their foundational cause. This process started during the so-called Progressive Era at the turn of the 19th to the 20th century and reached its zenith in the 1930s.

In the heart of Europe, with an advanced industrial economy manned by an industrious people, Germany was especially vulnerable to trade barriers. Its homegrown energy and food resources were inadequate to run its industrial economy and feed its dense population. As an illustration, Professor Bagus reminds us that the British naval blockade of Germany in World War I doomed 100,000 Germans to the cruelest death of all — starvation. With the demise of free trade in the early 1930s, Germany was haunted by the specter of a renewal of its immediate post-WWI fate of widespread famine.

When these conditions were combined with the destruction of the middle class during the 1923 hyperinflation, the German people were easy targets for a tyrannical regime that promised economic security at the expense of freedom. Eventually, Germany embarked on a campaign of conquest to secure lebensraum, or "living space," validating a dictum famously attributed to Bastiat: when goods do not cross borders, armies will.

It was this scenario that the European integrationists hoped to avoid through four main avenues — free movement of people, capital, goods, and services within Europe. This goal has been largely achieved and has made a war between any two European states almost unthinkable today. This goal does not require a centralized enforcement mechanism or regulatory bureaucracy in order to function. It especially does not require a common currency among its members.

The Centralizing Vision of Postwar Europe

Dr. Bagus adds much to our understanding of this process. He explains that the European elite in different countries forms a class that transcends borders; that is, the elite in France, for example, have more in common with the elite in Germany and Spain than they do with their own countrymen who are common citizens. So French bureaucratic elite ensures that property developers in Spain and exporters in Germany get the funds they need at a low price. This is one battle line.

Another battle line is composed along geographic boundaries. The Latin countries, with France as their leader, comprise a block that is less productive than the harder-working and more capital-intensive Nordic countries, with Germany as their leader. The goal of the Latin bloc is to institutionalize resource transfers from the north to the south. This is where the euro proves to be a stealth weapon, for outright capital transfers are easy to see and understand and thusly can be limited, whereas the machinations of a central bank are not.

The elite adds to this a propaganda campaign in which, just as in America, economists are "employed" to do research for the European Central Bank and, therefore, form a corrupt priestly class protecting the elite from honest criticism. It is shocking to learn the brazenness with which the European elite, which includes even the German courts, ignores or rationalizes away the treaty-born prohibitions that, supposedly, would prevent the European Central Bank from financing the sovereign debt of its members. This is a lesson: paper assurances mean nothing if the parties involved are dishonest and the citizenry is unwilling or unable to throw the rascals out.

Here is the heart of Professor Bagus's contribution to our understanding. By grounding his explanation in solid Austrian economic concepts, we learn that the European Monetary Union (EMU) is both a Trojan horse for economic tyranny and, what probably is not understood even by its proponents, an impossible vehicle to sustain; it simply will fail of its inherent contradictions. Put in the simplest terms, the euro will be plundered by the Latin bloc until inflation reaches unacceptable levels or until the Nordic bloc refuses to participate any longer and secedes from the European Monetary Union — and possibly from the European Union itself.

Perhaps I lead a sheltered life, but I found The Tragedy of the Euro to read like a great adventure novel. Here we have heroes (mostly postwar German bankers, resisting inflation) and villains (mostly postwar Frenchmen, allied with postwar German politicians, determined to keep the common German citizen paying and paying). The villains believe, falsely, that they can secure for all time their special privileges over the German citizenry — which is not the same as the German elite, who often collude with the French elite for their own privileges. But this is their great error, which Professor Bagus explains so clearly. They want to ignore the laws of economics by building coercive pan-European bureaucracies to enforce their will. But this will not work. How long it will last is the question.

The European financial crisis proceeds from day to day. This wonderful book will help everyone understand what is really happening and, we hope, provide a lesson for others. Are you listening, America?