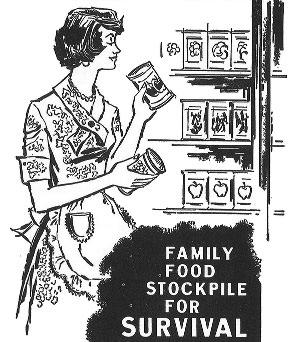 The clearer it had to become in the course of the war that the Central Powers were bound to be finally defeated in the war of starving out, the more energetically were references made from various sides to the necessity of preparing better for the next war. The economy would have to be reshaped in such a way that Germany would be capable of withstanding even a war of several years. It would have to be able to produce inside the country everything required for feeding its population and for equipping and arming its armies and fleets in order to be no longer dependent on foreign countries in this respect.

No long discussions are needed to show that this program cannot be carried out. It cannot be carried out because the German Reich is too densely populated for all foodstuffs needed by its population to be produced at home without use of foreign raw materials and because a number of raw materials needed for production of modern war material just do not exist in Germany. The theorists of the war economy commit a fallacy when they try to prove the possibility of an autarkic German economy by reference to the usability of substitute materials. One supposedly must not always use foreign products; there are domestic products scarcely inferior to foreign ones in quality and cheapness. For the German spirit, which has already famously distinguished itself in applied science, a great task arises here which it will solve splendidly. The efforts previously made in this field have led to favorable results. We are said already to be richer now than we were before, since we have learned how to exploit better than before materials that earlier were neglected or were used for less important purposes or not fully used.

The error in this line of thinking is obvious. It may well be true that applied science is far from yet having spoken the last word, that we may still count on improvements in technology that will be no less significant than the invention of the steam engine and of the electric motor. And it may happen that one or the other of these inventions will find the most favorable preconditions for its application precisely on German soil, that it will perhaps consist precisely in making useful a material that is abundantly available in Germany. But then the significance of this invention would lie precisely in shifting the locational circumstances of a branch of production, in making the productive conditions of a country that were previously to be regarded as less favorable more favorable under the given circumstances. Such shifts have often occurred in history and will occur again and again. We will hope that they occur in the future in such a way that Germany will become, to a higher degree than at present, a Country of more favorable conditions of production. If that should happen, then many burdens will be lifted from the German people.

Yet these changes in the relative pattern of conditions of production must be sharply distinguished from introducing the use of substitute materials and producing goods under worse conditions of production. One can of course use linen instead of cotton and wooden soles instead of leather soles. However, in the former case one has replaced a cheaper by a dearer material, that is, by one in whose production more costs must be incurred, and in the latter case a better by a less usable material. That means, however, that the meeting of needs becomes worse. That we use paper sacks instead of jute sacks and iron tires on vehicles instead of rubber tires, that we drink "war" coffee instead of real coffee, shows that we become poorer, not richer. And if we now carefully put to use garbage that we had earlier thrown away, then this makes us richer just as little as if we obtained copper by melting works of art. To be sure, living well is not the highest good; and there may be reasons for peoples as well as individuals to prefer a life of poverty to a life of luxury. But then let that be said openly without taking refuge in artificial theorems that try to make black out of white and white out of black; then let no one seek to obscure the clear case by allegedly economic arguments.2

It should not be disputed that war needs can beget and, in fact, have begotten many useful inventions. How much they represent a lasting enrichment of the German economy can be known only later.

Only those proponents of the idea of autarky who subordinate all other goals to the military one are thinking consistently. He who sees all values as realized only in the state and thinks of the state above all as a military organization always ready for war must demand of the economic policy of the future that it strive, pushing all other considerations aside, to organize the domestic economy for self-sufficiency in case of war. Regardless of the higher costs that thereby arise, production must be guided into the channels designated as most suitable by the economic general staff. If the standard of living of the population thereby suffers, well, in view of the high objective to be attained, that does not count at all. Not the standard of living is the greatest happiness of people, but fulfillment of duty.

But there is a grave error in this line of thinking also. Admittedly it is possible, if one disregards costs, to produce within the country everything necessary for waging war. But in war it is important not only that weapons and war material just be on hand but also that they be available in sufficient quantity and in best quality. A people that must produce them under more unfavorable condition of production, that is, with higher costs, will go into the field worse provisioned, equipped, and armed than its opponents. Of course, the inferiority of material supplies can to a certain extent be offset by the personal excellence of the combatants. But we have learned anew in this war that there is a limit beyond which all bravery and all sacrifice are of no use.

From recognition that efforts for autarky could not be carried through, there arose the plan for a future state stockpiling system. In preparation for the possible return of a war of starvation, the state must build up stockpiles of all important raw materials that cannot be produced at home. In that connection a large stock of grain was also thought of, and even stocks of fodder.3

From the economic standpoint, the realization of these proposals does not seem inconceivable. From the political standpoint, though, it is quite hopeless. It is scarcely to be assumed that other nations would calmly look on at the piling up of such war stocks in Germany and not, for their part, resort to countermeasures. To foil the whole plan, they indeed need only watch over the exports of the materials in question and each time permit the export only of such quantities as do not exceed the current demand.

What has quite incorrectly been called war economy is the economic preconditions for waging war. All waging of war is dependent on the state of the division of labor reached at the time. Autarkic economies can go to war against each other; the individual parts of a labor and trade community can do so, however only insofar as they are in a position to go back to autarky. For that reason, with the progress of the division of labor we see the number of wars and battles diminishing ever more and more. The spirit of industrialism, which is indefatigably active in the development of trade relations, undermines the warlike spirit. The great steps forward that the world economy made in the age of liberalism considerably narrowed the scope remaining for military actions. When those strata of the German people who had the deepest insight into the world economic interdependence of the individual national economies doubted whether it was still at all possible that a war could develop and, if that should happen at all, expected at most a war that would end quickly, they thereby showed better understanding of the realities of life than those who indulged in the delusion that even in the age of world trade one could practice the political and military principles of the Thirty Years' War.

When one examines the catchword about war economy for its content, it turns out that it contains nothing other than the demand to turn economic development back to a stage more favorable for waging war than the 1914 stage was. It is a question only of how far one should go in doing that. Should one go back only as far as to make warfare between great states possible, or should one try to make warfare possible between individual parts of a country and between city and countryside also? Should only Germany be put in a position to wage war against the entire remaining world, or should it also be made possible for Berlin to wage war against the rest of Germany?

Whoever on ethical grounds wants to maintain war permanently for its own sake as a feature of relations among peoples must clearly realize that this can happen only at the cost of the general welfare, since the economic development of the world would have to be turned back at least to the state of the year 1830 to realize this martial ideal even only to some extent.