Auditing the Fed Will Audit the State If Ron Paul succeeds in getting the Fed audited, the consequences could be far-reaching. Assuming the audit isn't rigged to protect the guilty, as a similar bill was in 1978, the Fed will need every obfuscating Keynesian to testify and write editorials on its behalf, to reassure the public that monetary matters really are best left to the gods who rule us, such as Ben Bernanke and Timothy Geithner. Monetarists, too, would likely join the "Save the Fed" crusade, perhaps arguing that even a great free market economist like Milton Friedman considered the Fed useful for preventing and curing recessions.

But the really appetizing part of auditing the Fed is knowing what stands behind it. The Fed is a racket at heart, a con game writ large — what else can you call an organization with the exclusive privilege of printing money in the trillions and handing it over to friends? But if this is true, what does that say about the state, the organization that created and sanctions it? Is the Fed an honest mistake in the state's otherwise undying efforts to preserve our liberty, or might it be a key component of a bigger racket?

Without the power of the state, there would be no proposal to audit the Fed because there would be no Fed to audit. Like any cartel, it exists to protect its members from market retribution, and only the police power of the state can make us shoulder that burden. A bill to audit the Fed could by force of logic become a state audit, much like the investigations of the 1972 Watergate burglary exposed the grinning skull behind the government's public persona. During a Fed audit, for example, would it not be reasonable to ask why the people's elected representatives continue to support a banking system that secretly steals wealth from their countrymen and other dollar holders? Or are we to take the naïve position that most elected officials really are clueless about the Fed's policy of currency debasement and the effects such policies have had in history?

There are any number of ways a Fed audit could bring the state itself under close scrutiny, but let us sketch just one line of argument:

Prior to passage of the Federal Reserve Act, Wisconsin Senator Robert LaFollette and Minnesota Congressman Charles Lindbergh Sr. delivered scathing speeches attacking "the money trust" for causing booms and busts. LaFollette charged that the entire country was controlled by just fifty men, a claim that a Morgan partner rejected as totally absurd. He knew firsthand the number was not more than eight.

Following Lindbergh's resolution, Congress created the Pujo Committee to investigate the big bankers, but the committee was firmly in the hands of the trust itself. During the summer of 1912, the committee scared the wits out of people with statistics and testimonies showing the power Wall Street had over the economy. To the public, Congress seemed to be doing its job by cracking down on corruption, though at no time were Lindbergh or LaFollette called to testify, nor did anyone seem to attach any significance to the fact that the biggest bankers were leading the charge for reform. 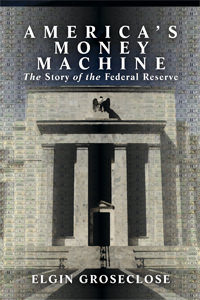 The committee concluded that banking reform was urgent and necessary to bring Wall Street under control, and a year later Congress and President Wilson gave the country a central bank as an early Christmas present.[5] As Rothbard notes, the composition of the first Federal Reserve Board more or less reflected the power structure of those present at the Fed's founding meeting at Jekyll Island in 1910, with Morgan man Benjamin Strong actually running the system as head of the New York Fed.[6]

Power grabs are a frequent and predictable outcome of government investigations. However, any audit that exposes the Fed's relationship to the state will be worth doing, even if the Fed's friends keep it where it is.

George Ford Smith is a former mainframe and PC programmer and technology instructor, the author of eight books including a novel about a renegade Fed chairman (Flight of the Barbarous Relic), a filmmaker (Do Not Consent), and an advocate of stateless market government.  He welcomes speaking engagements and can be reached at gfs543@icloud.com.