The Attempted Militarization of the Jetsons 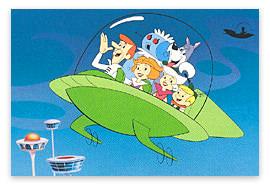 A lesser known episode of "The Jetsons" speaks directly to our current plight: the relentless but eternally floundering attempt to militarize a bourgeois society that is more interested in consumption and leisure than serving a mythical national ethos.

Let's first review the setting. The Jetsons is a cartoon made by Hanna-Barbera from 1962–1963 (the newer ones aren't as good but they aren't terrible either). It is distinguished in science-fiction lore by the fact that it is a rare attempt in this genre that actually succeeds in predicting the future.

In the Jetsons' world of the future, people are pretty much the same as they are today, except that they have more gizmos and far more leisure time. There are families, kids in school, teens in love, workers complaining about bosses, rock stars, and spouses assuming agreed-upon specializations. They love good food, so long as it is made very fast. They have pets. They shop. They are buffeted by fashion trends. They enjoy sports.

That's the future: it is an extension of today, just as today is an extension of everything that followed before. There is no dramatic hinge of history that causes all rules to change, as socialist or fascist or other totalitarian ideologies imagine. It is just the same old struggle playing itself out in different ways.

The entire setting of the Jetsons underscores another point that is lost on most every writer of this genre: technology does not change human nature or dramatically rearrange the meta-structure of limits and opportunities that form the basis of the social order. It doesn't rob us of free will or subject us to anonymous forces beyond our control or otherwise transform us all inside and out. Technology only makes what we want to do easier to do, and leads to a greater degree of flourishing.

If this point is so simple, why is it that so many geniuses have missed it?

The gizmos in the Jetsons, in particular, are a consequence of entrepreneurship, a vastly expanded division of labor—expanded by planets and galaxies—and a rivalrous capitalist economy engaged in free trade. There is no central planning. They use money. People are hired and fired. There is risk: inventions variously succeed and fail.

Spacely Sprockets and Cogswell Cogs make capital goods to sell to others who make other goods—a complex structure of production requiring the passage of time and markets. They compete with each other but also depend on each other, since Cogs require Sprockets to produce, while Sprockets require Cogs to produce.

The technology used in the Jetsons is nearly on target with current trends. Workers sit behind screens and punch buttons and complain about long days (2 hours, 3 days per week). The Jetsons foresaw the future of microtechnology, and so little things are always flying around, but the show did not foresee the microchip, so it was unclear to the makers of the show exactly what would cause things to zip here and there. We often see little machines with tailpipes and tiny clean gas fumes coming out.

The cars fly, which of course hasn't happened, but flight has become routine for the middle class. Travel is fast (but not magical, as in Star Trek). Food is fast. Construction is fast. Robots do most tasks that people once did, and so everyone is struggling to find exercise outlets. And yet people are not in a rush. The point of speed is to create more time for leisure. What a world!

Where is the state in the Jetsons? There are traffic cops who speak gruffly, and there are police who try to catch burglars. That's about it. Oh yes, there is a zoning board that sometimes makes trouble for real-estate developers. But for the most part, this is the ideal of the night-watchman state. How this world manages to restrain the state is never mentioned, but there is no talk of a Constitution or even a ruler at all, which provides something of a clue.

In the episode in question here—"G.I. Jetson"—this normally bourgeois society fueled by enterprise, technology, and the pursuit of leisure, comes to be dominated, in the smallest way, by a preposterous civic ritual: national service in the militarized Space Guard.

The episode opens with a nightmare in which George Jetson's boss, Mr. Spacely, has been transformed into a devil lording it over everyone in Hades. He is chasing George with a pitchfork. George wakes up and Jane Jetson asks what's wrong. George responds that perhaps he has been working too much. "Yesterday I worked 2 full hours," to which Jane responds: "What does he think he is running, a sweatshop?"

That very morning, a phone call comes in, and an official-sounding voice announces that George's number has come up. He has to leave immediately to go to train for the Space Guard, which requires some service from everyone from 18–80.

His destination is Camp Nebula, which, his boy Elroy points out is "10 million miles from the nearest asteroid."

George responds: "You know the Space Guard. Anywhere out of this world, they build a camp."

The belligerent voice continues, making unreasonable demands, insisting on a strict sense of discipline and exercise and 100% compliance, which everyone finds ridiculous and tedious.

After a ten minute space ride (everyone protests the grueling trip!), George arrives at Camp Nebula to find that Mr. Spacely turns out to be the commanding officer—and so the nightmare comes true.

His first order to everyone is: "Take the men to the indoctrination center!" And off they go. Spacely asks: "who wants to be the first to be indoctrinated?" Of course George is chosen. It begins with a buzz haircut, a medical exam, and an eye exam. Then comes the IQ exam, which George passes because he is able to put square pegs in square holes and round pegs in round holes.

The next person takes the same IQ test, and breaks the machine after trying to cram a square peg in a round hold. The robot machine in charge announces, "original thinking shows leadership potential" and tags him "officer material . . .  congratulations!"

Everyone gets stamped with a number, such as "US Approved 5106" and "US Approved 5107." There is some attempt to dehumanize them but it is really pointless since George's fellow reservists are mostly his fellow employees. They care more about each other than the mission or whatever it is they are supposed to be doing, for which they have nothing but a cynical disdain.

Uniblab demands that they all fly in formation, this way and that way, this way and that way. That's pretty much the whole drill: just the goofy middle-aged guys languidly letting their jet packs take them back and forth. After the drill is over, Uniblab tries to sell raffle tickets and later tries to get the soldiers involved in a game of blackjack. "Winner gets a desk job," says the robot, underscoring that petty corruption in the military can't be abolished by technology either.

The structure of the Space Guard is a hilarious thing to behold. It seems like nothing other than an inert hierarchy, where each person is permitted to humiliate the person below but must cower before the person right above. In fact, this seems to be the only business going on at all: yelling and denouncing down, and deferring and cowering up. The only real action taking place is that some people are promoted and others are demoted based on the extent to which they please the person up one notch. That's about it.

The episode ends with Jetson getting the best of Uniblab, which turns out to be a typical piece of government machinery (easily sabotaged and broken), and Mr. Spacely suffering at the hands of his superior, who in turn has a superior, who in turn has a superior. George returns home to a happy family having wasted a day or two in a pointless civic ritual.

The whole show is a wonderful commentary on how this consuming, spending, bourgeois, capitalist society is impervious to militarization. The state is seen as a pointless device for wasting time and money, something people will obey with their feet but will otherwise ignore with their hearts and minds.

The Jetsons won't be militarized and certainly won't be nationalized. But why? What seemed to be missing in the attempt to impart a militarized sense of civic loyalty was that crucial ingredient: An Enemy. Nowhere in the episode is a foe mentioned. There are no attackers. No retaliation is planned. In fact, there seem to be no security threats at all. The indoctrination center didn't even bother to pretend that there was a threat.

It is very likely that there were no threats in any case. But that hasn't usually stopped governments, which are known to either invent them or provoke them into existence in order to whip up the civic ideal of loyalty to the state apparatus.

It is possible that in the night-watchman world of the Jetsons, the government didn't have the means to propagate a threat. Or maybe the Jetsons' world is even more advanced than we've thought: the state doesn't bother with scaring people because it knows that no one would believe the propaganda in any case.

Some may criticize this cartoon for idealizing a society based on middle-class values, commerce, technology, petty human problem solving. But for anyone who loves freedom and human flourishing, the Jetsons' attachment to technology and domestic life are to be preferred to nationalist hysteria and the destruction of war. Perhaps the greatest triumph of this show is that it managed to make peaceful bourgeois living look as exciting in cartoons as it is in real life.