Artwork and the Subjective Theory of Value 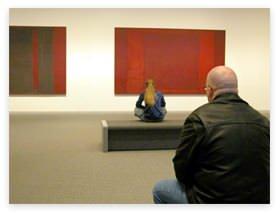 My sister was telling some friends and me that a pencil drawing of a dollar sign by Andy Warhol was in the market for about $18,000. One friend then said, "It is not like there is an inherent value in the work itself as it is a pencil drawing — Warhol needed a pencil and a piece of paper to produce it." Indeed, the value people attribute to works of art is a great example of the subjective theory of value at work.

According to the subjective theory of value, the value we place on goods and services is determined by the individual who is evaluating, and there is no intrinsic value as such in items themselves. In regard to works of art, we often hear people say they are "undervalued," "underappreciated," "hyped," or "overvalued." These are subjective evaluations and no one can measure by how much a work is "undervalued" or "hyped."

How well-known an artist is plays an important part in subjective valuation. Old works from centuries ago seem intrinsically valuable because of what they are. For instance El Greco's works from the sixteenth century are often highly regarded for his unique style of elongated figures. However they slid into obscurity for many years after his death until critics and art collectors brought his works to light again in the 19th century. Likewise, artists such as Vincent van Gogh suffered from poverty only to have their works highly regarded posthumously. It is a mistake to think that there is an intrinsic value to a van Gogh just because it is a van Gogh.

The rarity of works is another significant factor. In 2004, Young Woman Seated at the Virginals by Vermeer was sold at an auction for about $28.5 million despite a debate over the authenticity of the painting that lasted for decades. It was the first Vermeer to be auctioned in over eighty years and only 35 works by Vermeer are said to be in existence. These facts must have contributed to the collector's evaluation of the painting and he predicted he would derive satisfaction from owning that particular painting as opposed to not owning it, since he demonstrated the preference by being the highest bidder.

An individual's valuation may also depend greatly on who actually created a work. Serious collectors do not bid for a picture of a nice garden by Monet solely because they want a picture of a garden. If that was the case, a poster would be sufficient. In Leaf v International Galleries (1950) the plaintiff brought an action for rescission of a contract. The plaintiff purchased a painting called Salisbury Cathedral for £85 and the defendant, who sold the painting, honestly believed that it was a genuine Constable.

Five years after the purchase, the plaintiff realized that it was not by John Constable, and that it was a reproduction. He therefore wanted to return the painting and have his money back — the value that the plaintiff placed on the painting dropped once he realized who painted the work because the satisfaction he derived from it being a genuine Constable vanished. This case shows that a person's preference can change over time concerning the same good.

The case further demonstrates that it is wrong to think of value in terms of what labor has been put into a good. Forgers study original works of art extensively. A skillful forger would pay attention to every aspect of a painting that is to be copied. This requires a lot of time, effort, and talent, as well as materials. Yet once a work of art proves to be a copy, an individual's valuation changes. Furthermore, a simple work by a famous artist that is rather like an autograph, which takes seconds to produce, can be more valuable to some collectors than an oil paint by an unknown artist.

The medium used could also affect an individual's valuation. Printing techniques can produce vibrant and eye-catching works. Let us suppose that an artist makes a hundred editions of an identical image. I purchase one and hang it in the living room, which gives me great satisfaction. I then acquire two more of these to hang in the kitchen and the bathroom. These two additions do not give me the same sort of satisfaction as the first print because by then, I am already familiar with the image and the two I acquire later are extras.

As the principle of diminishing marginal utility tells us, the first print has satisfied the most urgent need — having the image at my place — and the further two prints are additions, which might even make me become tired of the image.

An artist does not often produce a hundred exact copies of an image using oil paint — even if they were painted, each one would be slightly different if manually done. Therefore a collector may attribute a greater value to an oil painting than to a print due to the relative abundance of prints.

It is important to note that the price paid for a work of art is not a measurement of the value attributed to it by the buyer in any way. It would be nonsensical to say that the Portrait of Adele Bloch-Bauer is eleven times more valuable than Summer Day based on prices paid for these works. Not only were they purchased by different people whose interests are divergent, but even if one person bought both paintings, one cannot say that the former gives eleven times more satisfaction than the latter.

If they satisfy their owners respectively, that is the end of the matter and no comparison can be made as to exactly how much each person appreciates the work. Beauty is in the eye of beholder and only an individual can make subjective valuation of a work of art based on the satisfaction that he derives from it. So which Mona Lisa do you prefer: Botero's, da Vinci's, or Duchamp's?