Two years ago, a few days after the victory of Cristina Fernandez de Kirchner in Argentina’s presidential election, the government decided to impose a new system of foreign exchange controls that the press called “the cepo.”

Initially started as an effort to crack down on tax evasion, it became clear later that the new measures were part of another exchange-market intervention by the central bank.

In a system of flexible exchange rates, the central bank limits its activities to controlling the money supply. Therefore, the price of foreign currency acts only as an indicator of the correctness or incorrectness of its monetary policy. Under a system of foreign exchange controls, however, the central bank rations foreign currencies by, for example, selling dollars at an arbitrary below-the-market-level price to some specific privileged groups.

In the specific case of the Argentine cepo, the central bank prohibits the purchase of dollars by people who want to save but allows importers or those who travel abroad to buy at the official rate, with strict controls over the amount delivered. In addition, it also sells dollars at official prices to those that use credit cards while abroad, although a tax charged increases the exchange rate by 20 percent.

The government justified imposing the cepo on Argentineans by claiming it was an effort to control dollar flows and to avoid devaluation. However, after two years, the exchange control has created more problems than solutions. For starters, a black market for dollars appeared where dollars are traded 65 percent above the official price (in line with the high inflation that deteriorates the purchasing power of the peso). These exchanges occur in what is known prosaically as the “blue dollar” market. In addition, international reserves are down more than 30 percent since October 2011, yet they are growing in the rest of the region due to the ultra-loose monetary policy of the Fed. Finally, the trade balance was reduced thanks to the collapse in the growth rate of exports. 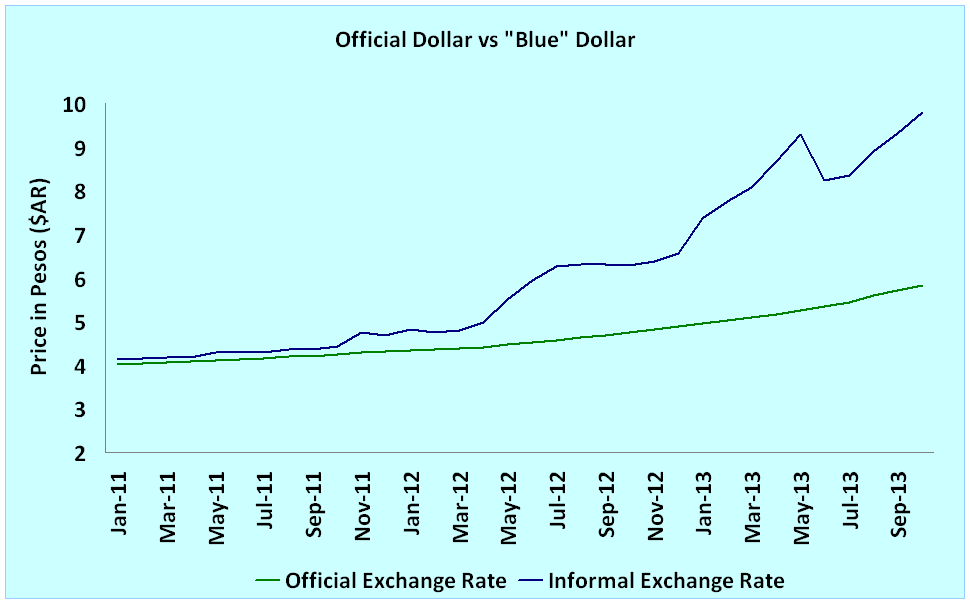 One might ask the real reason why the government decided to engage in a policy so detrimental to Argentine society. One possible answer is that the rulers worry only about their own short-term interests rather than thinking about the “common good.” Another, perhaps naïve, interpretation is that Argentine politicians forgot to read chapter XXI of Mises’s Human Action.

The Shortage of Foreign Exchange

Repeatedly, Argentine officials referred to the cepo as a vital tool to “look after the dollars” and avoid shortages of foreign currency needed for long-term investment. Now, if they had read Mises, they would know that, in a free market, there is no such thing as a currency shortage:

What those governments who complain about a scarcity of foreign exchange have in mind is however, something different. It is the unavoidable outcome of their policy of price fixing. It means that at the price arbitrarily fixed by the government demand exceeds supply.

The fall of $14 billion in central bank reserves can be explained with simple concepts such as demand and supply. At the official price, many people want to buy foreign currency, while very few are willing to sell. If a product is sold at a price that is below market price, it is very easy to predict that inventories will fall rapidly unless prices rise. With our foreign reserves, the principle is the same.

The Damage to Exports

Before the imposition of exchange controls, Argentine exports grew at an annual rate of 27 percent. However, the pace was reduced to only 3 percent by September 2013. Mises offered an explanation for why this crash would occur:

Every citizen who acquires — through exporting, for example — an amount of foreign exchange, is bound to sell it at the official rate to the office of foreign exchange control. If this provision, which is tantamount to an export duty, were to be effectively enforced, export trade would shrink greatly or cease altogether.

Through the central bank, the government pays exporters only 40 percent of the value of their goods sold abroad. If an exporter sells a product that costs $100, the central bank will pay him only $AR 600 once he cashes in the dollars earned from the sale. However, if the central bank respected the market price of the dollar, it should pay the exporter $AR 1000. It is not a surprise that exports were hit hard by the cepo.

During her speech at Harvard University, President Cristina Kirchner denied the existence of the cepo and, to illustrate her claim, she suggested that there were “120 items that allowed people to acquire dollars.” One of them, she claimed, is imports. This would not surprise Mises who wrote:

But, when an importer pays 6 for what he actually should pay 10, he is receiving a considerable government subsidy, which probably increase imports to the point of threatening the survival of the always exalted “domestic production.” This is something the government (especially an interventionist one like Argentina’s) is not willing to allow. Mises notes:

Thus the authority resorts to further makeshifts. It either raises import duties or levies special taxes on the importers or burdens their purchases of foreign exchange in some other way.

Had Mises mentioned another of the ill-conceived policies of the Kirchner regime, the Anticipated Affidavit for Imports (DJAI, a new bureaucratic obstacle for importers), we could refer to him as a futurologist.

Inflation Is the Problem

On a final note, the reason for exchange controls, just as the reason for the more traditional price controls, is the persistent price inflation generated by the central bank’s monetary policy which the government tries to ignore.

But as Mises also suggested, no further intervention can control or alter “the fact that a country's national currency has lost a part of its purchasing power against gold, foreign exchange, and commodities.”

Exchange controls add to the already existing problems. If the government had read Mises (or if it had not deliberately decided to ignore him) it should have taken the rise of the dollar as an indicator of the overflow of its inflationary policy. As a corollary, we would have avoided the distorting effects of a “cepo” and, moreover, we would have ended inflation, returning to the people the purchasing power of the local currency, which they honestly earned in the peaceful interaction of the market economy.