GET NEWS AND ARTICLES IN YOUR INBOXPrint
A
A
Home | Mises Library | Are Rich People Parasites? 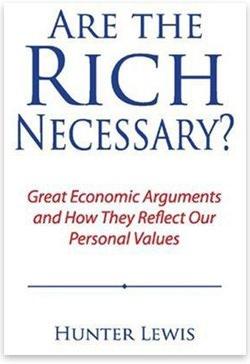 [Are the Rich Necessary? Great Economic Arguments and How They Reflect Our Personal Values. By Hunter Lewis. Axios Press, 2007. Viii + 277 pgs.]

Hunter Lewis's excellent book differs from nearly all other books on economics. Most books defend a particular point of view: a work by Duncan Foley, e.g., will be much more favorable to Marxism than one by Ludwig von Mises. Lewis instead presents the arguments both for and against the free market, allowing readers to judge for themselves.

Why does he do this? Not because he has no point of view of his own. Judging by the way he presents the arguments, I strongly suspect that he favors the free market; and at the end of the book, he does offer some policy suggestions. But he thinks that judgments about economic policy rest on premises about values that cannot be fully reconciled.

We cannot escape the problem these conflicting value judgments pose by throwing some of them overboard. They all have merit:

Indeed, I [Lewis] believe that if we take the trouble to look beneath the surface of clashing economic ideas, we will generally find ideals on all sides that are inspiring, and others that are at least worthy of respect. (p. 12)

As we shall see, Lewis has a creative proposal that he hopes will elicit agreement from proponents of the major value perspectives. But the battle over the free market occupies most of the book. As Lewis points out, a common attack on the free market indicts the rich as parasites. Is it not grossly unfair, e.g., that Bill Gates has billions of dollars, far in excess of what he needs to lead a life of luxury, while others must struggle for a pittance?

Precisely the excess that the opponents of the market protest against is a principal point in favor of the market. People wish to have more and better goods, and this goal can only be attained through investment on a massive scale. Investment, in turn, requires savings, and only the rich can save the large amounts needed:

The poor cannot be expected to save, because they need every dollar for basic needs such as food and shelter. Middle class people will save something for emergencies, children's education, or old age. But they have many immediate needs and desires, and in any case their savings will eventually be consumed, especially after retirement. The rich, however, are different. They have so much money that, in aggregate, they simply cannot spend it all. They are, in effect, forced to save. (p. 20)

The rich then, are necessary, at least if we want a prosperous society. But must one not say, on the other side, that the vast profits that some people get in a capitalist economy make goods more expensive for the poor? If profits were curtailed, would this not lower prices? Lewis notes in rebuttal that profit and loss guide producers to meet the demands of consumers. If a business makes a large profit, this indicates that consumers want more of the product, and entrepreneurs will shift resources to satisfy this demand. Losses indicate the contrary, and resources shift away from items that generate them.

But does this response answer the objection? Even if profits are indispensable signals for the market, do they not result in high prices that gouge the poor? Lewis quotes an unexpected witness to the contrary. In the Communist Manifesto, Marx pointed out that capitalism conquers through low prices:

The cheap prices of its commodities are the heavy artillery with which [the profit system] … compels all nations, on pain of extinction, to adopt the [profit] mode of production. (p. 50, quoting the Manifesto)

Even if profits are essential, though, why must they go to owners of firms? Why cannot workers manage their own affairs, retaining profits for themselves? Of course, in a market system, workers are free to organize firms in this way if they wish, but the objection rests on a false premise. In speaking of workers retaining profits, the objection ignores a fact that we have already discussed. Growth in a free economy depends on savings and investment. In a growing economy, the bulk of profits must be reinvested. The presupposition of the objection is that workers who owned a firm themselves would have the profits to spend, but this would derail growth.

Most importantly, if employees owned the entire economy, saving would plummet. As we have seen, it is the special role of the rich to be forced to save and invest — they alone have more than they can possibly spend. (p. 58)

Suppose, though, that one grants this part of the case for the free market. Can one still not object that this system subordinates the workers of one country to the vagaries of the world market? Workers are driven out of their jobs by competition from foreign firms that pay low wages.

Here once more the objection to the market fails. Ricardo's law of comparative advantage long ago showed that free trade increases total wealth. Specialization increases the total wealth of the countries that trade; and, Lewis adds with great insight, this applies to jobs as well.

These principles [of comparative advantage] are well established for the import or export of goods. It is not as widely recognized that they are just as relevant for the "outsourcing" of service jobs over the internet or telephone lines. The savings achieved by importing electronic services has enabled many companies to prosper, where they otherwise might have stagnated or failed, and thus to hire more employees rather than fewer. (p. 92)

As often happens, misguided efforts to help the poor worsen their condition. Tariffs make goods more expensive for them, and even Paul Krugman, hardly known for undue partiality to the free market, recognizes the value of free trade for the poor: "[Opponents of global free trade], whatever their intentions, are doing their best to make the poor even poorer" (p. 97, quoting Krugman).

Faced with the undoubted benefits of the market, few today call for its outright abolition. Rather, opponents of the market contend that it must be restrained and guided by a beneficent government. In arguing in this way, though, do they not rely on a very questionable assumption? They believe, without justification, that government officials act to benefit the public.

The primary charge against government is that it is predatory, a devourer of society's capital. But predation is not the whole story. More often than not, government is also corrupt. Moreover, the opportunities for corruption multiply the more deeply government gets into the economy. (p. 152)

But even if government is in most cases corrupt, must we not rely on it in emergencies? Suppose the economy plunges into depression. Surely the government needs to intervene in order to revive the economy. Lewis answers, to the contrary, that the government will do best by following a "hands-off" policy:

Before the 1930s, and the advent of an activist government, there were depressions to be sure, but they were brief … This was in sharp contrast to the Great Depression of the thirties, when falling prices were combated and wages kept artificially high by both the Hoover and Roosevelt administrations. As a direct result, unemployment kept deepening and depression lingered on amidst terrible human suffering. (p. 75)

Lewis's penetrating argument can be strengthened even more by asking, how do depressions arise? Mises, Hayek, and Rothbard have to my mind convincingly shown that government policy, not the market, bears full responsibility. Expansion of bank credit drives the market rate of interest below the natural rate, generating an artificial boom that must eventually collapse. Lewis does not discuss the origins of the Great Depression, but he offers a comprehensive indictment of central banking policy. In the United States, the Federal Reserve System is supposed to stabilize the economy; but the economy was more stable before the system was established than afterwards.

Free-market economists do not all agree about how past economic contractions occurred. But all agreed with [Milton] Friedman's assertion that "The stock of money, prices and output was decidedly more unstable after the establishment of the Reserve System than before." (p. 173)

Supporters of the present order will no doubt say that despite past errors of the Fed, we now know better how to manage things. As Lewis notes, the monetary expansion pursued by Alan Greenspan during his long tenure as Chairman of the Fed hardly inspires confidence that this is so.

Lewis once more shows his skill at summoning an unexpected witness for his case. Alexander Hamilton strongly favored a national bank, but even he drew the line at paper money:

The emitting of paper money by the authority of Government is wisely prohibited … The stamping of paper is an operation so much easier than the laying of taxes, that a government, in the practice of paper emissions, would rarely fail … to indulge itself … even to [the point of creating] an absolute bubble. (pp. 185–86, quoting Hamilton.)

Lewis's presentation of the arguments leaves us in a quandary. If the case for the free market is so strong, why do so many oppose it? For Lewis, as mentioned earlier, the explanation lies in conflicting values. Lewis distinguishes four value systems: fraternalism, reciprocalism, equalitarianism, and philanthropism. He characterizes each of these insightfully, but for our purposes the essential point is this: Some people think that a morality of individual responsibility, characteristic of a free market, is inadequate. People ought to be charitable, acting for the motive of benefiting the unfortunate. Even if the market helps the poor, this is merely an unintended consequence of people's actions.

Lewis does not take sides on these various values, though one gathers that he thinks philanthropism has a good deal to be said for it. He suggests a way in which the various values can be partially reconciled, thus avoiding the need to choose one system and reject the others. He wishes to expand the non-profit sector of the economy, which now "represents about 8% of the U.S. economy, and considerably less elsewhere." (p. 209). 1 In particular, he proposes that private organizations take over as much as possible of the welfare activities of the government.

To achieve this aim, Lewis suggests that donors to charity be able to deduct the full amount of their contribution from taxes:

This would leave the taxpayer with a simple choice; would I prefer my money to go to the government or to charity, since a credit would mean that the government is bearing the full cost. (p. 211)

Readers interested in further elaborations of the plan can consult the book, but the basic idea seems to be one of great importance. Often, supporters of a complete free market must face the objection that, without government welfare, some people could not survive. The standard reply to this is that, in a free market, private charity would attend to these people. Lewis's ingenious idea gives us a way gradually to approach a fully private system.