Another Reason to End the Fed In his first press conference as chairman of the Federal Reserve, Ben Bernanke discussed rising gasoline prices, blaming higher demand from emerging economies and Mideast oil-supply disruptions as the cause of the zooming prices. Bernanke did not mention the US government's role in the higher energy prices,[1] and he explicitly absolved the Federal Reserve of any blame.

According to Bernanke, "there's not much the Federal Reserve can do about gas prices, per se, at least not without derailing growth entirely, which is certainly not the right way to go. After all, the Fed can't create more oil. We don't control the growth rates of emerging market economies." (Here is a transcript and a video of Bernanke's press conference and here is a video of his remarks about gasoline.)

Bernanke's deceitfulness is appalling, although not unexpected. He knows that Federal Reserve monetary policy plays a significant role in gasoline prices. Expansionary monetary policy leads to more dollars being available in world currency markets and weakens the dollar. The weaker dollar results in higher import prices. More than half of the oil consumed in the United States comes from foreign producers, and because oil is the main input needed to produce gasoline, higher oil prices mean higher gasoline prices.

In the last decade, the Federal Reserve has engaged in almost-unprecedented easy monetary policies. The broadest measure of the money supply is called M3. According to estimates at Shadowstats.com, until the financial collapse of 2008, M3 was continuously increasing at a rate anywhere from 5 to 15 percent annually. This money creation by the Federal Reserve led to the unsustainable boom of the Bush years and the economic meltdown that we have experienced in the last three years.

Consider the impact that this has had on gasoline prices. To make the calculations easy, let's say that the current price of gasoline is $4 per gallon. Oil costs are 68 percent of the price of gasoline. That means that oil costs make up $2.72 of the $4 gasoline price. The dollar's depreciation relative to the euro in the last decade was 40 percent; and 40 percent of $2.72 is $1.09. 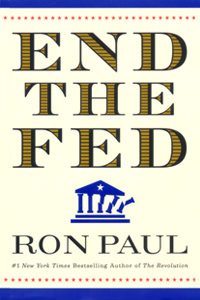 Barack Obama and his attorney general blame high gasoline prices on oil speculators. The chairman of the Federal Reserve blames supply disruptions and the growing economies of the world. We see this all the time. Elected officials and other agents of the state never accept any blame for the destruction created by their policies. Others are always at fault. In this case, however, we can clearly see that the Federal Reserve bears much of the responsibility for the economic damage of high gasoline prices. We can add high oil and gasoline prices to our long list of reasons why we should end the Fed.

[1] In a recent article, I explained how government intervention leads to higher gasoline prices. By imposing taxes on gasoline sales, reducing the supply of oil by taxing oil production, limiting drilling by banning exploration in some areas, and purchasing oil to be stored in the Strategic Petroleum Reserve, the government gouges gasoline buyers and generates profits for OPEC.

[2] Admittedly, other factors such as the inflation of euro and the demand for dollars and euros also affect the dollar-exchange rate. However, the Federal Reserve admits that its policies have a significant effect on exchange rates. See The Federal Reserve: Purposes and Functions, p. 24.