33 Questions About American History You're Not Supposed to Ask 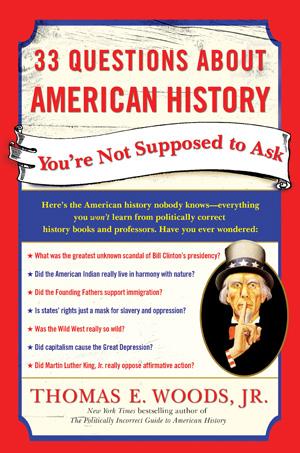 Can you really understand American history without understanding economics? Thomas Woods doesn't think so, which is why he wrote this fabulous, pithy, provocative, and supremely enlightening book.

And guess what? His research, and his training in the Austrian tradition of economics, led him to disagree with the mainstream of American history in many surprising ways.

For example, the Indians didn't save the Pilgrims from starvation by teaching them to grow corn. Thomas Jefferson thought states’ rights—an idea reviled today—were even more important than the Constitution’s checks and balances. The "Wild" West was more peaceful and a lot safer than most modern cities. And the biggest scandal of the Clinton years didn't involve an intern in a blue dress.

In America, where history is riddled with misrepresentations, misunderstandings, and flat-out lies about the people and events that have shaped the nation, there’s the history you know and then there’s the truth.

In 33 Questions About American History You’re Not Supposed to Ask, Thomas E. Woods Jr., the New York Times bestselling author of The Politically Incorrect Guide to American History, sets the record straight with a provocative look at the hidden truths about our nation’s history—the ones that have been buried because they’re too sensitive to discuss. Woods draws on real scholarship—as opposed to the myths, platitudes, and slogans so many other “history” books are based on—to ask and answer tough questions about American history, including:

You’d never know it from the history that’s been handed down to us, but the answer to all those questions is no.

Woods’s eye-opening exploration reveals how much has been whitewashed from the historical record, overlooked, and skewed beyond recognition. More informative than your last U.S. history class, 33 Questions About American History You’re Not Supposed to Ask will have you wondering just how much about your nation’s past you haven’t been told.