GET NEWS AND ARTICLES IN YOUR INBOXPrint
A
A
Home | Wire | Will Our Grandchildren Work Only Four Hours Per Day?

Will Our Grandchildren Work Only Four Hours Per Day?

Chinese billionaire and Alibaba founder Jack Ma predicted this week that in 30 years, people will be working less than they do now. According to NBC:

I think in the next 30 years, people only work four hours a day and maybe four days a week," Ma said. "My grandfather worked 16 hours a day in the farmland and [thought he was] very busy. We work eight hours, five days a week and think we are very busy.

Only time will tell if Ma's prediction will come true in terms of its time horizon and magnitude. But, if the next century follows the pattern of the previous 150 years, we could be looking at continued and significant reductions in total working hours.

Some of the biggest gains are likely to occur in the so-called "developing" world, but even the wealthy West will continue seeing gains in this regard.

For many Americans, at least, comments such as Ma's may cause them to scoff. Remarkably, there still seems to be an impression among many Americans that they are working more hours now than their grandparents did.

This is no doubt true in some specific cases, but overall, the evidence is clear that people are working less now than in the past — with the possible exception of the recent past.

RELATED: "Why Median Incomes Probably Are Really Going Down" by Ryan McMaken 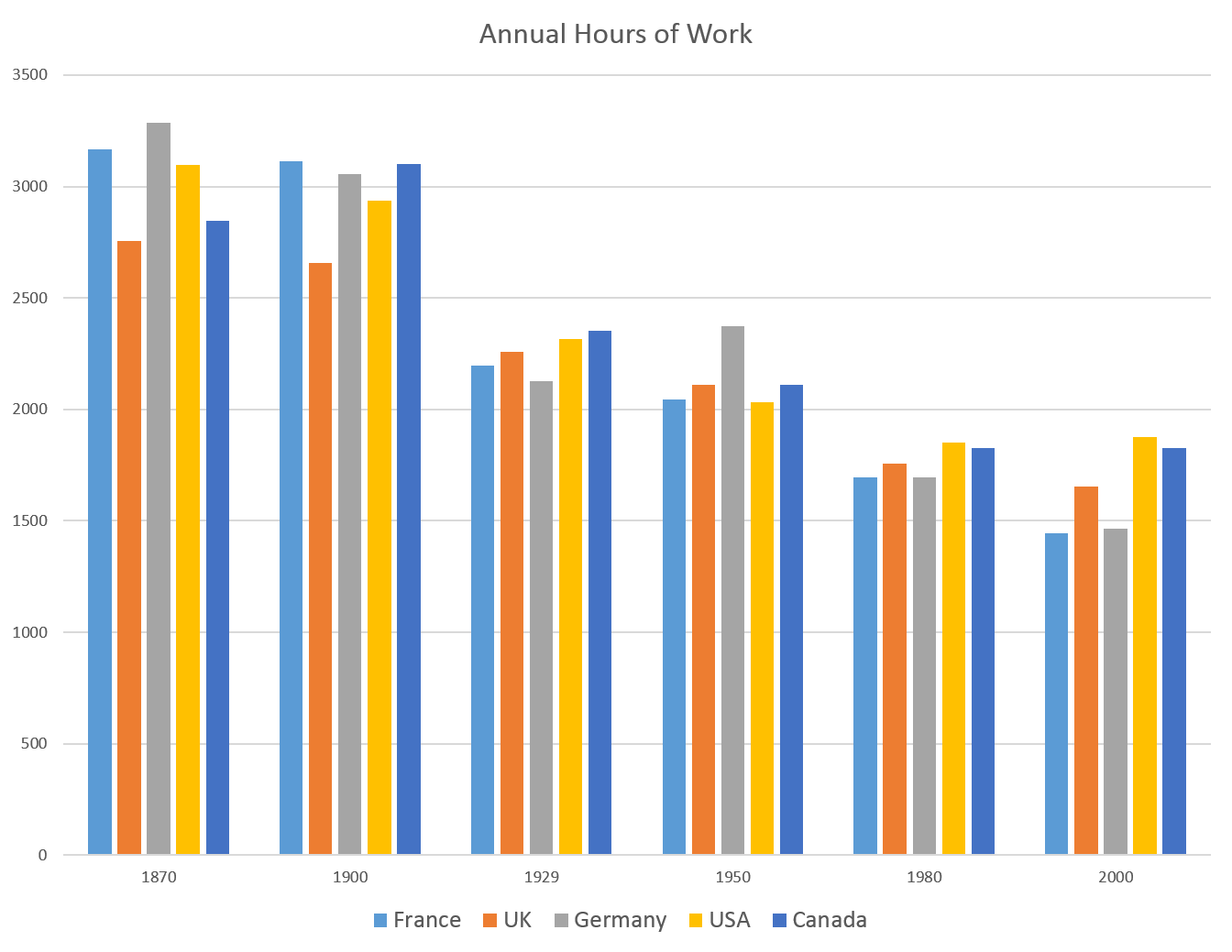 The overall trend is obvious, and only the US, Sweden, and Canada in this sampling of wealthy countries shows something other than a decline from 1980 to 2000.

From 1870 to 2000, though, total work hours declined 39 percent in the United States, 40 percent in the UK, and 55 percent in Germany. While it's certainly possible that some Americans may be working as much as their great-grandparents did, overall, most of us work more than a third less time than they did.

Other studies have shown similar results.

A study by Thomas Juster and Frank Stafford found that from 1965 to 1981 in the United States, “market work” hours per week fell from 51.6 hours to 44 hours for men. For women, market work rose from 18.9 hours to 23.9 hours. We would expect an increase for women over this period as women began to take on “market work” at higher rates than before.

Most of this is thanks to continued progress in worker productivity. As recently explained by Ferghane Azihari at mises.org, we work less for more as capital accumulates and productivity increases. Obviously, our standard of living is higher than that of our grandparents. And yet, we're often working less than they did.

Moreover, our working lives are shorter than they were in the past.

As Ben Powell has noted in his work on sweatshops on child labor, wealthy countries enjoy the luxury of eschewing child labor nearly in its entirety.

By the 20th century, thanks to increasing productivity, the adult members of the family could produce enough to pay a family's expenses in a way that had previously required the labors of the family's 9- and 10-year-olds.

It was the decline in the necessity of child labor that made it feasible to finally outlaw child labor in wealthy countries in the early 20th century. Today, labor activists act as if laws prohibiting child labor were the primary driver behind its decline. It is far more likely that the opposite is true. Namely, that growing wealth allowed for more children to leave the work force. Prohibitions on child labor came only in the late stages of this process. Powell writes:

In the United States, Massachusetts passed the first restriction on child labor in 1842. However, that law and other states’ laws affected child labor nationally very little. By one estimate, more than 25 percent of males between the ages of 10 and 15 participated in the labor force in 1900. Another study of both boys and girls in that age group estimated that more than 18 percent of them were employed in 1900. Economist Carolyn Moehling also found little evidence that minimum-age laws for manufacturing implemented between 1880 and 1910 contributed to the decline in child labor. Similarly, economists Claudia Goldin and Larry Katz examined the period between 1910 and 1939 and found that child labor laws and compulsory school-attendance laws could explain at most 5 percent of the increase in high school enrollment. The United States did not enact a national law limiting child labor until the Fair Labor Standards Act was passed in 1938.

And it wasn't just the children who could afford the new luxury of skipping work.

During this same period, the elderly were beginning to enjoy for the first time the concept of "retirement."

Just as increased productivity had made it possible too for parents to more fully support children with just the parents' wages, so too did these gains make new pension programs — both governmental and private — possible.

After all, the implementation of the Social Security tax would have been a political impossibility in an earlier era when workers were living closer to subsistence levels.Thanks to the surpluses made possible by growing industrialization and worker productivity, both private corporations and government agencies could skim off enough of the surplus to hand over to elderly workers who were no longer actively producing products or services as wage workers.

In [1890 in the US], about two-thirds of men aged 65 and older were still in the labor force — roughly the same proportion found today in developing countries such as Brazil and Mexico. By 1920, that number had dropped to 56 percent, and by 1940 it was down to 42 percent. Today it is 27 percent.

Today, not only are modern workers working fewer hours in many cases, but fewer workers are necessary to produce at least as much wealth.

This is especially true when we look at these trends through a global lens. As Powell notes, child labor declines the most in those countries where real incomes exceed $12,000. The number of countries where this is actually the case continues to expand, just as poverty continues to decline in the developing world.

This isn't to say that everything is perfect or getting better in every way all the time. Nor are the gains evenly distributed. The relative gains being made in recent decades in the US, for example, have slowed as American workers face greater competition from foreign workers. Gone are the days when the European competition was still digging out from the rubble of World War II. Also gone are the days when workers in places like India and Latin America and China offered little competition. Workers in the Western world once had a near monopoly on the benefits of being in close proximity to the world's best capital — including the best factories and the best technology. Nowadays, highly advanced production facilities can be found throughout the world. And this means more competition from workers in the developed world.

Moreover, continued interventionism by states and their central banks may drive real wages and economic opportunities down. Regulations on starting small business, coupled with central-bank driven asset price inflation, takes its toll on earnings for many throughout the world.

Time will tell if war, unchecked government regulation, or some other disaster may put a halt to the declines in working hours we've been enjoying for so long. If not, our descendants will be looking back on five-day weeks the way we should now look at the grueling work schedules of our great-grandparents.

Per Bylund, PhD, is a Senior Fellow of the Mises Institute and Associate Professor of Entrepreneurship and Johnny D...