Will China Trigger the Next Global Recession? | Mises Wire
Skip to main content

GET NEWS AND ARTICLES IN YOUR INBOXPrint
A
A
Home | Wire | Will China Trigger the Next Global Recession?

Will China Trigger the Next Global Recession?

China’s debt growth rate has become the focus of some discussions and, fair enough, from comparing the outright levels, it may seem that China can collapse at any moment. Daniel Fernandez suggested this in his article "Has China Reached Its Debt Limit?" in Mises Wire. In response to the government’s monetary expansion stimulus plan after the 2008 financial crisis, China’s corporate sector did indeed leverage up quickly, followed by an equally fast pace of leveraging in the household sector. However, in order to avoid comparing apples with oranges, we need to take a closer look by putting these numbers into perspective. Using the same data source as used by Fernandez, we find that China’s total debt as a percentage of GDP was 254 percent by the end of 2015. Debt-to-GDP ratio of corporate, government, and household sectors stood at 170 percent, 44 percent, and 40 percent respectively.

For government and household sectors, both started from considerably low levels until the last administration kicked in a four-trillion yuan (RMB) stimulus plan in 2009. Government debt-to-GDP ratio, which was kept in the mid 30s in the first decade of this millennium, now stood at 44 percent by the end of 2015. Household’s debt-to-GDP ratio was at 11 percent in 2006 and almost doubled to 19 percent in 2007 and then doubled again to 40 percent by the end of 2015. The leveraging up of households happened exactly as the Chinese society was undergoing rapid urbanization as well as when the government launched its 2009 stimulus.

Apart from the demand for urban housing, Chinese households, with their high savings rate and extra cash in hands, invested in in real estate as a hedge against future inflation. Furthermore, as the stimulus package allowed for easier lending, household debt increased dramatically. However, we must note that although the debt growth rate was high, the absolute debt level of household is still considerably low versus global peers.

The most disturbing trend is found in the corporate sector, with the debt-to-GDP ratio increased from approximately 110 percent prior to 2009 to 170 percent by the end of 2015. First of all, the level of corporate debt (mostly in the form of bank loans) was high to start with, but is by no means out of the norm for a financial system dominated by the banking sector, whose funding source is mostly deposits. Two figures from Jonathan Anderson’s How To Think About China series provide some insights:1

An international comparison of assets of banking system vs. domestic saving rate: 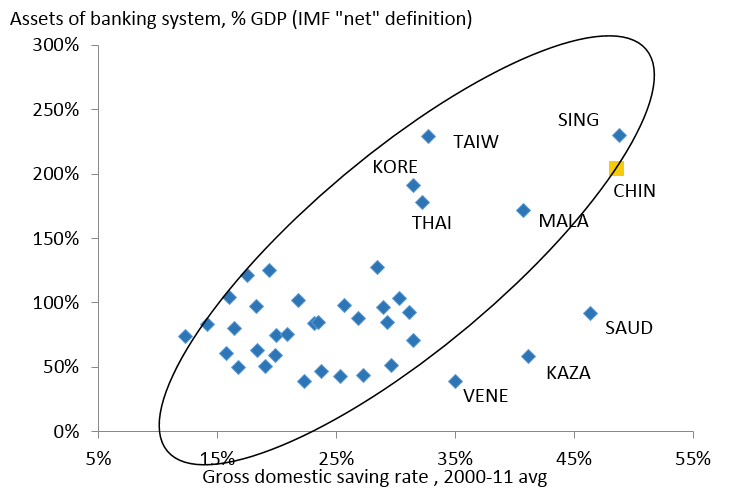 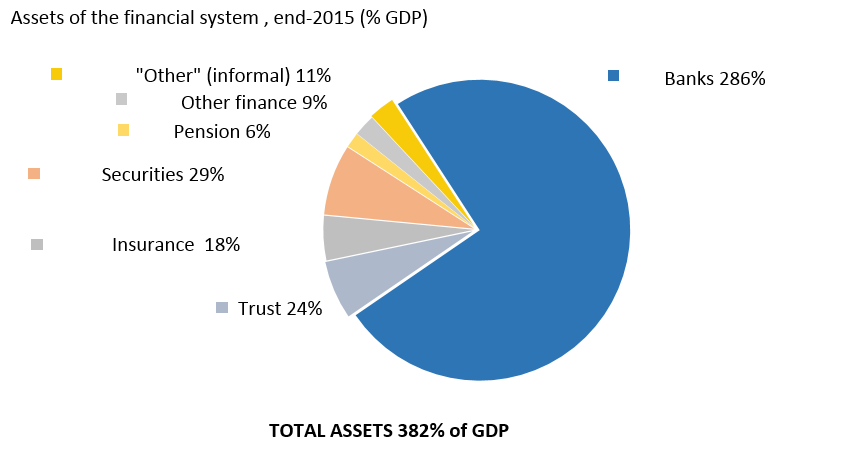 This point can be further demonstrated by comparing financial asset structures, for example, between the US and China. Obviously bank loans are the dominant funding source of the corporate sector in China, whereas in the US the role of bank loans is far from prominent in comparison with its enormous capital markets, where the corporates can raise both equities and bond financing easily. 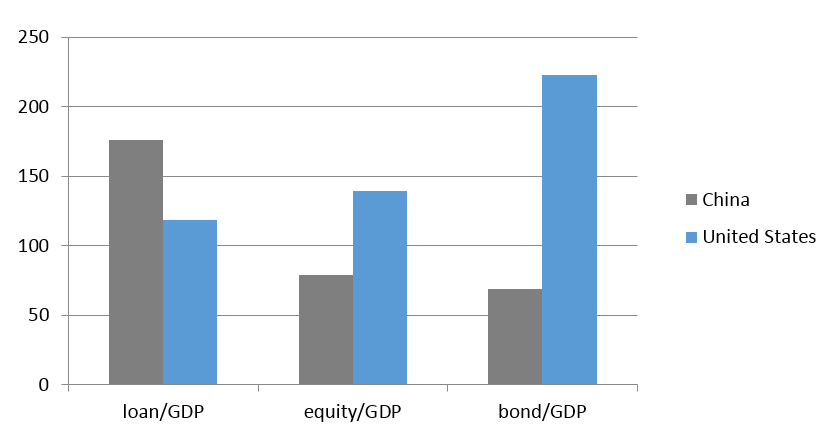 It is, therefore, not surprising that the leveraging up as a response to government’s stimulus plan manifested itself mostly in the credit extension through the banking system.

The large role of the banks can also be seen in China's bond market yields, and one manifestation of this is a flat yield curve. The reason for this is simple: deposits. When banks have more deposits to manage than they can lend out, they invest these deposits into the bond market and usually on the long end to boost yields. This investment strategy (or asset-liability management scheme) bids up the bond prices on the long end, hence pushing down the long-term yields.

In addition, between allocating deposits to these two types of assets (bonds vs. loans), banks sometimes have incentives to invest in bonds, rather than lending, due to the balancing considerations of corporate demand, credit risks, market liquidity, and yields (that are also subject to interest rate controls that are at final stage of liberalization and the lending rate was completely liberalized only in early 2016). So the yield spread, at current stage, reflects more of the combination of China’s financial structure and capital flows rather than being a good indicator of economic fundamentals. As the government flooded the market with four trillion RMB from the stimulus plan in 2009, bond yields faced downward pressure, more so at the long-term end. Please see the yields of Chinese government treasury bonds at maturity (10 years vs. 1 year) and the spread thereof in the below figure. Wealth management products channel a considerable amount of deposits out of the banking system to capture higher yields outside of banking-sector supervision (in form of trusts, for example), but the amount is still not pivotal enough to change the above explained pattern in a fundamental manner. 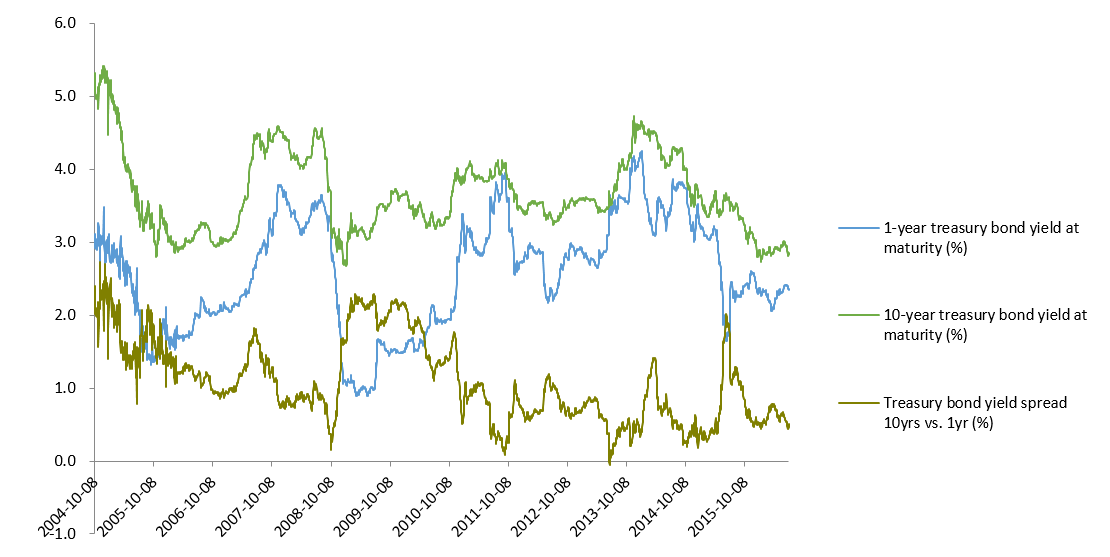 China didn’t open up to the outside world until the very late 1970s. Now China provides half of the manufacturing goods and close to half of electronic products in the world and the economy is still growing at around 6 percent. Obviously a good part of China’s production structure has been configured to export, mostly to the developed economies, which are dominated by the service sector. As the global demand in the developed economies lost its momentum, China faces the necessity of reconfiguring its economic structure to better serve its domestic consumers (which stands at 4 times the number of US consumers). This reconfiguration process is surely painful as demonstrated by the empty factories in the traditional export production oriented cities. But to me, this is more of a textbook case of Austrian economics at work. Capital and labor have to be freed up for those productions currently being demanded by the market. And this takes time. Moreover, quick capital formation in the past three decades lifted labor productivity, with which the manufacturing sector needs to be upgraded and the tertiary sector needs to be expanded to serve a more affluent society comparing with more than 30 years ago, so that Chinese consumers don’t have to go to Japan to buy hi-tech toilet lids.

A Healthier Skepticism of "Stimulus"

Needless to say, the current debt level causes concern and the deeper concern is whether debt growth trajectory will continue. Ultimately, whether or not the debt will grow at the rate of post 2008 stimulus phase is a function of how fast the Chinese government runs the money printing press. A recent article on the People’s Daily — the mouthpiece of China Communist Party (CCP) — quoted the diagnosis from an "authoritative figure" on the Chinese economy and its cure. This “authoritative figure” suggested there should be no more money printing to stimulate the economy and that the Chinese should be prepared for a lower growth rate (comparing with its own historical average of 10 percent). Anyone with an understanding of China's political messaging system would not be mistake it for anything but an opinion handed down from the very top of Chinese leadership. This can be considered a concluding remark on the policy swings for the past several years.

The Xinhua News Agency, the mainstream media group, recently followed with a commentary suggesting resistance to the use of stimulus plans in the face of slowing growth. Xinhua also warned of a disastrous result if its advice is not followed. Messages like these are refreshing to hear nowadays among the mantra of the stimulus chorus around the world. How China’s policy direction is to be implemented remains to be seen, but at least the insidious effects of stimulus is well recognized by those at the top of the regime and openly represented by mainstream media. In addition, a series of measures to lower tax burdens for corporate and households alike are also being introduced, and the central government is pushing hard for business-friendly deregulations and increasing economic freedom.

China has its problems; tons of them. China may or may not be the first to blow up in the coming wave of crises, as many people say. No matter whichever the case, I am more convinced that China will be among the first ones to revive — because it has high savings to invest, it has a well-trained labor force with one of the most vibrant, if not the most complete, manufacturing chain, and the manufacturing sector still contributes to over 40 percent of its GDP. It is still in the middle of a rapid urbanization process. It is not yet a welfare state. Chinese people are fully aware of the fact that their safety net is the result of their own frugality rather than government promises. China has the biggest potential market of 1.3 billion people with a rising middle-class that is still increasing in numbers and share in population. Serving them well is one of the biggest business opportunities in the 21st century.

Rothbard and Market Economics in China

In this interview, Jing Jin, Associate Dean at the China Economics and Management Academy in Beijing, discusses how...