Why Wage Growth Is So Weak

The yearly growth rate of average hourly earnings in production and non-supervisory employment in the private sector eased to 2.3% in June from 2.4% in May.

Many experts are puzzled by the subdued increase in workers earnings. After all, it is held the US economy has been in an expansionary phase for quite some time now. 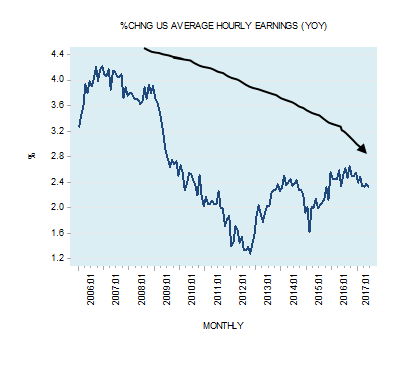 According to the US Government’s own data, since 2000, in terms of industrial production, the US economy has entered a subdued growth phase. (Note that between 1945 to early 2000 the industrial production index had been following a visible uptrend). Therefore, it seems the underlying ability of the economy to grow has been visibly undermined. So from this perspective the slow growth rate in output could be an important reason behind the softer wages growth rate. 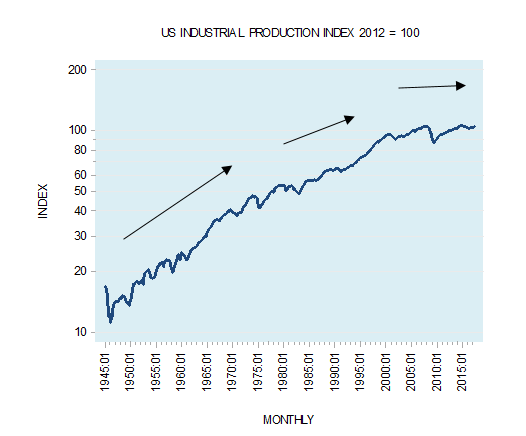 Some commentators such as the vice chairman of the US Federal Reserve Stanley Fischer has suggested that slowing productivity could be an important factor behind all this.

That a fall in the productivity of workers could be an important factor is a good beginning in trying to establish what is really happening. It is however, just the identification of a symptom — it is not the cause of the problem.

Now, higher wages are possible if workers’ contribution to the generation of real wealth is expanding. The more a particular worker generates as far as real wealth is concerned the more he/she can demand in terms of wages.

An important factor that permits a worker to lift productivity is the size and the quality of the infrastructure that is available to him. With better tools and machinery, more output per hour can be generated and hence higher wages can be paid.

It is by allocating a larger slice out of a given pool of real wealth towards the build-up and enhancement of the infrastructure, that more capital goods per worker emerges (more tools and machinery per worker). This sets the platform for higher worker productivity and hence to an expansion in real wealth and thus lifts prospects for higher wages. (With better infrastructure workers can now produce more goods and services).

The key factors that undermine the expansion in the capital goods per worker is an ever expanding government and loose monetary policies of the central bank. Yet many believe that both these institutions play a pivotal role in supporting the economy. According to the popular view, what drives the economy is the demand for goods and services. If, for whatever reasons, insufficient demand emerges, then it is the role of the government and the central bank to strengthen the demand to keep the economy going. Or so it is held.

There is, however, no independent category such as demand that drives an economy. Every demand must be funded by a previous production of wealth. By producing something useful to other individuals an individual can exercise a demand for other useful goods.

Any policy, which artificially boosts demand, leads to consumption that is not backed up by the previous production of wealth. For instance, monetary pumping that is supposedly aimed at lifting the economy in fact generates activities that cannot support themselves. This means that their existence is only possible by diverting real wealth from wealth generators. This in turn weakens wealth generation ability to produce wealth.

The introduction of deregulation of financial markets since early 1980’s has set the platform for massive monetary explosion out of “thin air”. The proponents for less control in financial markets hold that fewer restrictions imply a better use of scarce resources, which leads to the generation of more real wealth.

It is true that a free financial environment is an agent of wealth promotion through the efficient use of scarce real resources, whilst a controlled financial sector stifles the process of real wealth formation. However, it is overlooked by the proponents of the deregulated financial markets that the present financial system has nothing to do with a free market.

What we have at present is a financial system within the framework of the central bank, which promotes monetary inflation and the destruction of the process of real wealth generation through fractional reserve banking.

Prior to the 1980’s financial de-regulation we had controlled banking. Banks’ conduct was guided by the central bank. Within this type of environment bank’s profit margins were nearly predetermined (the Fed imposed interest rate ceilings and controlled short term interest rates) hence the “life” of the banks was quite easy, although boring.

The introduction of financial de-regulations and the dismantling of the Glass – Steagall Act changed all that. The de-regulated environment resulted in fierce competition between banks.

The previously fixed margins were severely curtailed. This in turn called for an increase in volumes of lending in order to maintain the level of profits. In the present central banking framework this increase culminated in an explosion in the credit out of “thin air” — a massive explosion in the money supply. (In the deregulated environment, banks’ ability to amplify Fed’s pumping has enormously increased). 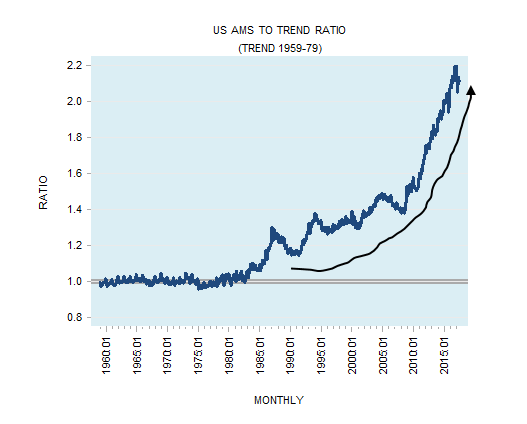 From this, it follows that in the present banking system what is required to reduce a further weakening of the real wealth generation process and thus the erosion of workers earnings is to introduce tighter controls on banks.

According to Murray Rothbard in Making Economic Sense,

Many free – market advocates wonder: why is it that I am champion of free markets, privatization, and deregulation everywhere else, but not in the banking system? The answer should now be clear: Banking is not a legitimate industry, providing legitimate service, so long as it continues to be a system of fractional-reserve banking: that is, the fraudulent making of contracts that it is impossible to honor.

Note that I'm not advocating here for suppressing the free market, but suppressing banks’ ability to generate credit out of “thin air.” This is only an issue because the present banking system has nothing to do with a market-based banking system.

Money Supply Growth Is Slowing—That Points to a Slowing Economy

Easy money monetary policy only serves to weaken and destroy savings and investment. And that means weaker future...