Why Large, Local Legislatures Are Better than the EU Parliament | Mises Wire
Skip to main content

GET NEWS AND ARTICLES IN YOUR INBOXPrint
A
A
Home | Wire | Why Large, Local Legislatures Are Better than the EU Parliament

Why Large, Local Legislatures Are Better than the EU Parliament

One of the biggest weaknesses in the EU's argument against secession from the EU is the fact that the EU is so very undemocratic. Whatever one thinks of democracy, the fact remains that Europeans tend to favor it, so the EU's significant deficit on democratic representation in EU institutions has been a big problem in selling the EU to the masses. The EU recognized this in the Brexit debate, which is why EU supporters have focused almost entirely on economic claims.

(This article from the BBC explains how laws are handed down by the EU, many of which create unalterable mandates for national legislatures.)

Constituency Size Is Huge in the EU

Moreover, even if the EU Parliament were more powerful it would continue to be remote from the actual voters. For the average UK voter, for example, the EU Parliament is physically distant (meeting in France), and is unrepresentative of the voters in the fact there are only 73 representatives (MEPs) from the UK in the European Parliament. That comes out to only one MEP per 891,000 UK residents. Thus, even if one's MEP is in town, it's nearly impossible to get the MEP's attention given the sheer size of the constituency.

Indeed, constituent sizes for MEPs are huge by more traditional Western European standards. This means less engagement between voters and MEPS, a more remote government, and representatives that cannot possibly represent the true level of economic, ethnic, and ideological diversity within the district (which is much higher in a larger district). Moreover, MEPs serve for five-year terms which means they don't need to spend much time in their districts, except when election time is approaching.

Mark Thornton of the Mises Institute has done two empirical analysis on this issue with George S. Ford and Marc Ulrich. Their conclusion is that larger constituency size leads to higher rates of government spending. In a 2006 article in the Journal of Public Finance and Public Choice, "Constituency Size and Growth of Public Expenditures: The Case of the United Kingdom," Thornton et all find "that the tendencies for legislature size to remain relatively stable while population increases over time combines to increase constituency size and, consequently, government spending." (See here for an earlier study by Thornton and Ulrich on a similar topic.)

The largest countries tend to have the largest imbalance between representative and constituency size: 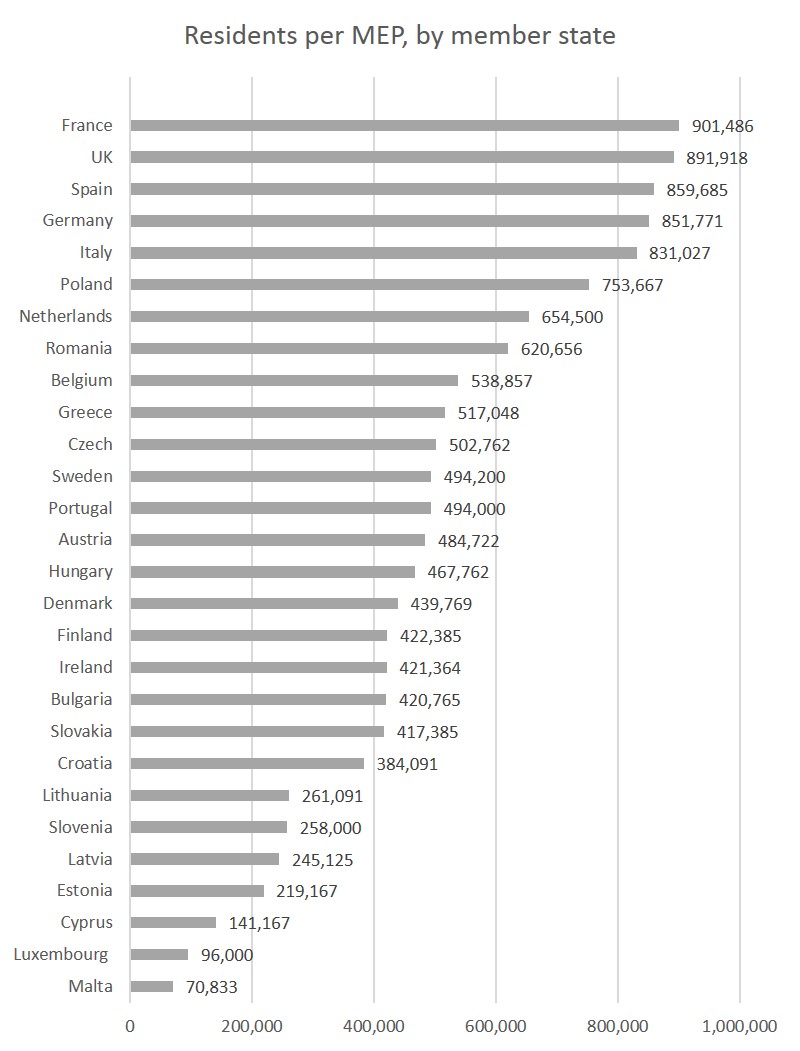 Also problematic for voters has been the fact that the national legislature has not ability to veto or modify EU laws once passed by EU institutions.

So, in practice, not only is the UK quite outnumbered in the EU parliament, but only 73 UK MEPS represent a country of 65 million people.

Indeed, given the structure of EU institutions like the EU Parliament, British laws could be made entirely by people who don't live in Britain. Similar situations exist, of course, for every member state.

Constituency Size at the National Level

When contrasted with the the UK Parliament, these numbers begin to look quite undemocratic indeed.

With 650 seats in the House of Commons in the UK, there are approximately 100,000 residents per MP in the United Kingdom. That's still too large, but certainly better than the situation in the EU. Moreover, the UK capital is physically located in a far more accessible location for the average UK resident, and MPs are far more accessible with smaller — and thus more uniform — districts that are likely to elect to representatives that actually have something in common with the people who are supposed to be represented by the MP. 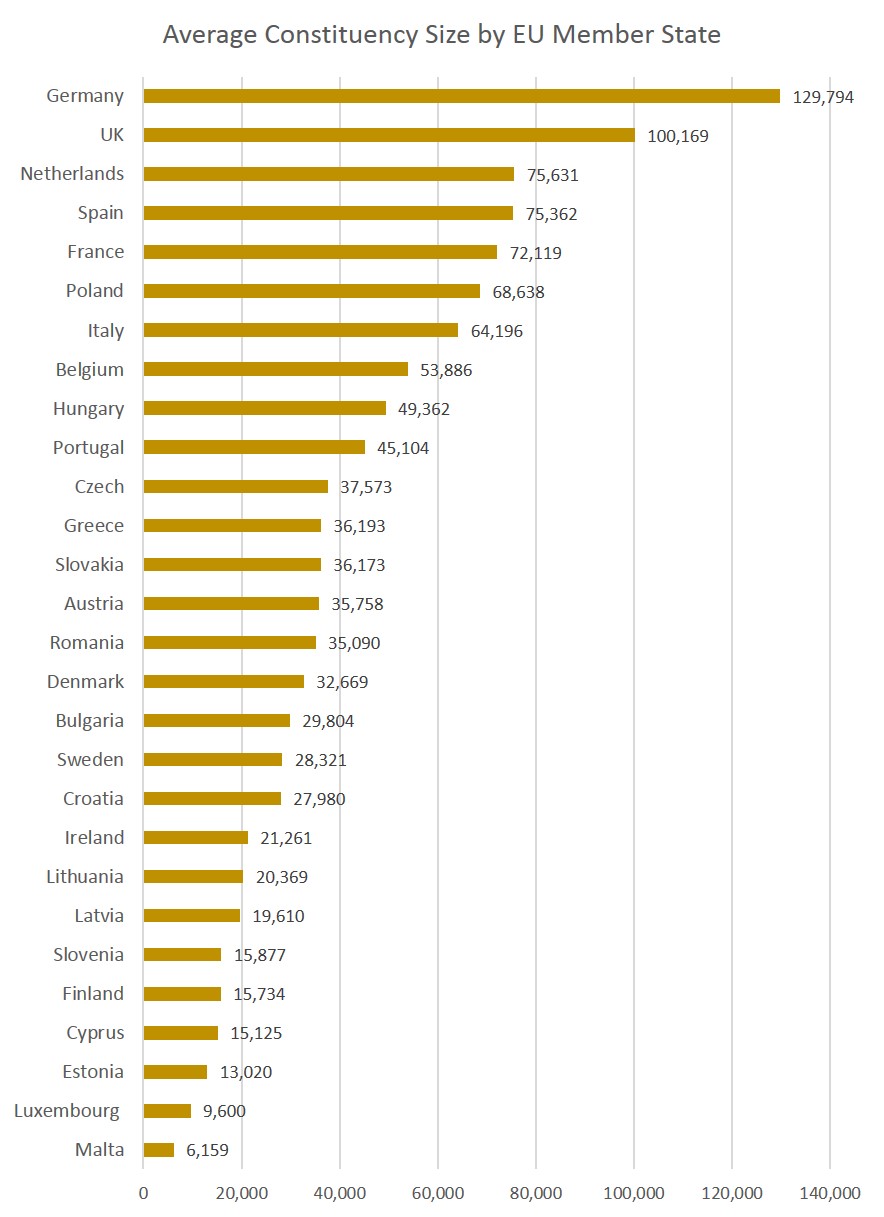 The UK still has large constituency sizes overall, the the size in the UK Parliament is a mere fraction of what it is in the EU Parliament: 100,000 compared to 891,000.

As constituency size decreases, the easier it is for voters to personally know their representative, and the more likely voters and MPs are to have something in common in terms of cultural, economic, religious, or linguistic background. More legislators mean more access in terms of the cost of influencing a single member of a legislature, and in terms of getting on a member's calendar and meeting with him or per personally. Moreover, the larger a constituency becomes, the less valuable each vote becomes both to the candidate and the voter, thus putting greater emphasis on mass marketing, sloganeering, and an emphasis on broad, vague issues rather than on specific local concerns. It is also telling that people like David Cameron have in the past lead efforts to make constituency sizes larger.

The Benefits of Being Small

Elsewhere at mises.org, we've already addressed some of the advantages of being a small country, such as the fact that smaller countries tend to be richer, ceteris paribus.

In this regard, smaller countries also fare better. That is, they tend to provide more legislative access to ordinary people. In the case of Luxembourg, for example — the wealthiest country in the EU, when measured by income — there are only 9,600 people per member of the national Chamber of Deputies. Among larger countries, such as Sweden, the number is only 28,000. Denmark comes in at 32,699.

Looking at numbers like these, many often argue that it is "impractical" for larger countries to enjoy political representation on the scale found in Luxembourg or Ireland. An alternative argument, however, might be that large countries with less access to lawmakers are simply too large, and should be either downsized or decentralized.

This certainly seems to be the case with the EU. It would be one thing if the EU concerned itself with highly specific goals of continent-wide interest, such as the physical defense of Europe from outside invasion or terrorism. But the EU concerns itself with every manner of regulation, covering the minutiae of agriculture policy right down to the use of vacuum cleaners. Moreover, once these laws are passed, the member states cannot veto or change them.

This lack of local control and local veto is justified by Europhiles on the grounds that the member states receive representation through the EU Parliament. But as we have seen, few ordinary people have any chance of influencing what happens within EU lawmaking bodies. Even if the EU Parliament had greater power than it does, it wold still be remote, inaccessible, and unrepresentative.

There would be ways to mitigate these problems. One solution might be to require a "double majority" vote on each EU law. That is, in addition to approval from a majority of the EU Parliament, a majority — or perhaps 2/3rds or 3/4ths — of the member states must also approve of a new law. Obviously, this would lead to far fewer EU laws, and much more engagement with the voters in each member country. That's the last thing the EU wants. So, the EU prefers to keep things out of reach of the taxpayers and citizens in member states instead.

It's little wonder that many voters in the UK opted for a system where ordinary citizens are more likely to have even a small hope of being heard.

Note on methods: I have excluded the House of Lords from the data in this case, since that body is now basically an advisory body only, and because it is unelected. In the case of bicameral legislatures elsewhere, I have included representatives from both upper and lower houses in calculations.

The Purpose of Political Demigods like Lincoln and the "Founding Fathers"

How do we convince people to submit themselves to the regime or to even die for it? Convince them that the regime was founded and sustained by a breed of superhuman "statesmen" like Wilson, Lincoln, and the "Founding Fathers."

Per Bylund is assistant professor of entrepreneurship & Records-Johnston Professor of Free Enterprise in the...